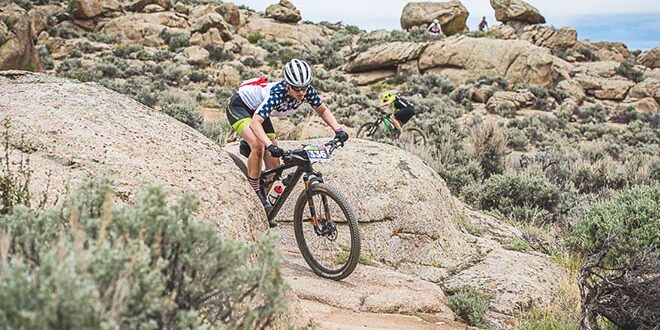 The 14th annual Growler bike race event is set for this weekend with races slated for the Hartman Rocks trail system Saturday and Sunday, May 28-29. The race is put on by Gunnison Trails and it is their major fundraiser for the organization. But this year organizers are turning it up a notch, they have partnered with Mountain Flyer Magazine to create Flow State, adding a bike festival to the race weekend.

“Other races on the calendar have a festival vibe and we don’t have the bandwidth to offer that so we’re really excited to partner with them and bring it here,” says Gunnison Trails executive director Tim Kugler.

The races themselves continue to be one of the premier events of the summer drawing 700 riders, most of whom come from outside of the Gunnison Valley, to compete in three races over the two days.

“We definitely got some folks that travel far and wide,” says Kugler.

It all kicks off with the Classic Growler on Saturday, May 28 in downtown Gunnison at IOOF Park with the infamous shotgun start at 9 a.m. Three hundred and fifty riders will then head out of town bound for a 32-mile tour of the Hartman Rocks trail system.

The Gunnison Trails crew has been hard at work for the past couple of months with general maintenance and are out there this week to get the courses ready for race weekend.

“Crews are out there doing general maintenance and this week fixing some big whups that have formed and doing some last-minute course buffing,” says Kugler.

Mother Nature stepped in to help out as well with some recent precipitation to knock down the dust last week.

“The trails were getting pretty dusty, but we just got three inches of snow which was needed and the flowering plants are running full color,” says Kugler. “It’s about as good as it gets.”

Organizers, volunteers and some hardcore racers will then rest, recover and reboot for two more races on Sunday, May 29, the Big Bad 40 and the Pup 20 starting at IOOF Park in downtown Gunnison at 7 a.m. Both of these races replaced the notorious 64-mile sufferfest race of the past starting in 2019.

“That one was always tough to fill,” says Kugler. “The 40 is cool because it adds on the Aberdeen Loop and it covers all but five miles of the trails at Hartman Rocks.”

The Pup 20 has gained massive traction as well covering several of the trails closer to the parking lot and opening the race weekend to another cross section of mountain bike riders.

“The 20-mile loop is just a little more friendly for people looking to get into racing and we’ve seen a lot more middle school and high school kids sign up which is pretty neat,” says Kugler.

As always, spectating is encouraged and while the trails are not closed to the public on either day, the races should be over by 1 p.m. both days so if you want to ride Hartman Rocks, just be mindful of racers.

“Come out and cheer folks on,” says Kugler. “We can’t close Hartman Rocks but be respectful and conscious that there’s a lot of racers on the course and we do ask the public to not ride the course backwards.”

All information regarding the racecourse route can be found at originalgrowler.com.

As for Flow State, it will be running concurrently with the Growler races bringing live music, bike demos, guided rides, camping and all things mountain bike to Gunnison as well and headquartered at the I Bar Ranch.

“We did one in Vermont last year and it worked really well and we saw the chance to bring it to Gunnison,” explains Riepe. “It’s a great way to tie the cycling community together and raise some money for trail organizations like Gunnison Trails.”

“He’s pumped to bring it to Gunnison and the partnership with the I Bar Ranch makes this event really unique,” says Riepe. “It’ll help take some of the impact off of the public lands that weekend.”

Riepe points out that the Gunnison Valley has been known for its capacity to burn the candle at both ends and sees this as the perfect location for bike racing and extra curriculars that should take hold over the years.

“It’s the first year so it may be relatively small but has a lot of room to grow,” says Riepe.

All information regarding Flow State can be found at flowstatemtbfestival.com.