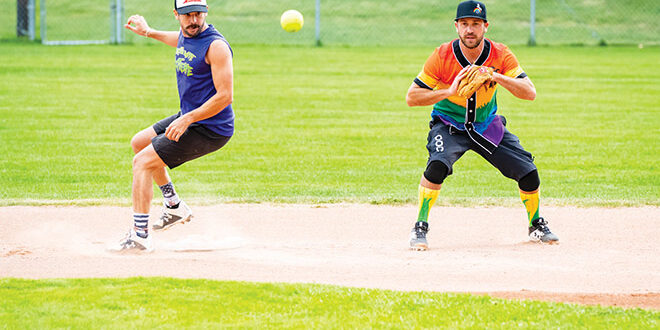 Here we go again. Much like the wildebeest migration in Africa, softball players north of Round Mountain begin their migration in Crested Butte to the local softball fields in June. In fact, the migration has already begun as players have been flocking to the local fields for some preseason workouts the past week or so, all to prepare for opening day of the 2022 softball season on Tuesday, May 31 at Pitsker and Gothic fields.

Not much has changed from last season in the local softball leagues with eight teams signed up for the Tuesday/Thursday league, aka competitive league, and nine teams (hopefully 10 for scheduling simplicity) registered for the Wednesday league, aka rec league.

One of the more notable changes to the local rosters is the loss of a couple softball standouts from recent years. Eli Fiddler and Amanda Brack have taken their games to the next level and are rumored to have been picked up by a couple of semi-pro softball teams in California. Other than that, the teams, and their subsequent rosters, appear to be standard…ish.

There are additional rumors of players perhaps switching teams, whether they are following their hearts or a title, but that remains to be seen on opening day.

There are a couple of small tweaks to both the schedules and the rules. With the advent of a more robust little league team for kids ages 13-15, some field use has been tweaked to accommodate the young guns, but Slattery assures everyone there is no reason to panic as times and days will stay the same, just certain fields may be more in play for softball than others.

“It’s kind of funky but not really,” says Slattery.

Two things Slattery is committed to clearing up for the season are what makes a game official and when is a runner safe at home.

There were some tempers during the playoffs last year regarding what makes a game official, so Slattery is going to ensure it is clear from day one of the season. A game is official once the fourth inning is completed.

As for when a runner is safe at home, you will recall, or you may not, years ago collisions at home plate had the softball committee and parks and recreation staff create a line as an extension of home plate to eliminate collisions. Since then, if a player was in the air over the line at the point a fielding player caught the ball while touching home plate, the runner was safe. That is now changed for this season.

“You have to touch past the chalk or on the chalk, it’s not just when you break the plane,” explains Slattery. “It’s not football.”

Game times remain the same, 5 and 6:30 p.m., at any one of the three magnificent fields in town. Now, the only question remains, after years of clawing their way to a title, can Elevate continue and repeat?

See you in the stands.