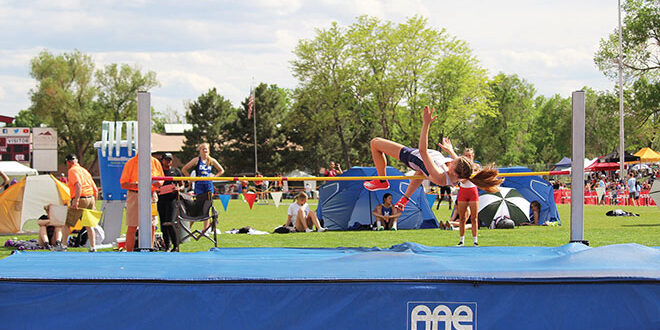 It was quite the conclusion to the 2022 track and field season as a storm flew through the Front Range forcing organizers to adjust, delay, readjust and even extend the state championships into Sunday to pull it off. In the end, local  CBCS seniors Sam Merck and Hayes Freeman put the finishing touches on their high school careers and junior Ruby Pendy continued her ascent among her 2A distance running counterparts.

The three athletes and Meilak headed to Jeffco Stadium on Thursday, May 19 knowing full well of the impending storm. Fortunately, it was not set to hit until Friday so the first day of competition on Thursday went off including Merck’s high jump event. Although, it was a toasty 90-plus degrees, never a good temperature for Titans athletes.

Merck closed out her high school career jumping to a 13th place finish in the high jump, not quite reaching the height she can reach over the bar.

“She did great,” says Meilak. “Not her best jump but certainly not her worst.”

Then the storm hit, and everything was thrown into chaos as Friday events were postponed to Saturday, including Freeman’s event, the long jump.

“We just did a flurry of activities,” says Meilak.

Once the new schedule was posted for Saturday, Freeman was scheduled to jump at 5 p.m. giving the athletes even more free time.

“We just did a bunch more fun activities and tried to keep the girls moving,” says Meilak.

Once the time hit, Freeman toed the line in the long jump and finished her high school career with a 20th place finish.

The 2A state championships concluded on Sunday, May 22 and it was time for Pendy to race in the 1,600 meters. Pendy had been battling an illness for the past couple of weeks and while not feeling 100%, she placed sixth with a time of 5:38 and stepped onto the 2A state podium.

“She was hoping to run closer to 5:20 but said her legs were feeling heavy,” says Meilak. “She still ran a great race.”

The Titans will lose four seniors to graduation with a gaggle of up-and-comers who tested the waters of high school track this year and are primed to continue building in the years to come.

“It’s a super young team and we have some exciting prospects,” says Meilak. “It was one of the best seasons for positive energy and team spirit and that’s what makes a team, talent plus team spirit.”