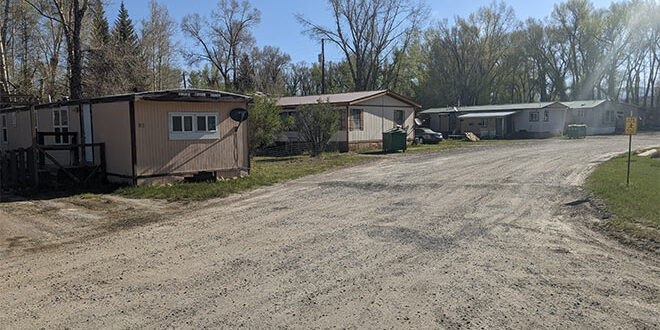 The former Country Meadows mobile home park just north of the City of Gunnison has undergone an ownership transition this spring, and with it has come housing insecurity for many who live there. After residents’ unsuccessful efforts to acquire the property for themselves, the new property owner has changed the park’s name and increased rent by more than 70% in the first few weeks of ownership. Residents report that maintenance of the property has ceased, and some are currently without water. Gunnison County representatives are hoping to work with the new owners, and legislation offering better protection to mobile home park residents has just been signed by Governor Jared Polis—but in the meantime hundreds of Gunnison County residents who own their mobile homes but not the land underneath them are reviewing their rights and limited options amidst a local housing crisis.

The mobile home park located on 8.7 acres off Highway 135 near Garlic Mike’s includes 72 lots and at least 57 structures, according to the Gunnison County assessor.  An estimated 350 to 400 people live there.

“We didn’t get any information. They won’t talk to us,” says Peggy Johnson, a four-year resident of the park. Her daughter, Elizabeth McGee, is vice president of the homeowner’s association (HOA) formed last summer when residents were first informed that the property was up for sale with a pending offer. A new law had required the residents be given 90 days’ notice before an offer could be accepted.

McGee lives in the same row of mobile homes as her mother, toward the back of the park. She has been active with the HOA, which obtained legal representation last year with the help of Gunnison County representatives and mobile home community advocates to work with the former owner, River Walk Village, LLC and to make their own offer on the property. But River Walk Village did not—and was not legally bound to—respond to its residents’ bids. River Walk instead sold the property to a newly formed Ski Town Village, LLC of Denver on April 28 for $2.95 million. According to Colorado Secretary of State records, Ski Town Village was formed on that same day.

The new owner sent a letter to all tenants dated April 29 informing them of two major changes.

“We are writing to inform you that the Country Meadows Mobile Home Park has been sold and the name is being changed to Ski Town Village. Effective immediately, no former representative or employee of the seller has authority to act on our behalf in any capacity,” according to the letter. While the current monthly rent of $425 is to remain in place for May and June, “Starting on July 1, 2022, the new rent for each space is increasing to $725 per month.”

The letter named John Romero as the chief executive officer of the company, listed his phone number and listed a second phone number for any maintenance concerns.

“We look forward to working with you all and to making some improvements around the property. If you have questions, please feel free to call, go online or write to us,” the letter concluded. The website skitownvillage.com appears on the letterhead, and the website lists the contact numbers and the park’s physical address, but little else.

McGee says she received her letter on May 4 and has contacted Romero several times since. She says she invited him to a community meeting at the park and to an HOA director’s meeting, but he has not shown up. “I’m not giving up yet though,” she says.  “I’m fighting as hard as I can to keep everyone here together.”

Johnson says she is growing increasingly concerned by the lack of communication.

“We’ve had a lot of water issues. Some people here haven’t had water for two days. It comes on and goes back off,” she says. “And when the water goes off they don’t give us any information. Maintenance stopped a few months ago.” She notes the same large brush pile that has been sitting by the creek for over a year, and the fallen branches scattered around the property after high winds and the disrepair of the unpaved roads.

Yet Johnson says her plan is to keep paying the higher rent, hoping for better maintenance, because there aren’t many other options available.

“We all feel like he’s trying to push us out. And the way housing is in Gunnison County, it’s bad for working people right now. A lot of people have been here for a long time. And a lot of us are on disability,” she says.

Johnson takes care of the home and homeschools her 13-year-old grandson most days while her stepdaughter is at work. She says she loves living there, “If only we didn’t have to go through all the chaos.”

Johnson also has three other sisters, and a brother in Gunnison County, and raised her own children in the valley.

Gunnison County assistant county manager for community and economic development Cathie Pagano and her staff have been a part of the county’s efforts to help the mobile home community throughout the past year. She said that she has reached out to Romero since the property sold, “But have not connected with him yet. I will be reaching out in writing to Mr. Romero and the contact for Ski Town Village LLC,” she wrote in an email to the Crested Butte News.

Colorado Senate Bill 160 that passed last week allocates $35 million to aid programs across Colorado in preserving mobile home communities, establishing a revolving loan and grant program to assist those seeking to purchase their communities. It also gives mobile home park owners first rights of refusal to buy a property from the owners.

“This is the most important piece of legislation I believe we’ve worked on,” says Gunnison County commissioner Liz Smith.  Smith helped draft aspects of the bill and gave testimony to both the state representatives and state senate during the last legislative session based on what she saw happening at Country Meadows/Ski Town Village.

“My comments in support of the legislation were oriented around strengthening residents’ opportunity to purchase based on our experience with Country Meadows residents,” says Smith. “They also included support for the clarification of processes and penalties for landlords who fail to respond to subpoenas from DOLA for health and safety violations.”

River Walk had failed to respond to such subpoenas from DOLA regarding Country Meadows’ health and safety violations, and there was no recourse available at the time.

Smith says the legislation was also able to address liability issues that may prevent local governments from assisting as assignees in transactions on behalf of resident owned communities.

“What’s happening at Country Meadows epitomizes much of what’s happening in Gunnison Valley and across the state. A lot of people have expressed concerns about how our community is growing. It’s more accurate to say that much of the growth has already happened through displacement, and we’re now trying to figure out how to retain the community that’s being pushed out. What do we expect is going to happen when lot rent in some of the most attainable opportunities for workforce housing increases by 70%?” she summarized.

Governor Polis insisted that rent control be removed from the bill in order to sign it, but Smith says there’s a lot of momentum to work in that direction.

Smith and McGee both point out the same particularly frustrating aspect of the Country Meadows situation: that the residents had organized to make their own offer on the property for the same price the property sold.

“Their rent would have gone up an estimated $90,” says Smith, as opposed to the $300 it will now increase. “But the owner chose not to engage with them at all.”

As for the new owner and their plans for the park, both Romero and the Ski Town Village maintenance line were contacted for this story but had not responded to the CB News as of press time.