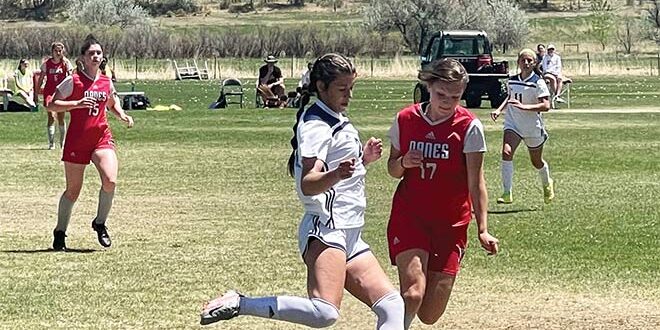 The Crested Butte Titans girls’ soccer team rattled off two state tournament wins in two days last weekend to advance to the 2A state soccer tournament semifinals and will host the number three seed, Lamar, at Katy O. Rady field at Western Colorado University on Saturday, May 21 at 5:30 p.m.

The Titans entered the 2A tournament as the 10th seed and drew seventh seeded Buena Vista in the first round on Friday, May 13. Buena Vista is a familiar foe for Crested Butte having met them during the regular season.

“We were pretty excited to get Buena Vista in the first round because we’d played them, beaten them and knew how they played,” says head coach Heather Culley.

The Titans jumped out to a 2-0 lead on Buena Vista as Maddie Bogard followed on a shot by Ellie O’Neal to punch home the rebound and then continued pressure from Crested Butte led to a Buena Vista own goal.

“We were in their half most of the time,” says Culley.

Buena Vista pulled within one just before halftime as a wind assisted corner kick curved into the Titans’ net, but Culley and the team stayed the course as they took the field in the second half.

“We didn’t want to change anything, just keep playing how we were playing,” says Culley.

Midway through the second half O’Neal and Bogard connected again as a blocked shot from O’Neal looked to be trickling over the goal line, but Bogard followed to tap it over the line for sure for a 3-1 Titans’ lead.

Things got a little nervy down the stretch as Buena Vista earned a penalty kick and scored but Crested Butte managed to hold on through the final minutes to seal the win and advance to the quarterfinals.

“It was a mix at the end of the game of chaotic and being in control,” says Culley.

The team stuck around to watch the first half of the next game as they would face the winner of Loveland Classical and the second seeded Fountain Valley Danes. The Danes went on to win that game setting the Titans up for a familiar challenge the next day on Saturday, May 14.

“They have one girl who scored 35 goals and so they just boot it up and have her run onto it,” says Culley.

It’s a similar style the Titans saw with teams like Buena Vista as well as Telluride.

“We were excited, not really nervous,” says Culley. “We told Teagan (Turner) her job was to annoy her and stay on her the whole time and it worked,” says Culley.

The two teams battled through a physical first half and while each team had some chances on net, they headed into halftime notched in a 0-0 tie.

The Titans stuck with their plan in the second half and in the 60th minute, O’Neal slipped through the Danes’ back line to tuck the ball past their keeper for a 1-0 Titans’ lead.

Once again Crested Butte was tasked with protecting their lead and, once again, they did it to be the only team to hold Fountain Valley scoreless all season.

“We were tired, they were tired, the game got more physical and the ball was flying from one end to another, but we did not back down, we just kept pushing,” says Culley. “I think the girls really stepped their game up.”

The win earned Crested Butte a trip to the state semifinals where they will face third-seeded Lamar right here in the Gunnison Valley. Katy O. Rady field on the Western campus was picked as the host field for the 2A state semifinals so the Titans will host Lamar on Saturday, May 21, kickoff is at 5:30 p.m. Tickets for the game must be purchased online prior to the game at https://gofan.co/app/school/CHSAA. If you can’t make it to the game, you can still watch it live online on nfhsnetwork.com.

A win on Saturday will send the Titans to the 2A state finals for the first time ever. The finals are Wednesday at 5:30 p.m. at Dick’s Sporting Goods Park.