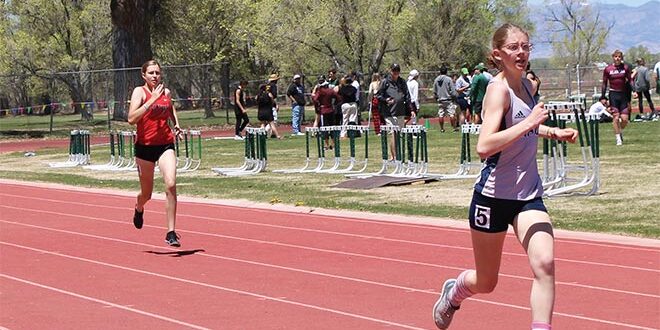 The Crested Butte Titans track team closed out the regular season at the Last Chance meet in Monte Vista on Friday, May 13 and brought home some serious hardware and posted a slew of personal records (PR) to finish on a high note.

Once the numbers were crunched statewide, three Titans earned spots at the 2A state championships as senior Samantha Merck will compete in the high jump, senior Hayes Freeman in the long jump and junior Ruby Pendy will run in the 1,600 meters.

The final tally of podium finishes at the Last Chance meet for the Titans is somewhat staggering as they posted three wins, four second place finishes and three third place results. In addition, the team littered the top 10 with Titans as the boys team finished fifth out of 16 teams and the girls finished sixth out of 15 teams.

“The meet was awesome,” says coach Christa Meilak. “We had a bucket full of medals and continued to get some crazy PRs.”

While Merck, Freeman and Pendy were pretty much guaranteed spots in the state championships prior to the final meet, the girls 4×800-meter relay team was knocking on the door. The team was missing Pendy to illness for their final shot at state, so Mandala Covey-Bleiberg stepped in for her to run with Merck, Katie and Piper O’Neill. The team finished second in Monte Vista with a season’s best time by 10 seconds but once the list came out on Monday, they ended up out of the mix.

“They put down a great time and we thought it was enough, but they just got bumped out by one spot,” says Meilak.

While several Titans were out of reach of making it to state that final day, their work throughout the season continued to pay off as nearly every athlete appeared to peak in their final event.

Freshman Jake Pendy hit the five-minute mark to set a new PR and win the mile and senior Cormac Billick wasn’t too far behind in fifth place with a PR time.

Merck won the high jump in Monte Vista as well and senior Piper O’Neill was the third Titan to take home a win in the 800 meters causing teammate Pendy to ask her following the race, “So how does it feel to win it all?” Sister and senior Katie O’Neill placed third in the 800 meters as well and Piper also joined Merck, Freeman and sophomore India Nornes to place third in the 4×200-meter relay.

Freshmen Sam and Kenny Bullock did some damage in the distance and middle-distance events and both junior Kelsey Clifton and sophomore Asher Arell had strong showings in the hurdle events with Arell placing third in his race and Clifton fifth in hers.

The list goes on and on for PR efforts in Monte Vista and Meilak and coach Shari Sullivan-Marshall were overwhelmed but the Titans’ effort to the very end.

“The ultimate focus this season was for everybody to stay healthy, stay strong and improve and they all did that,” says Meilak. “Shari and I were just so pleased with the final meet. Not just with results but with the team spirit, Titan pride all the way to the end. They put in 110% to the very end. It was a great way to end the season with everybody.”

Merck, Freeman and Pendy now have a couple of days to fine-tune as they get ready for the 2A state championships at Jeffco Stadium Thursday through Saturday, May 19-21.

“We’re going for some of those top podium spots, we’ll see what they got,” says Meilak. “They know what to do, they all have it in them.”