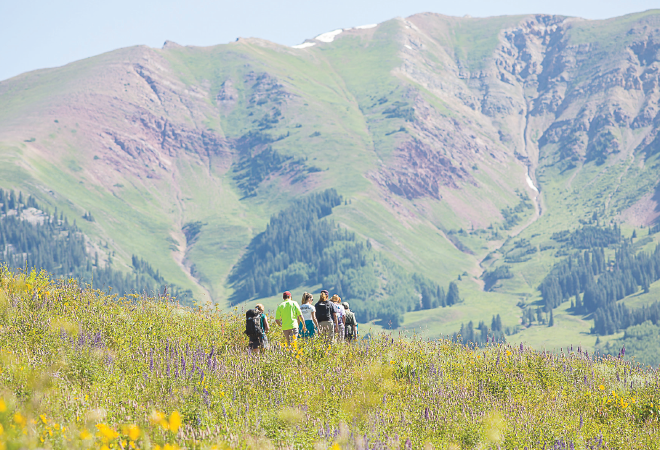 “Bucking the trend” on air

The Gunnison County Tourism and Prosperity Partnership (TAPP) is expecting a solid summer and fall season of visitation in the Gunnison Valley, and their focus will be on promoting air travel, trail stewardship and those who appreciate and respect public lands. The shift is also more long-term, with steadily building air markets and a new focus on gravel biking.

“We have 32% more seats coming in this summer than last summer,” says TAPP marketing director Andrew Sandstrom. That tally was taken before boutique air carrier JSX announced summer service from Dallas would be coming into Gunnison starting in June.

While most other mountain town airports have reported decreasing capacity, Gunnison-Crested Butte regional airport (GUC) is having an opportune moment. “We lost some service in Houston but have gained in Denver,” says Sandstrom.

The plan is to focus the Denver service marketing less on geography and more on interests, and Sandstrom says TAPP has a nationwide campaign to target trails and public lands-loving millennials “who would have the same reverence for this place that we do. This campaign coincides with the air service that we have an obligation to fill,” he says. That air marketing campaign began in April and will run through August.

Sandstrom says 2021/2022 was the best winter air performance in years for the GUC. This previous winter GUC bucked the historic trend that when airline capacity increased, load factors tanked, which had happened in the early 1990s and again in 2007/08.

TAPP’s executive director John Norton described the healthy winter uptick of both capacity and load factors in a quarterly review to Gunnison County commissioners this week. Norton said metrics show that marketing did help, with a 200% increase on airline clicks from the TAPP website, for example.

“One shift this summer is we are looking at a little bit more of a long game for content distribution. We’re aimed at keeping our brand top of mind for potential businesses, and potential students,” said Sandstrom. “We have shifted a fair bit of the marketing to be longer term campaigns as opposed to being focused on conversion [or immediate visitors] this summer.”

TAPP did a large buy with FreeHub promoting the Crested-Butte based documentary Born From Junk, the Outlaw Origins of Mountain Biking. “Also, we did a buy with Matchstick Productions where the videos created this summer will also drive future campaigns,” says Sandstrom.

TAPP’s website landing pages include calls to book flights or lodging, and also have a call to action to give back to the local trails organizations. “We continue to create and spread content on stewardship,” says Sandstrom.

TAPP has been pushing out a video about the Sustainable Tourism and Outdoor Recreation (STOR) committee, “And we hope to garner more support for the Gunnison Stewardship Fund through the National Forest Foundation. We are working with the STOR committee to create blog posts that will raise awareness of the stewardship organizations and work being done in the valley. This content is continuing to be pushed out to our potential visitors. In addition, we will be creating four videos that highlight Gunnison Trails, Crested Butte Mountain Bike Association (CBMBA), CB Land Trust and the Gunnison Public Lands Initiative. This will bolster the stewardship side of our website to lift the profile of those that are doing the work to steward our public lands. The whole goal of this is to attract visitors that have similar values to the community.”

TAPP is also going for the booming industry of gravel biking that has been going strong for a few years. “We’re leaning into gravel,” said Sandstrom. “We know we have a great product, and we’re trying to better understand it.” He described the phenomenon that converts both urban road bikers and mellowing mountain bikers alike in addition to those being introduced to the sport. Norton acknowledged that TAPP could have been in on the movement about three years ago but is trying to catch up now.

County commissioner chairperson Jonathan Houck chimed in that 37% of the state’s National Forest roads are in Gunnison County, “So we know we have the product.”

Houck added that the resource is already developed, as opposed to trails that need maintenance or new builds.

Commissioner Roland Mason pointed out the additional need to work with negative press around Blue Mesa Reservoir. There have been issues with “Blue Mesa is closed” messages, he said, when in fact the reservoir and restaurants are not all necessarily closed even during low water or algae blooms. Norton said TAPP is working on that as well.

Commissioner Liz Smith asked about the former CBG/TrailQuest app that went defunct about one year ago and said it would be nice to integrate that information into a new app to navigate local trail systems.

Sandstrom said most people are using the Trailforks app now, but the mapping had been preserved.

“All that data that we were able to compile still exists,” he said. “We are doing our best to share that.”

Sandstrom said TAPP is in general open to new potential. “We are always looking for what next thing will be appealing.”

Share
Previous School’s out for Stephanie Niemi:
Next Feast upon the end of the local season