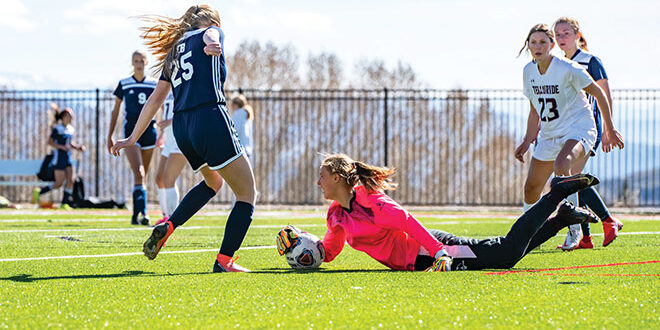 The Crested Butte Titans girl’s soccer team wrapped up the regular season winning two of their last three games and are seeded 10th heading into the 2A state tournament.

The final stretch to the season started off on Tuesday, May 3 when the Titans hosted the Del Norte Tigers. There was little question as to how the game would play out as the Titans cruised to a 11-1 win over Del Norte earlier in the season and they did it once again on Tuesday taking down Del Norte 10-0. Maddie Bogard and Ellie O’Neal each recorded hat tricks while Leigh Harpel scored two and Campbell Ryan and Sophia Righeto tallied one goal each.

Crested Butte had their biggest challenge of the final week of the regular season two days later when they hosted the Telluride Miners on Thursday, May 5. When the two teams met earlier in the season, the Miners rolled to a 5-0 win, but the Titans were missing a few key components in that first showdown and were looking to exact revenge in their second meeting.

“We had a couple players out with injuries in that first game,” says coach Heather Culley.

The Titans got an open look early on when Telluride’s goalie was caught way off her line, but Crested Butte failed to find the open net. Two minutes later Telluride had a series of shots in close, but Titan keeper Mara Pennie came up with three big saves in a row to keep the game knotted 0-0.

While Crested Butte focused on establishing possession, the Miners used their speed up top to break the seal on the Titans as a big punt from the Miners’ goalie bounced over and through Crested Butte’s back line and one of Telluride’s speedy strikers seized on the open look for a 1-0 Telluride lead.

The Titans showed little sense of panic though and continued to stay with their game plan. Meanwhile, their back line of Sawyer Ezzell, Cassidy Wirsing, Harper Andrews and Paloma Lamar shut off the Miners’ speed up top with better positioning and tracking punts better.

“Our middle defense started communicating better and Cassidy pushed up to start winning balls out of the air,” says Culley.

Unfortunately, Bogard had to leave the game with an injury in the 18th minute leaving the Titans without one of the biggest threats and top goal scorers up top.

“That was pretty big,” says Culley. “We definitely missed not having her.”

O’Neal and Morgan Feltus started to find seams in the offensive third though to work the ball wide and cross it into the box for the Titans’ strikers, but the final scoring touch continued to elude Crested Butte.

Telluride struck again in the 21st minute but Crested Butte answered back three minutes later when Harpel converted on a direct kick from 20 yards out to pull back within one.

Telluride kept pushing though with a speed edge on Crested Butte and their effort paid off once more in the first half as they scored in the 37th minute to take a 3-1 lead into halftime.

“I didn’t think we were playing that bad and even after they scored that first goal, I thought we were still in control of the game,” says Culley. “We were all still in a good head space at halftime.”

Crested Butte struggled to establish their possession style game in the second half as long balls were easily collected by the Telluride team for them to turn back on attack. Telluride then scored again in the 58th minute and continued to handcuff the Titans to close out the 4-1 win.

“We couldn’t play our game,” says Culley. “We couldn’t use the midfield to get the ball forward and do anything with it.”

On a positive note, Culley believes the game further illuminated the team to the fact that possession is the key to success for them.

“We stopped playing it out of the back from Mara and the girls noticed that,” says Culley. “They saw things like that throughout the game that they need for the post season.”

The Titans finished the three-game stretch cruising to a 10-0 win over Ignacio on Saturday, May 7 and have this week to fine-tune aspects of their game as they open the 2A state tournament against Buena Vista on Friday, May 13 at 2 p.m. at Fountain Valley High School in Colorado Springs. The Titans defeated Buena Vista 3-0 during the regular season.

“I know everyone is pretty excited about getting Buena Vista in the first round,” says Culley.

A win there sends them to the quarterfinals on Saturday, May 14 at 1 p.m. to most likely face the second seeded Fountain Valley Danes.

“I think we’ll be okay,” says Culley. “We have girls on the bench that can come into the game and maintain the pace of our game and how we play.” 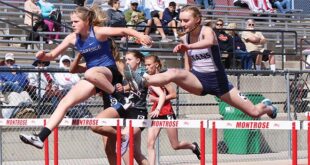