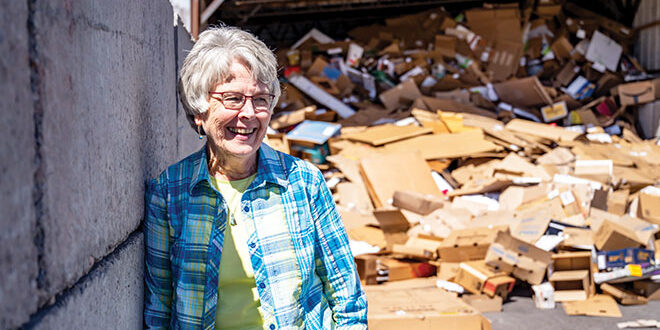 “It’s all about building relationships”

Marlene Crosby has calibrated the exact time of year to begin her retirement with the characteristic attention to detail and consideration for others that has defined her career as Gunnison County public works director and deputy county manager.

“For one thing, I love summer,” she admits. But there’s more to her official end date in June than the draw of the Gunnison Valley during those short, sweet summer months. Crosby wanted to make sure, considering it many months in advance, that her major projects with the county would be in a good position for handing off. She wanted to make sure her crew was prepared. And last, she wanted to transition into having more free time alongside her husband Don during summer when he is busy with various volunteer activities, so they don’t both end up feeling bored.

“It’s going to be a huge lifestyle change for me and probably also for my husband,” she says. But she seems to enjoy a challenge. She says the challenge of learning new things is what kept her with the county for the past 37 years.

Crosby was born and raised in Gunnison and attended Western Colorado University. Her parents had moved to Gunnison from Wichita, Kansas in the 1940s, for the dry climate which helped her father’s asthma. And although her father passed away when she was young, Crosby’s mother had stayed on with her two daughters.

“I’ve worked since I was 14 years old,” muses Crosby. “When you are one of two children to a widow, you learn quickly to earn your own spending money.”

Crosby left for a few years to live in Madrid, Spain with her first husband, which she says was “a very fun time of my life,” traveling around Europe. Then she left again to teach third grade in Leadville for two years, a job which she cherished. Aside from those years away she has spent her life in the Gunnison Valley, and plans to stick around now, aside from maybe traveling during the windy early months of spring or taking her granddaughters along to revisit Spain.

“I like the winters here,” she says. In the summer, she looks forward to tending her flower gardens, adventuring a bit with Don and enjoying their cabin along Cebolla Creek. “There are just a lot of things we want to explore,” she says.

At home she may even take sewing back up, and she recalls how she used to make clothes and special dresses for the kids and grandkids. She and Don might get a puppy too, having said goodbye to their West Highland Terrier this spring.

Then there is her extensive community involvement, including her dedication to the residents at Willows Gunnison assisted living facility, where before COVID she and Don visited often. “I really love those people…so we’ll go back to sing-alongs with them and holiday activities. I’m looking forward to having that time again.”

Crosby places a high value on relationships and brought that to the county from the beginning. She fostered relationships as she became a crew supervisor to a group of men, attended conventions with all or mostly men and stood out as a leader and a worker’s advocate in a male dominated industry.

“I’ve always worked with the local newspapers and the local contractors,” she says, recognizing the importance of communicating to the public and having ties to the local workforce. “In some rural areas there is huge animosity between the contracting community and road and bridge, competing sometimes. So I work very hard to make sure that what the contractors do well we let them do; what we do well, we do. And I always give them a fair chance at any of our projects…we can’t give a local preference, but we try to and make sure we treat them with the respect they deserve.”

With media, Crosby remembers a headline of the Crested Butte Chronicle and Pilot that teased her a little. She had advised commissioners that she didn’t think their decision to chip seal Brush Creek Road toward Skyland was a good idea, but agreed to take it on when they persisted. “The headline was ‘Chip and squeal,’ and I thought, okay lesson learned,” she laughs. “Make your point, but don’t whine.”

She says she hasn’t seen many bad decisions. “Most of all, I want my staff to see and hear how valuable they are. Having dedicated employees who want to do the best they can every day for the public, it’s what makes this department work.”

That spirit of collaborating translates at home, too.

“Don is an integral part of me being successful in this position, because when someone works the hours and the schedule that it takes, you’d better have someone who is supportive at home. He is that person. And he’s the person who spends New Year’s Eve with me on the banks of the Gunnison River watching for the ice flow from Taylor to go by,” she says.

She married Don in 1980, having returned from Leadville to care for her mother and started working locally at an equipment dealership. The economy was in a recession and many farmers were cutting back, so the dealership closed. Don had come to teach at Western in industrial arts, and his expertise was instrumental to Crosby as she took a job with the county in 1985 as administrative assistant for Road and Bridge.

“He has the construction and the design skills, and he has really been an asset to this department,” she says on a personal basis. She relied on his help in designing the county’s recycling center, cold storage facility and landfill gatekeeper’s office.

Over the years Crosby has integrated many departments and projects into the county. “When I started it was just fleet and then road and bridge. Then we took over the landfill, and later we opened the recycling program,” says Crosby. In 1995 they added utilities, moving from one part-time operator at the water treatment plant to two full-time employees “and a lot of different systems.”

She has enjoyed growing along with the department. “There’s enough variety that it’s a continually challenging job,” she says.

Crosby has worked for four county managers and 17 county commissioners—but she will say that’s a low number and an indicator of stability. She has helped usher in major projects like paving Cottonwood Pass, rebuilding Slate River Road, rebuilding and paving County Road 3 in Marble, adding a recycling center, building a new Public Works shop, creating the Gold Basin Industrial Park and building the Gunnison Whitewater Park.

“But I think the most environmentally impactful project was the extension of the North Gunnison sewer system,” she says. While not a flashy move with ribbon cutting fanfare, she says removing so many septic systems from the city of Gunnison’s wellhead recharge area was a major win for water quality. Managing projects like these, with funding from various public and private sources, is her expertise. “This work crosses a lot of jurisdictional lines.”

Another highlight of Crosby’s career was taking the former dumping grounds around Hartman Rocks, where “people used to throw their old appliances and shoot guns,” and creating a beloved recreational attraction. She summarizes, “If you keep it nice people take care of it.”

Crosby has also gotten an ever-wider lens of how much goes into the various aspects of the county’s work. She has served twice as interim county manager and served as assistant county manager for 15 years now. She believes the growth has been smart. “We’ve addressed the needs to meet the demand of the public,” she says. “But I’ve structured it like a business—we can only do what we can do and be successful. I think the growth of our department has been that way, but I think it reflects the growth of our community and the demand of our community.”

For example, she has lately tasked herself with going back through paper records to collect histories of the county’s claims to set up her successors for success.

“The ranchers were and still are very self-sufficient,” she explains of how handshakes sufficed to provide school bus access or better maintenance services. But now without the proper deeds, documentation matters.

Her biggest challenge, she says, has been the budget. While Crosby has masterminded a road and bridge coffer funded primarily by a highway user’s tax, county commissioners have indicated to her in recent months that they might ask taxpayers to help fund the roadways of the county to ensure adequate care for the legacy she is leaving.

The work ethic and culture of community she has created will be another legacy.

Crosby was named the road supervisor of the year in the 1990s by Colorado Counties’ Association of Road Supervisors and Engineers. Colorado Counties also gave her their Elaine Spencer award for her service to the community and organization in 2018, and in 2020 she was named in the top 10 nationwide public works leaders of the year by the American Public Works Association. She says when she announced her retirement to her crew at her department holiday party in December, she looked around the room and realized every single person there was someone she had personally hired.

“Everyone else had at that point retired,” she quips, but another way to look at it might be that she has hand-picked and carefully trained the future of public works, and the future looks bright.

Crosby will be honored by the county in a retirement celebration on May 18 at the Gunnison County Fairgrounds from 4 to 6 p.m.