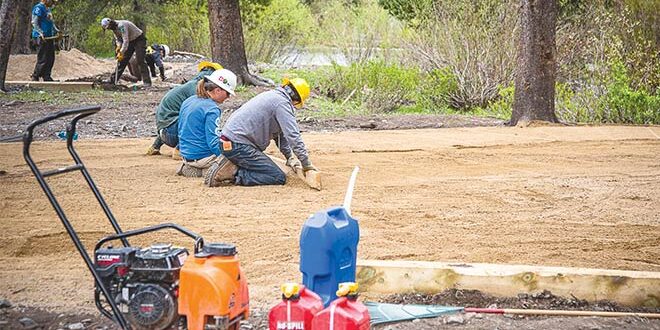 It’s a new world for campers in the Gunnison National Forest this summer as all formerly dispersed camping in the six major drainages surrounding Crested Butte have now moved to designated camping only. But it’s a more sustainable one, too, as increasing visitation, overuse and resource damage led to the two-year effort through a partnership between the Crested Butte Conservation Corps (CBCC), the Gunnison County Sustainable Tourism and Outdoor Recreation (STOR) committee, the U.S. Forest Service’s Grand Mesa Uncompahgre and Gunnison District (GMUG) and funding by the National Forest Foundation (NFF).

More changes are yet to come as Lake Irwin campground prepares for a renovation next year and some newly designated sites will likely move to reservation systems in the future. But overall, with some advance preparation and willingness to adapt, locals and visitors alike can expect a more straightforward experience and this summer the newly updated campgrounds are available on a first come, first served basis.

Beginning in 2020 the CBCC crews have worked on the ground to transition the formerly dispersed camping along the Slate River, Washington Gulch, Gothic Valley, Kebler Pass, Brush Creek and Cement Creek to more sustainable designated campgrounds.

They decommissioned areas damaged by overuse or that were too close to water. In their place they created 228 individual designated campsites complete with sign posts, designated parking spaces and metal fire rings.

STOR Corps, a field crew that the STOR Committee started in 2020, has been responsible for monitoring the new campsites and making contact with visitors to educate and inform them about the new way of camping in local drainages. The STOR Corps made rounds on the weekends for the past two summers, particularly during peak times to talk with people and get their input.

According to Joe Lavorini, who is both stewardship coordinator for Gunnison County and program manager for the NFF, most people appreciate how much more straightforward the new system is.

“Not only are we protecting the resource here, but we’re protecting the experience,” says Lavorini. “People go to the end of the road and they don’t want to be surrounded with trash and degraded resources; they want a wilderness experience.”

Other areas such as Chaffee County are taking a closer look at the future of their dispersed camping, and Pike National Forest’s South Platte district has moved to designated camping only as well. The STOR Corps have been hosting officials from neighboring counties and forest districts for site visits to share the success of the STOR model.

“There are so many use types on the GMUG. Forestry projects, habitat projects, grazing, there’s just a lot going on. That goes for our little corner here, but as we zoom out, there’s never been this much funding and support and attention on what’s happening on our public lands,” says Lavorini.

The STOR Corps will be back out there again this summer from late May through mid-September. Lavorini summarizes that the corps will focus on trail maintenance, outreach and monitoring campsites, while adding in some wildlife habitat improvement projects, fencing projects, “and a little bit of everything.”

There is one area with reservations available in the Crested Butte area: Oh Be Joyful Campground (managed by the Bureau of Land Management) has 30 camp sites that can be reserved from May 28 on. Those reservations go fast once they are released on May 13, so check the website for availability at www.recreation.gov.

“All campsites are now designated across Slate River, Washington Gulch, Kebler Pass, Brush Creek, Cement Creek and Gothic,” explains Nick Catmur, former operations manager for the Crested Butte Mountain Bike Association and CBCC. “Roadside ‘car’ camping is only allowed in these sites for the entire extent of each drainage until it terminates or transitions to a different Forest Service district. If someone is camping in an area without a site post and a fire ring they are camped illegally and subject to a citation,” he says.

Kimberlee Phillips, GMUG public affairs officer, says busy is the new normal and some areas such as Lake Irwin campgrounds have seen a 300% increase in visitors in recent years.

“We are expecting the 2022 season to be about the same,” says Phillips. “We do not anticipate a quieter season.”

As always, practice Leave No Trace principles, and protect your site and food from attracting bears. If fires are allowed, make sure they are contained within a pre-constructed metal fire ring, attended at all times and extinguished completely with no smoldering or active coals before leaving. Daily fire danger ratings can be found at the entrance to the town of Crested Butte and at https://www.fs.usda.gov

To dispose of trash there will be two 96-gallon recycling totes at the Four-way Stop in Crested Butte, sponsored by the Crested Butte Chamber of Commerce. The totes will be located in the wooden enclosure by the Visitor Center’s back door.

“Chamber staff will manage these bins to be sure the recycling is clean and non-recyclables and trash is removed,” says Scott Clarkson, the chamber’s executive director. All the same, be sure to sort your own trash from all recyclables so the service can continue in the future. The town will be providing a dumpster for campers’ use at the southeast corner of the parking lot as well.