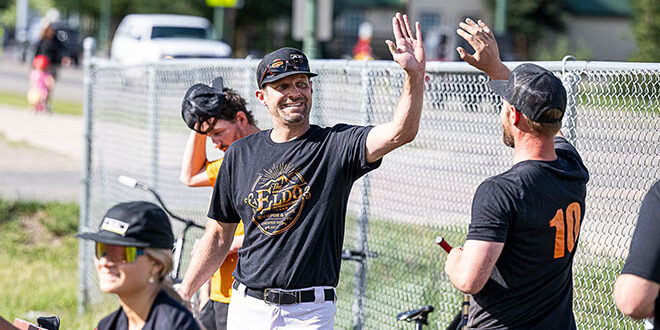 It’s a new world out there, and here

Slowly but surely, Patrick Cashion and the Eldo have been building their softball war chest and it was on full display Tuesday night at Gothic field as they crushed Psycho Rocks 32-13. In fact, the Eldo is even causing a little chatter throughout the league sitting in second place with a record of 6-2 heading into Tuesday’s game, including a win over the defending champions Elevate.

As for Psycho Rocks, well they are a mere shadow of themselves. After spending years as a perennial title contender, the off-season left them depleted losing four key players to moves of some sort. As a result, player/manager Will Mixon scrambled to find players to keep hope alive, and hope is still alive, it just may take a while. But there is hope, I even saw a little of it Tuesday night. So yes, I’m saying there’s a chance. Just not this year.

The Eldo show was on full display as early as the top of the first inning when they ran up an 8-0 lead spraying the field with base hits. Such a spectacle in fact that it drew the attention of a couple of wookies who rolled up to the field in their camper and proceeded to take a seat up on top of said camper with any semblance of jam band music playing from their speakers. Tea Leaf Green? Maybe. Umphrey’s McGee? Probably. Phish, most definitely.

Ashley Hues led off with a single, Mark Krause and Kristen Tyson followed with two more singles to drive in a run and then Brian Carney cleared the bases with a three-run home run off the town hall roof. The lower roof, but still, the clang of the ball hitting the metal is always a special sound.

Cashion added in a solo Inside the Park Home Run (ITPHR), Andrew Arnold and Ashley Jackson tapped two more base hits and then Pip Bailey and Savannah Freeman combined to drive in three more Eldo runs.

But a big lead so early in the game is never safe, except this one was, because the Eldo wasn’t done as they went on to score six more runs in the top of the second inning for a 14-0 lead.

The effort of Dakota Wiggins and Jason Keener resulted in Psycho Rocks’ first run of the game in the bottom of the second inning, but the Eldo was still far from done.

Hues and Krause led off once again with base hits and then Tyson pushed both home with an error-assisted double. Carney and Robin Yost pushed two more runs in with base hits and while Mixon and company managed to stem the tide with a double play, the Eldo wasn’t quite done as Andrew Arnold connected for a two-run, infield ITPHR to pull ahead 20-1.

Yet, as I mentioned, there’s hope and Psycho Rocks showed some promise at the plate in the bottom of the third inning. Not promise for winning the game, that was already out of reach. But promise for greener pastures ahead.

Rosa Greeley and Ali Lieberman each knocked base hits and scored when Ben Hayes smacked a double and Dayna Regan tapped a two RBI sacrifice hit and Wiggins capped the brief stint of magic with a solo shot.

Further proving that the Eldo might be more than just hype though, they responded scoring five more runs in the top of the fourth inning, including a grand slam by Krause, for a 25-5 lead.

Psycho Rocks wasn’t done either. They stopped throwing the ball randomly on defense, for the most part, and continued to find some success at the plate. Wiggins remained in the zone to knock his second home run of the game followed by a powerbunt single by Leah Culkar and a two-run shot from Keener.

But before they could get too excited, the Eldo decided to score a few more runs for a 30-10 lead midway through the sixth inning.

Psycho Rocks did keep scoring though, just way too little and far too late. Kyle Pendleton and Greeley connected for one run, Mixon flexed a little for a solo shot and they ended the game on a high note when McKinley Lenker smacked a RBI double to left field in the bottom of the seventh inning before the Eldo turned the final out of the game for the 32-13 win.