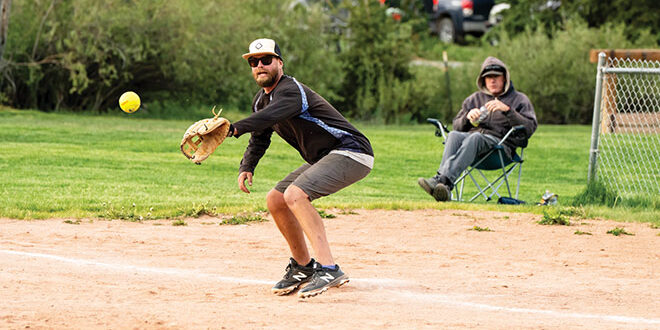 The more things change, the…

So, the latest addition to the local softball leagues went with the name Pork Missile. And while the name may be somewhat upsetting to someone, I’m sure, rest in the fact that it conjures up the days of old in the local softball leagues as the Kochevar’s team “back in the day” was named the Trouser Snakes. I’ve said it many times before and I will say it again, Huey Lewis was right. The more things change, the more they stay the same.

And while according to the recent scores and standings on the Crested Butte Parks and Recreation website, Pork Missile has won a game, they did not Wednesday night as CB Extreme handed Pork Missile a 23-2 kick in the crotch. Maybe even more but, truth be told, I may have missed a few runs as CB Extreme had the Avs game streaming live on their bench, so I was a bit distracted.

It started with Rhett Yarbrough, Jess Forbes and Drew Stichter combining for three base hits to generate two runs in the top of the first inning.

Pork Missile’s defense seemed solid enough to hold off any additional runs the next inning, but CB Extreme rallied for five more runs in the top of the third inning. Molly Susla, the very week of her impending nuptials, led off with a base hit turned double thanks to her Nordic skiing engine. Hannah Valian drove Susla home with a single, Forbes struck again with her second RBI base hit in as many at-bats, Stichter followed suit and then Sean Slattery capped it off with a two RBI triple to build a 7-0 lead over Pork Missile.

Pork Missile showed signs of life in the bottom of the third inning as team captain and one of three Jordans on the team, Jordan Erdie, led off with a single. Ethan Johnson doubled to deep centerfield and Emily Haugbro singled to load the bases with no outs. But Pork Missile’s bats fell surprisingly silent as the next two Pork Missile batters hit into a double play and grounded out leaving Pork Missile without a single Pork Missile run.

BRhETT Hubert tacked on another CB Extreme run with a double to left and they were set up to add more to their total, but Pork Missile second basewoman Courtney Grivas flagged down a line drive to stop CB Extreme in their tracks.

Grivas’ effort on defense helped spark a little Pork Missile magic on offense in the bottom of the fourth inning. Jordan “like the gate” Brandenburg got things going with a double to right field. Jordyn Johnson followed with a single and Curtis Beuthler pushed Brandenburg home with a single. Erdie walked to load the bases, but the Pork Missile surge was almost immediately shut down as Slattery chased down a liner to the gap in left center for the grab leaving three more Pork Missile’s unable to reach home.

CB Extreme tacked on four more runs before Grivas had another highlight grab at second base for Pork Missile. Pork Missile managed to score one more run thanks to hits from Chris Leavitt and Sam Kay but that would be the end of it as CB Extreme rattled off eight more runs in the top of the sixth. It was a who’s who of hitters for CB Extreme as everyone got in on the Pork Missile pummeling to build a 20-2 lead midway through the sixth inning.

CB Extreme tacked on three more runs in the top of the seventh inning to put the finishing touches on the 23-2 Pork Missile beating.