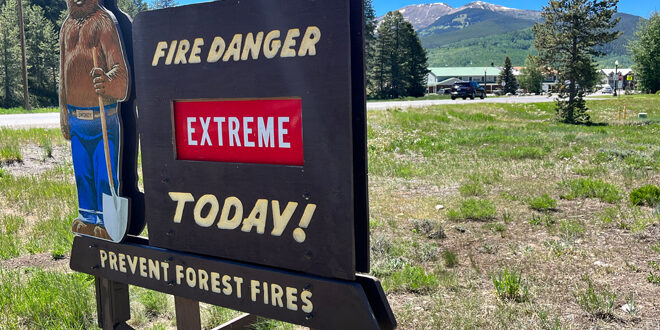 Coordinating with BLM and Forest Service

The warm weather, high winds and persistent drought conditions have tipped the scales for Gunnison County to join with most other surrounding counties on the Western Slope in issuing fire restrictions this week. The Gunnison County Sheriff has issued a Stage 1 fire restriction order for all of Gunnison County starting on Wednesday, June 15, and the Bureau of Land Management (BLM) and the U.S. Forest Service did the same in coordination with one another as members of the Gunnison Basin Wildfire Council.

Stage 1 fire restrictions mean fires are allowed in permanently constructed devices on private property and in developed recreational sites such as campgrounds or picnic areas. Fires not contained in permanently constructed devices are prohibited, and fires in portable devices such as tiki torches or fire pits are allowed only on private property. Personal fireworks are prohibited, as are explosive targets and agricultural burns. A full list of restrictions can be found at gunnisoncounty.org/852/Wildfire-Information.

The press release described the process used to determine fire restrictions, which include federal guidelines using the National Fire Danger Rating System. “If the Energy Release Component (ERC) and Burning Index (BI) fire indices reach the 90th percentile in the Gunnison Basin, then a meeting with the Gunnison Basin Wildfire Council must be convened to discuss restrictions.”

The BLM and USFS collect the data used in these guidelines, and as of 10 a.m., June 13, the ERC and BI exceeded 90%. A Gunnison Basin Wildfire Council meeting was convened the next day to discuss conditions and the possibility of fire restrictions.

“We’ve been watching this closely and those meetings started about three weeks ago,” said Gunnison County emergency management director Scott Morrill of the determination process. “A lot of criteria and data go into these restrictions, and the conditions finally deteriorated enough that fire restrictions were necessary,” he said. “And really there’s no relief in sight.”

Morrill was referring to the current weather forecasts, which as of Tuesday afternoon called for a cool front approaching at the week’s end but no meaningful precipitation and possible dry lightning. “A couple of spring storms have given us relief when we really needed it until now,” said Morrill.

The decision for the County to move in or out of fire restrictions is then based on the following criteria and summary of current conditions:

1) Is local resource availability reduced where a significant fire would be difficult to staff adequately?

Summary: Recent fire starts in Conejos, Teller, Montrose and La Plata Counties, as well as those in New Mexico, are drawing local, state and federal resources out of Gunnison County. The National Preparedness Level is 2, Regional is 2, and locally is 4 (level 1 indicates the most preparedness, while Level 5 indicates the least preparedness).

2) Consider whether local area human caused occurrences are predicted to continue or is risk expected to increase.

Summary: Human starts continue to increase, as well as numerous unattended campfires being found. The Fourth of July weekend is expected to bring many more campers/hikers to the area.

3) Consider if weather patterns and potential risk are predicted to continue. Are conditions going to change or remain constant?

4) Are federal partners, such as the BLM Gunnison Field Office and the Gunnison National Forest, going into restrictions?

A combination of the fire indices and discussion on the above criteria at the Gunnison Basin Wildfire Council led the Council to recommend Stage 1 Restrictions for all of Gunnison County, and Gallowich signed off.