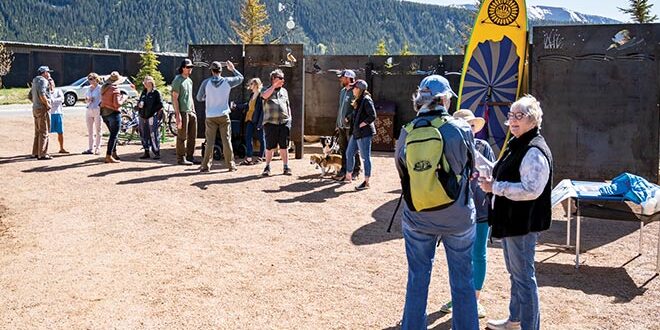 New Slate River boat launch up and running for public use

Spreading out the impacts of more use in a small space

Crested Butte’s new Slate River boat launch is now open and the hope is to get people that start floating the Slate River from town to do so at the new spot near the Aperture subdivision.

Historically, people have put their rafts and stand-up paddle boards (SUPS) in at the Rec Path bridge in the Paradise Park subdivision. But because of the increasingly overcrowded area, the town developed a whole new put-in upstream of that spot, off of Pyramid Avenue, that officially opened last week. Most people then take-out at the bridge located at the entrance to Brush Creek Road.

The $306,000 project provides a dedicated launch area with changing facilities, a staging area and a portable toilet. Access to the river using a boat slide and stone slab steps have also been constructed. Kayak and paddle board racks for temporary storage will provide out-of-the-way space for leaving equipment during shuttle runs. Educational information on how to use the river and respect nearby private property will be located at the launch.

Crested Butte Parks, Recreation, Open Space & Trails director Janna Hansen explained that the place most people use to access the Slate right now is simply seeing too much use. “The Rec Path provides pedestrian and bicycle access north to Mt. Crested Butte and south to the Skyland subdivision, and links hundreds of miles of trails to the Town,” she said. “The Rec Path is the most heavily utilized trail in the valley as most bikers leaving from town start and end their rides on the Rec Path. The Rec Path Bridge is encompassed by private property that is designated as open space through a conservation covenant. The conservation covenant provides public river access along the eastern bank of the Slate River. However, most river users currently access the river from the private property on the western bank which has caused conflict with both the landowners and cattle grazers.”

She said the high intensity of use at the Rec Path Bridge has also caused significant degradation to the riparian area, adjacent wetlands, and wildlife habitat at that site. As such, the town is also improving the eastern bank of the river through stream bank stabilization, wetland restoration and a gravel access path to better handle the impacts throughout the site.

“Our community and the state of Colorado are at a crux between recreation and conservation. I am really proud of the marriage between the two that this project affords,” said Hansen. “This $300,000 project should get underway this summer and qualifies for the town’s Art in Public Places policy showcasing hand-drawn herons created by artist Mary Tuck that are laser cut into steel panels of the changing rooms.”

Hansen reiterated that the adjacent affordable housing neighborhood has been vocal in numerous public meetings about the negative impacts they are facing due to the multiple uses concentrated in this small residential area. This high-density residential part of town was not designed as a trailhead nor boat launch but has been used as such increasingly over the past few years.

“Overall, the hope is that by implementing better management, education and a reduction in concentrated high-volume use, it will be more sustainable for everyone,” said Hansen. “The new boat launch is beautiful and built specifically for that purpose, so we are asking that from now on people use that site for floater access instead of the Rec Path bridge.”

The boat launch project was paid for by the town of Crested Butte and the Gunnison County Met Rec District.