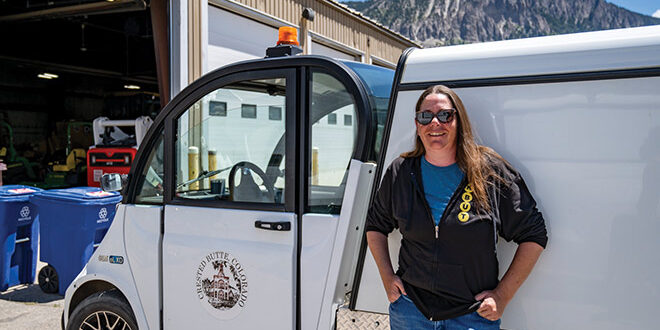 Sarah Hume likes to keep it simple. Simply, she enjoys life. A Colorado-born girl who arrived in Gunnison at the ripe age of three months, she rightly considers herself a native of the valley, she says and smiles, “Plus it gives me credibility. I went to Lake, O’Leary, and Blackstock School in Gunnison. I was one of those who got to attend all three schools. My maternal grandmother was a teacher at Blackstock.”

As a child, Sarah did all the usual things that kids in the Gunnison Valley did. “We’d go sledding and I loved to ice skate,” and she’d play in snow and frigid cold. During the summers she recalls, “Growing up in Antelope Hills there wasn’t any light pollution, so I saw a lot of gorgeous meteor showers. We’d camp out in the front yard and watch the stars fall. I also took dance lessons from kindergarten through sixth grade.”

Through her high school years, Sarah confesses she didn’t go to class much. “I was one of those people who could be lost in a crowd easily. I could go to class for attendance and then leave.” However, she reiterates, “My aspirations were really just to have a good time. I spent a lot of time at Hartman Rocks having bonfires and drinking. We didn’t drink and drive, we always camped out.” She did excel in learning German though and was able to save enough to go to Germany for two weeks in her junior year, in the spring of 1996.

Sarah graduated in 1997 and, like many setting out on their life’s path, had no idea what she wanted to do. “I’ve always wanted to just survive and experience life.” When her best friend moved to Punxsutawney, Pennsylvania, Sarah decided to try life outside of her hometown and live with her friend’s family. “It was my first attempt to leave the Gunnison Valley. And I missed home,” she smiles. She lasted two months before returning to Gunnison and began working as a housekeeper for Bill Babbitt and Jeff Shipley at their High Country Resorts.

In 2000, Sarah moved to Crested Butte where she enjoyed employee housing in Mountain Sunrise for two years. “I was given the title of Village Center Queen by Virginia Roarke because I could clean three to four condos a day and do the additional condo services like towels and trash for the Snowcrest, Axtel and Emmons buildings. That was the late ‘90s. I was averaging $22 an hour,“ she tells, which was quite a decent pay for the times, so she stayed on for six years.

Once again Sarah decided to try life outside the valley and moved to Denver in 2002. “But Denver ate me and spit me out,” she laughs about her short one-month stint. She returned home to start her own cleaning business. Based on her reputation and word of mouth referrals, her business flourished and her accounts were mostly large mountain homes. She also wound up working as cleaning management for a few small companies.

In 2007, Sarah took a launderist position, working for two years at the Gunnison Nursing Home. “Pretty interesting job, just to get to know the residents and listen to their stories. I got to meet new people and sometimes I got to meet the same people every day as their new friend,” because of their dementia, she says.

For some reason she still can’t figure out, Sarah decided to attend Western State College (now Western Colorado University) for English, “I have no idea why,” she shrugs. “At the time, I was working at Joe Dixon’s video rental store. We were one of the last video stores,” she tells. “You wouldn’t believe how many out-of-town visitors came in looking for porn because those were the only video stores left. They’d come in looking around at all these Disney videos and then they’d walk out. Every once in a while, one would come up and ask for the adult section and I’d point them to the R section.” She was there four years, through 2011.

She was quite done with both school and customer service, so she went back to what she enjoyed most for work, housekeeping, this time at the Grand Lodge. “It was the worst paying, hardest job I’ve ever had,” but she had taken the job because working for herself was like working seven days a week and essentially having 20 individual bosses, but at the Grand Lodge, it was too little pay for too much work, she thought. The upside was that she ended up with her own cart and floor because they recognized her work ethic. “I’m a damn good cleaner. I was taken care of in a way my managers could. The solitude of working by myself made the day ok.” Despite the tediousness of the job, Sarah stuck with it for six years.

While riding the bus from Gunnison to her job in CB, she was approached by Dale Hoots, a maintenance worker at the Elevation Hotel and later for the Town of CB, who said to Sarah, “I’ve been riding this bus for a week looking for you.” Dale wanted to tell her about the janitorial position opening with the town of Crested Butte. She applied, got the job and is still happily employed there. “I love it,” she says. “I do not have to make beds and I have very few stairs to climb. There are 24 public restrooms in this town, counting men’s and women’s and I clean 22 of them (the Chamber contracts theirs out) and I take care of Town Hall and the Marshal’s Office. Recently, the town has hired someone to clean on weekends, so I don’t have to work weekends anymore. It’s the first time in my life I don’t have to work weekends,” she exclaims gleefully. “It’s incredible! I go fishing. If there’s water, I’ll put a fishing pole in it. I love both fly and cast fishing. I like to fly on the river and cast on reservoirs.”

Right before everything shut down for COVID in 2020, Sarah became a KBUT DJ known as The Hypochondriac and appropriately named her show, “I Got This,” which airs Saturday from 8 to 10 p.m. “I play everything and anything, there is no limit, but I always play at least one Dolly Parton song every show. I only went to one of her shows and it’s the most amazing thing. It’s a lot like this valley, just a huge diversity of people getting along – Republican, Dems, bikers, hippies, everyone. It’s the most incredible thing I’ve ever seen and of course, she’s fantastic. She had a different outfit for every song.”

Sarah says she has learned her lesson about leaving the valley. “I tried to live other places, but I boomerang back within two months. I’ve never lived anywhere else for longer than two months. Even though this town has changed dramatically, this is my home, it’s all I’ve known. It’s a comfort to me. Sure, I’ll visit someplace for a while but to go visit somewhere else and then come home to see the mountains is one of the best feelings I get.” 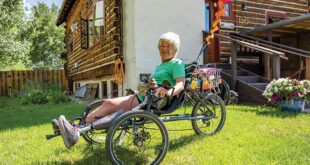