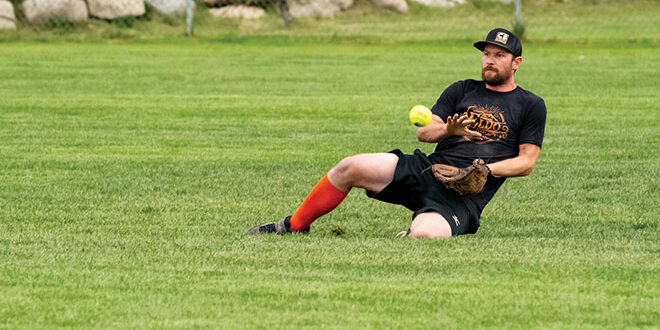 Eldo wins Barmuda Triangle battle over Talk of the Town

Back in the groove?

When I last checked in on the Eldo, they were the hottest team in softball and were the talk of the Tuesday/Thursday league. Since then, they lost four of their last five games of the regular season to end up in fourth place heading into the post season.

Well, concerns of that slide continuing into the playoffs were quickly laid to rest as they cruised to a 16-4 win over the Talk of the Town on Tuesday evening at Pitsker Field.

The Talk of the Town finished the regular season in a similar slump dropping their final four games. But veteran player/manager Dave McGuire had some sage words for the team as they readied for the first game of the 2022 playoffs to assuage them of any potential nerves, “no thinking.”

And, at first, I thought it worked as the Talk of the Town scored three runs in the top of the first inning off hits from Robbie Vandervoort, Garrett McBride and Kelly and Dave McGuire.

Sure, the Eldo came back in the bottom of the first to score two runs, but it could have been more had it not been for the grit of the Talk defense recovering from a couple of early errors to make the needed plays in the field including throwing out an Eldo runner stretching for home.

The Eldo had some defense of their own though and that would be the foundation upon which they would build a sizeable lead over the course of the next two innings.

After holding the Talk scoreless in the top of the second inning, the Eldo bats soon rediscovered the stroke that carried them to early season success.

Mark Krause led off with a single up the middle followed by additional hits by Nick Fullweiler and Kristin Tyson to load the bases with one out. Pip Bailey then flared a “weird area” two RBI double to shallow right field, Ashley Hues crushed a two RBI triple to deep centerfield and Gunnar Cantwell tacked on one more run with a RBI base hit for a 7-3 Eldo lead.

The Eldo defense then held the Talk hitless in the top of the third inning, including a leaping grab by Cantwell (but can catch) at third, and then picked right back up where they left off at the plate to score five more runs.

Brian Carney started things off with an opposite field triple to deep right and scored on a single by Robin Yost. Patrick Cashion picked the same “weird area” as Bailey had done earlier for a double and scored off a double by Savannah Freeman. Krause, Fullweiler and Tyson then loaded the bases with a series of hits and Bailey drove two of them home with a single. It was about to get worse for the Talk of the Town too had it not been for a double play off a line drive to end the inning.

The Talk rarely gets rattled though, no matter what the situation, and looked just about ready for a rally. Dave McGuire led off stretching for a double with some heads-up base running. Michael Johnson then singled and Nate Miers pushed McGuire home with another base hit. But Cantwell proved again that he can catch as he robbed Hollywood of a hit with a shoestring grab and the Eldo defense then retired the next Talk hitter to quash any comeback potential.

Pete Basile provided similar stingy defense for the Talk chasing down fly balls in the outfield but Cashion and Carney each connected for two RBI base hits down the stretch to put the finishing touches at the plate. Meanwhile, the Eldo defense, paired with the shimmy-shake pitching style of Joey Reed, did the rest as they held the Talk of the Town to no hits through the final three innings for the 16-4 win.