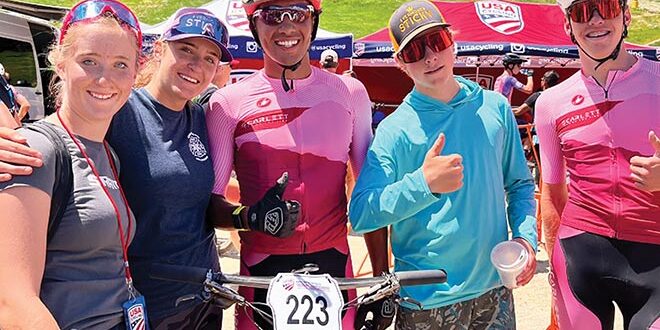 Team Scarlett in the house

A contingent of local riders from both Team Scarlett and the CB Devo team made the trip to Winter Park July 18-24 to compete in the USA Cycling Junior Mountain Bike Nationals. While the podium proved elusive, CB Devo rider Eli Nolan did finish in 20th place in the 15–16-year-old category in his cross-country race and Luca Williford, just 9 years old, placed third in his downhill race and won the dual slalom.

And while their showing at Nationals across the board was admirable, it also continued to fuel the fire for local riders making the push to the bigger picture of mountain bike racing and continued to build energy on the recently formed Team Scarlett bike team.

Team Scarlett was the brainchild of Katie O’Neill, Piper O’Neill and Eliane Fisher. All raced in the fall high school mountain bike league and, in January, decided to take it to another level with the creation of Team Scarlett.

“Women’s sports are typically about fun and participation rather than competitive and we wanted to make women’s sports with a more competitive mindset,” explains Piper. “We hope to change things through Team Scarlett.”

The team’s name has some meaning behind it. While their slogan is Stoke the Fire and was the first choice, they felt it was too long. So, they took a different route.

“It’s a woman’s name which many teams aren’t named after, inclusivity and representation of women in sports,” says Piper. “We recognize that it does sound a little bit like a stripper name, and we wanted to break down the social ideas that women are objects and create an ideal of equality between the genders in sports.”

Piper, Katie and Eliane started the process by reaching out to other athletes from the high school racing scene and they, in turn, reached out to fellow racers across the Western Slope. In their inaugural year, Team Scarlett ended up with 10 athletes committed to the team from Crested Butte, Gunnison, Salida, Montrose and Cedaredge, and not just young women either. Finn Veit, Lance Knutson, Connor Knight and Ethan NeJame Zeiset joined Piper, Katie, Eliane, Nori Veit, Ciana Beller and Hayden Bevington on Team Scarlett.

“It’s coed because we recognize that training and racing with guys will make the girls stronger,” says Piper. “And we’re going for equality in sports.”

As always, the toughest part about any new endeavor is money, but with equipment, fuel and financial support from SRAM, Vermont Sticky, Oveja Negra, Rock Shox, CB Power Yoga, O’Neill Painting, Craftsmen Design Build and Delta Orthopedics they started the season with pro forms for gear and $3,500 in the bank to help cover race registration fees as well as food at race venues.

“It’s hard to run a larger team without a ton of money but we’re doing it,” says Piper. “You can do it if you want to do it.”

“It’s more up to the riders,” says Piper. “I read Intuitive Eating and put together a slide show for the athletes on the importance of sleep, eating and hydration.”

Their focus on health has garnered the attention of a coach in Boulder and the Colorado high school league is interested in Team Scarlett doing a presentation of proper fueling and eating disorders for the league heading into the 2022 fall season.

With a team in place, the riders then were on their own to race whenever and wherever possible. Some of Team Scarlett carried the message to the 12 Hours of Mesa Verde, a race in Missoula, Montana, the Fangdango outside of Denver, the Growler and Junior Bike Week here in Crested Butte. The team’s only requirement among the race season was to make sure everyone made it to Junior Nationals in Winter Park.

“We had a ton of fun but they’re fast at Nationals,” says Piper. “We all did pretty well, and it was good to see the competitiveness we’re striving for. It worked out pretty well in the end.”

Perhaps more importantly, they continued to draw attention to their message as a team, including an interview with Eliane by USA Cycling.

Nori and Eliane will continue to carry the Team Scarlett name and message as they’re headed to college in the fall while the rest of the team will turn to the high school racing circuit this fall. Meanwhile, they have opened Team Scarlett for additional athletes to apply for the 2023 team with the application process on their website as they look to continue the energy from their first year into more races next year.

“We’ll see how big we want to be, and which athletes will fit the code of conduct and fulfill the morals of the team, be inclusive, be optimistic and get stoked,” says Piper. “We want to mix the fun of women’s sports with competitiveness. We’re notorious for being the loudest at races, we want to make that a part of this team. Unconditional support and fun.”

Information, application and a link to their gofundme page can all be found at teamscarlettcycling.com.