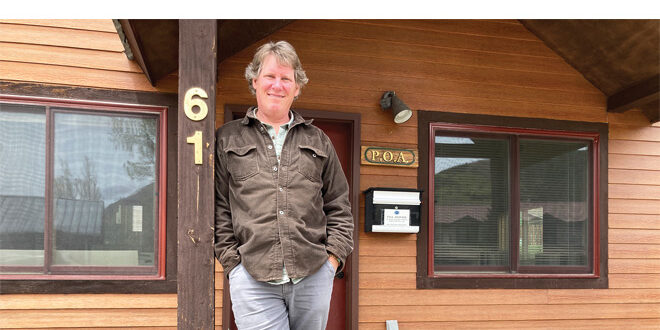 Getting some bearings: an interview with CB South POA’s new manager, Derek Harwell

When the Crested Butte South board of directors announced the search for a new Property Owners Association manager this spring, Derek Harwell says he felt called to bring his experience and positivity to the table.

Harwell has gotten his feet wet since being hired in April and starting as POA manager in May, finishing up his previous work teaching and advising at Western Colorado University and fitting in a previously-planned Grand Canyon rafting trip along the way. He sat down with the Crested Butte News recently to share what he has observed in the few weeks since taking the reins as manager and already running two major votes on a contentious covenant revote controversy, hosting a Red Mountain Parks master plan unveiling and now overseeing the membership’s new covenant revote and board of directors election. And Harwell seems to have an energized perspective to it all.

Derek and his family have lived in the North Valley for five years, settling in CB South near the commercial district which has given him perspective on the intersection of family life, growth and the commercial interests in the area. He was the community engagement coordinator at the Clark Family School of Environment and Sustainability at WCU for three years, and growing up between the San Francisco Bay Area and Atlanta, then attending Middlebury College in Vermont he has seen a range of cultures and lifestyles. He spent 18 years between two different towns in rural California and says, “It’s actually more like an urban setting coming here—we were pretty out there.” He also lived in and worked at small resort communities like West Marin, the San Juan Islands, Yosemite and the Santa Ynez Valley.

Between the diverse and underpopulated places he has lived and his 30 years of experience in education, from preschools to graduate schools, he feels familiar with the need for collaboration, accessibility and transparency in small town circumstances. He said he is getting approached a lot around the community, possibly due to the contention around the covenants vote that was nullified earlier this year and then voted on twice to determine the process and timing of a revote. “I’m trying to have some boundaries,” he said, of not talking shop everywhere he goes. But he is also happy for the engagement. “I’ve always felt my work has to align with my life. I got inspired to get more involved,” he says.

Harwell says he see a few challenges, of course. One is sometimes conflicting perceptions of what CB South has been, is or might become. “There are people who have been here a long time, and others coming in—some as investment property owners but mostly as residents. And many people have different ideas of what should happen here, in the commercial zone, even with our covenants,” he says. “It is something to navigate.”

Harwell says he feels good about joining an entirely new but very competent staff at the POA and working for an engaged POA board and citizenry.

“There’s pretty much an entirely new team here,” he reflects, between the administration, management and parks and recreation department that has turned over in the past year. “There are a lot of fresh eyes seeing where we might go.”

As for where CB South might go, Harwell has gotten a sense of what he has in front of him.

“There’s tons of growth. For a long time, CB South has been kind of a sleepy spot,” but he says the boom of people gives it more of a sense of full-time life. And that certainly includes a relatively booming commercial district and the possibility of residents relying less on the town of Crested Butte or Gunnison for goods and services.

“There’s a lot of value in people not feeling they have to go to town,” he says.  “Gunnison and Crested Butte have a vested interest in Crested Butte South absorbing some of the demand.”

Harwell says he sees the challenges too, though. “There are also community concerns over speeding, traffic issues, parking, bus stops, a potential sheriff’s substation and in general an area that is growing faster than almost anyone can keep up with.”

He is most excited to see about what can be done with the POA-owned parcels, some graduate student collaborations with Western Colorado University for the community garden and developing the parks. “There are lots of possibilities,” he says. And those will need a lot of planning.

“I think we are at a crucial time in CB South to be able to hone in on a vision for the community and be able to truly enact it such that we retain the livable feel for all. We are in the final stages of work on a master plan for the parks, both Red Mountain and Brackenbury, and there have been some incremental steps in the development of the commercial district. We have to remember that while we continue to grow, we still currently have a single bridge in and out and are already experiencing challenges with congestion, traffic flow and parking. As we further develop both the residential and commercial areas in CB South, we are going to need to address the broader infrastructure capacities. This will all need to happen in coordination with larger entities, as we do not have a tax base from which to draw, we operate primarily upon our annual membership dues.”