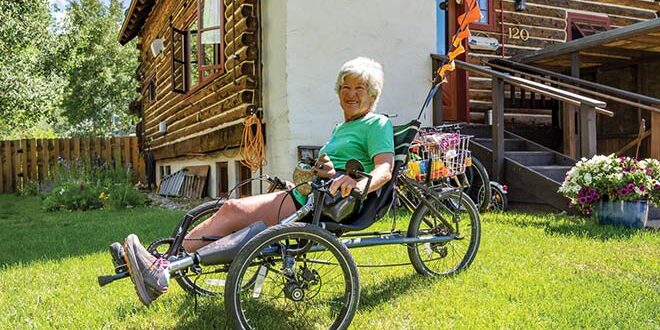 Talie Morrison has been an avid hiker, visiting all seven continents and her love of New Zealand took her back to the land below 13 times. She started her own hiking and backpacking business, Alpine Meadows, to share her vast joy of the outdoors with others, showing them the beauty of Crested Butte, Arizona, Utah and New Zealand. Talie also worked in Antarctica for 14 months from August 2007 through October of 2008, working at McMurdo Station, where winter was very dark for its long entirety. She also joined the Antarctica Search and Rescue where she got to play among the icebergs, watch penguins and visit explorer Captain Robert Falcon Scott’s huts.

In 2017, Talie was diagnosed with cancer, and over the course of a few years, her left leg had to be amputated. Although it has slowed her down, it hasn’t stopped her. This Saturday, she’ll be participating in Living Journeys’ Summit Hike to the top of Crested Butte Mountain, an annual event that raises funds to help and support cancer patients and their families.

Talie started her young life in Cincinnati with two older brothers and she laughs, “I was always trying to keep up with the boys.” Her father was in machine tools and mom was a homemaker. “As a child, I was never really very good in a scholastic ability but I loved playground and sports,” she says. In her all-girl high school she was always on a sports team – softball, field hockey, gymnastics, tennis, volleyball and basketball – I did whatever was offered because that’s where I could excel and be physical.” She graduated in 1964.

Talie met her husband, Richard Dobbins, in her junior year of high school and after graduation her plan was just to get married, which they did in 1966. She had completed a year of college in North Carolina before deciding to return to Cincinnati to get a secretarial degree, which focused on teaching the art of filing, typing, shorthand and running an office, “So I could get a job,” she says, and she did, working at the Dean of Women’s office at the University of North Carolina for three years. She had moved to Carolina to put her husband through law school. It was in Chapel Hill where she had her two sons, Craig and Stephen.

The family then moved to western North Carolina to Spruce Pine, where her husband practiced law and Talie and two other mothers started a Montessori school in 1972 because, she tells, “There wasn’t a school for our children. I was teaching, administrating, and fundraising, doing everything. We started with 18 students and it grew over the years. I sold it to the teachers when I left in 1981 because we moved to Crested Butte.” They’d journey west for ski trips and Talie says, “We fell in love with it.” They had bought a condo at Columbine and decided to be fulltime residents in 1981, “Because why not?” she laughs.  “It was one of the smartest moves I ever did and I’m still glad I’m here.”

She arrived with no real plans but got a job working at the Columbine front desk. Later, she and her hubby, along with partners Joe Fitzpatrick and Vince Rogalski and their wives, started Solutions Property Management Company. “We were six people running the company. My title was owner-services coordinator. It grew by leaps and bounds and when I left in 1989, we had about 300 condos that we managed.”

Talie split with her husband in 1988 and later married fisherman Mike Wilson. The couple moved into a motorhome and headed to Alaska for two years to caretake an upscale fishing lodge out in the bush on the river the Kvichak. “It was very interesting because there was no electricity, and no running water,” she says of their off grid living. “One winter it was really icy and the next winter it was really cold.” Since they were inaccessible in the winter, the owners would stock the food before they closed down the lodge, “You could only fly in if the river was thawed, once it froze, you were pretty isolated until the river broke up in the spring. It was just the two of us and our dog. Because it was a high dollar place, like $7,000 a week to stay there, they had to have someone there to take care of the place otherwise the insurance would become null and void so someone had to be living on site.”

After two winters isolated in Alaska, they headed to New Zealand for the third winter, which was New Zealand’s summer. It was her first trip there. “I wanted to go where it was warm. We went all over, we had a car and tents. I love New Zealand, it’s beautiful,” she says. “But if all the people moved to all the beautiful places in the world they wouldn’t be beautiful anymore.”

They traveled the country for four months and then returned to CB where Talie was hired at Forward Steps. “We took teenagers backpacking. I worked there for two summers from 1992 through 1993.” She and Mike went their separate ways in 1993 and Talie moved to Santa Barbara to be close to her son Craig and her grandson. “I had several jobs there. I was Kenny Loggins’ personal assistant. I also worked at a health food restaurant as a waitress and hostess.” But Santa Barbara was too busy for her. She was turning fifty and she decided to give herself the present of not working for a year and living in her van, “Everywhere and anywhere, wherever I wanted,” she smiles.

In her nomad lifestyle, she traveled around the west between California and Colorado, but she was ready to be back in CB by 1996. In 2002, Talie bought a truck and then a camper in 2018 and for 20 years she didn’t have a physical address, making her home out of her vehicles until June of 2021. “I had cancer in my leg,” which they discovered in 2017 when her femur broke. They reconstructed her femur and afterwards, she went backpacking in Iceland and back to her beloved New Zealand.

In March of 2020, Talie once again returned to New Zealand and got stuck in the COVID lockdown there. She hung out in Dunedin and kept busy walking her friend’s dogs.

When she was finally able to return to the states in July of 2020, to deal with a loose screw in her knee, she moved back into her camper for a year, until the cancer returned in 2021. Her leg had to be amputated midway through the femur in June that year, and later the surgeons had to perform a disc articulation, removing her femur from the hip. “It was really more difficult than I thought it would be but it’s what I’ve got and there’s no sense crying over spilt milk,” she says bravely. Talie was fitted with a prosthetic in January and she’s been going out with Adaptive Sports to train, focused on doing the Summit Hike for Living Journeys.

Last September, Talie moved into an apartment in town, “I need to stay positive, so I do what I can do and be happy with it and I won’t know what I can do until I try it. I can bike up the rec path and I can get around town on my recumbent bike. Living Journeys has been really helpful in my process, they’re a really good support group for people who’ve dealt with cancer. Once a week they do a meal for people living with cancer and deliver it and through Mountain Roots, they bring me a bag of fresh vegetables once a week. It’s a great program so whatever I can do to help them, like the Summit Hike, is important to me. Adaptive is also really supportive. They take me out hiking a couple times a week.”

Talie is a tenacious and determined survivor who is appreciative of her community, and the opportunities and support that Adaptive Sports and Living Journeys bring, “I’m blessed that I live in Crested Butte. I’ve been here 41 years and it still takes my breath away. It’s still the best place on the planet.”