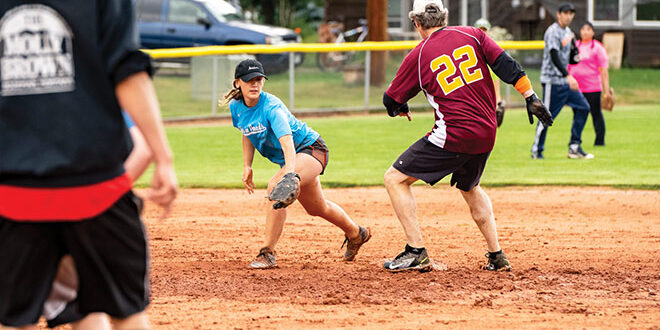 It’s not that a guy just rolled a peanut to the top of Pikes Peak with his nose that really made me stop and wonder. It’s the fact that there were three others before him that did it and that he set a new record by doing it in seven days. Not only that, but he didn’t actually touch nose to nut. Instead, he had an apparatus attached to his head and nose, compete with duct tape repairs, to accomplish the feat.

I did a little rough math and I think the record, physically, would be pretty easy to beat. It’s the psychological part that’s probably the toughest. I’m also going to call a little bull on the use of an apparatus. You gotta put nose to nut to make it count. Nose to nut. But what do I know?

Softball is what I know and the local leagues are headed into the playoffs with Pitas Meatsticks dominating the Tuesday/Thursday league with an undefeated record including a recent 25-14 win over the Hares. Which brings us back to peanuts because the Hares always have peanuts at their games.

“A lot of people don’t realize what’s really going on. They view life as a bunch of unconnected incidents and things. They don’t realize there’s this, like, Lattice of Coincidence that lays on top of everything.”

It was going to be a tough game for the Hares as Pitas are quite the powerhouse, and even more so at Tommy V Field that appears to be vacuous with “a lot of green,” i.e., a lot of room for base hits.

The Hares are no slouches though, a little slouchy, but no slouches, and were prepared for the challenge, at least through the first three innings.

Pitching duties for the Hares were handed to Tom Stenerson and Stenerson opened the game fanning the leadoff hitter for Pitas. A good harbinger for the Hares for sure, but certainly too early in the game to say as Emily Crooks followed with a single and scored on a two-run home run from Drew Stichter. Two more Meatsticks got on base and scored as Emily Ocanas knocked a sacrifice fly RBI and Brian Densmore dropped a bloop RBI single for a 4-0 lead.

The Hares came right back at Pitas as base hits from Lucas “McSomething” McMullen and Bryce Miller stroked base hits to get things going. Downtown Dan Brown, the purest of pull hitters, roped a two RBI double down the leftfield line and Tucker brown’s RBI single had the Hares right there with the Meatsticks.

Defense from both teams then set the tone for the next two innings. Sure, Pitas tacked on three more runs in the top of the second, but Stenerson flagged down a line drive up the middle and Kent Fulton made a sliding grab in center to hold Pitas to just three runs.

The Pitas defense had some highlights as well including Densmore’s Willie Maysesque grab behind first base to deny a “weird area” base hit.

The Hares caught a little fire at the plate in the bottom of the third inning to reel Pitas back in. McMullen led off getting dirty for a double, Fulton stroked a RBI double up the middle and Bryce Miller slapped a two-run inside the park home run (ITPHR) to right field and were down just one run with no outs.

But the Meatsticks are undefeated for a reason as they retired the next three hitters and then opened up a little ol’ can of whup on the Hares scoring seven runs in the top of the fourth inning.

Mallory Zimmerman, Reed Stolzenfels, Crooks and Stichter all combined for base hits to score three runs followed by a two RBI single by Thomas Mclean and a two TBI double by Densmore for a 14-6 Pitas’ lead.

The Hares managed one run in the bottom of the fourth but the work of Ocanas in left field denied additional runs as she chased down a fly ball to deep left field. Pitas then opened a big ol’ can in the top of the sixth spraying the aforementioned vacuous Tommy V Field with 10 base hits to drive in nine more runs for a 25-7 lead.

And while the game was pretty much over, the Hares weren’t done as they decided to make one last run at the Meatsticks in the bottom of the seventh inning. Erin Stock fired the team up with a bloop single and when Connor Brown, Dave Clement and McMullen all connected for base hits to drive in a couple of runs, the Hares were looking hot. Miller followed with a two RBI double and Brown stroked a three-run ITPHR to the gap in center and if you didn’t know the score, you’d think there was a late game rally in the works. Only problem was, even with all of that hitting and running from the Hares, Pitas was still up by a lot and did what they needed to do to finish off the Hares 25-14.