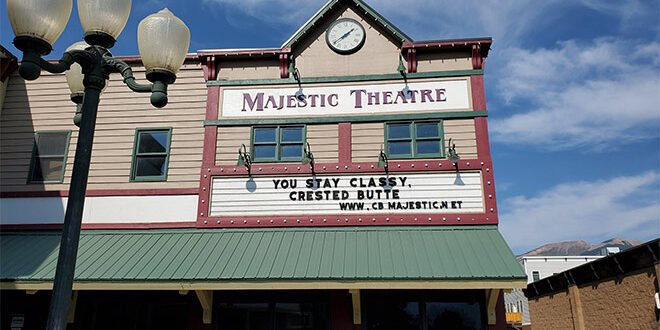 Majestic Theatre slated to reopen this fall after two-year closure

Crested Butte movie-goers, rejoice – very soon the beloved Majestic Theatre will once again open its doors, pop the popcorn and begin spinning the film reels after being closed for more than two years. The Friends of the Majestic non-profit that has been fundraising to “Save the Majestic” is slated to sign a lease on August 1 with the hopes of opening sometime this fall.

We’re so excited,” says Carrie Wallace, former Majestic manager and co-founder of Friends of the Majestic. “I have cried so many times being inside that building again. I get hyped just hearing those swinging doors behind the counter. It feels so good to be back.”

The Majestic Theatre closed on March 13, 2020 due to COVID and officially closed in September 2020 because the previous owners were unable to operate and make rent payments. Former Majestic employees then started Friends of the Majestic with the determination to save the theater and raise funds to reopen as a non-profit movie theater.

To date, Friends of the Majestic has raised approximately $170,000 of its $300,000 goal. “Earlier this summer, the board gave us the go-ahead to pursue the lease because we saw so much momentum, and we’re going to continue to fundraise to our $300,000 goal,” says Wallace. “We came to an agreement with the landlord this month, and we’re signing the lease on August 1. We anticipate having the Majestic open early fall, and are hoping to finish our fundraising while we are getting the building ready.”

Preparations for opening back up have already begun, everything from maintenance, equipment inspections and paint touch-ups to administration, paperwork and outreach to film distributors. Once the lease is signed, Wallace says they plan to submit a liquor license application. Just this week, Wi-Fi was installed, and Film Tech NOC technicians were in town to inspect the film projectors. “After two years of just sitting there, the film projectors are OK,” says a relieved Wallace.

As for the months ahead, “There are a lot of connections we have to reset back up since the business was dissolved,” says Wallace. “We’ll give it a good spruce up and make sure we’re ready. We have to build it back up and make it a movie theater again. We’re going to keep a lot of the things the same, but we’re also looking at ways to improve the experience,” she says.

But don’t worry, some Majestic treasures are here to stay. “Yes, we will be making our popcorn the same way as before,” assures Wallace.

Friends of the Majestic also plans to reimagine the space, showing new Hollywood movies in two theaters and dedicating its third theater into an event rental space for the community. “Using the other theater as a rental space will actually help the Majestic make more profit,” says Wallace, explaining that in addition to most of the ticket sales going back to Hollywood, the theater also owes distributors money if they have to cancel a showing of a film.

“Our town really has a hunger for a casual rental or event space. Somewhere to have a birthday party or staff party, karaoke, a place to raise money for other non-profits. This will help us reimagine how we can utilize this space for the Crested Butte community. This lets everyone get creative. I’m so excited to see what people want to do with it and eager to see if it works.”

As for potential movies we can expect to soon see on the Majestic big screen, Wallace is looking forward to some upcoming blockbusters, like the new Black Panther: Wakanda Forever. Wallace says she’s also turning it to the community. “I’m so excited to get an idea of what people want to see. We want to hear what movies we missed, maybe do one-night showings of movies that came out these last couple years, maybe even the movies that played here in 1994 when the theater first opened.

Wallace stresses that the fundraising hasn’t stopped and hopes that the momentum continues to build now that reopening is in sight. “We’ll continue to fundraise until we reach our goal,” she says.

Share
Previous CPW speaking up for big game animals—and using data to guide decisions
Next Lords of Dirt win, then lose, but remain in the hunt