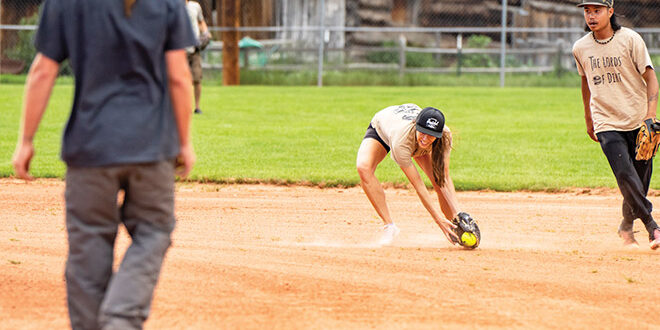 Lords of Dirt win, then lose, but remain in the hunt

Anyone else notice that the last two months of “erratic at best” cell service in the valley has returned our fates to the cosmos? What I mean is that sometimes a call or text goes through, sometimes they don’t. The cosmos is deciding what is and isn’t important and, who is and who is not important.

For instance, according to the cosmos, my daughter and her whereabouts are not important but, a video of Donna Jean Godchaux singing “From the Heart of Me” New Year’s Eve 1978 is because, while I could not contact my daughter recently, I could text that video to a friend.

The cosmos also has complete control over the parking lot at Clark’s, the local postal system, my aforementioned daughter and my bike because after a solid month of no mechanicals, a recent uptick in mechanicals has occurred just when the flies and mosquitos are peaking.

But do the cosmos control softball? That is the question. Mother Nature tried, but failed, and so we are now successfully into the post season in both leagues and the Lords of Dirt kicked off their playoff campaign with a win, only to lose the next game, but remain in the hunt in the loser’s bracket.

The goal was laid out in the simplest of terms prior to their opening playoff game against the Irwin Tuckers when one Lord of Dirt pointed out, “If we lose, we have to ump the next game, so don’t lose.”

Irwin Tuckers looked for a little post season magic having gone the entire regular season without a win, though they did come close to a massive upset early on against the league leading and undefeated Rainbow Unicorns.

They mustered some of that magic early in the game building a 2-0 lead as Elliot Manning tripled and scored and Luis Aguirre drove in a run with a high fly RBI double.

A hit from Prawit Durgan, sacrifice RBIs from Katie McKernan and Billy Watson and walks by Hunter Lucas and Jake Sunter had the Lords of Dirt on top 3-2 but the Tuckers came right back. Isabel Young and Tim Mahan connected for RBI hits and the Tuckers were set for more until the cosmos spoke as a pop up by Hannah Crofut turned into a chaos riddled, inning ending double play, or triple play or maybe even a quadruple play.

The Lords of Dirt seized on the cosmochaos to take the lead back as Morgan Holleran tapped a one-armed single and patience at the plate led to two more walks and two more runs.

Neither team could shake the other though as more pop ups turned into more cosmochaos. It took until the bottom of the fourth before the Lords of Dirt started to make their move as they turned a one-run lead into a 14-6 lead thanks to a seven-run outburst.

Lucas and Davis Collins connected for RBI base hits, Isabel Lucas cracked a high fly RBI and Holleran capped off the rally with a one-armed, two RBI sacrifice hit.

But the Tuckers just would not go away, and they came right back in the top of the fifth inning. Annika Engholm led off with an error-assisted triple and scored as Young smacked a double. Jack Foersling doubled and scored on a triple by Tish Sherman and when Crofut and Aguirre each connected for RBI hits, the Tuckers were just two runs down and full of hope.

The dream of early post season success was soon deferred though as the Lords of Dirt rattled off another five runs. Sunter started the scoring with a RBI double, Collins tacked on another run with a sacrifice hit, Collin Dill punched a RBI double and Holleran struck once again with a one-armed, two RBI single up the middle for a 19-12 Lords of Dirt lead.

The Tuckers mustered one last run, but they were tapped out from producing any last inning heroics and will spend their next playoff game in the loser’s bracket with elimination on the line.