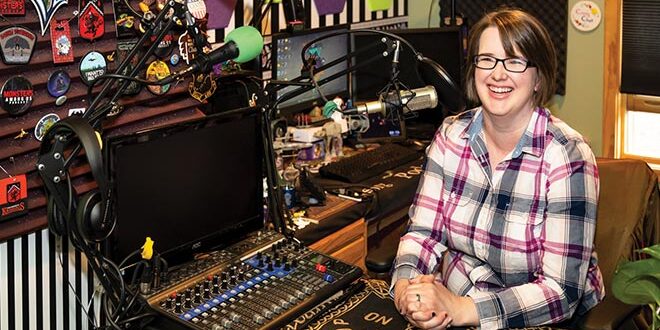 Annie Rijks-Flora spent the first decade of her life growing up bilingual in Steinbach, Germany. One of four kids born to Teresa and Jozef Rijks, they’d speak English at home, because it was easier for her American mother, and German in school and socially. In her European childhood they played soccer in the streets and ate spaghetti “eis,” a German ice cream squeezed through a machine into spaghetti strings, which she says made it deliciously airy and light. “I was a happy child. My siblings are awesome and I love my family. We had a lot of fun growing up together,” she declares.

She was 10 years old when her parents decided to move the family across the Atlantic and over the mountains to Crested Butte in 1993. Annie’s mom, a native of La Junta, Colorado, followed her sister, Donna Rozman, to CB. “Dad was working a stressful job in Germany and looking to change careers so when Susan Anderton’s gallery went up for sale they bought it,” Annie says of her parent’s acquisition of the art gallery they call Rijk’s Family Gallery. Starting fifth grade in a new country was a bit of a culture shock for her, but what impressed her the most was having a locker at school. “I had only ever seen them on TV,” she muses. “They had them for the older school kids in Germany, otherwise you carried everything in your backpack in elementary grades. I thought having three months of summer vacation was the coolest thing ever because we only had six weeks of vacation in Germany.”

“I was trying to get into mountain biking but I really took to hiking,” she says. “My parents always had activities planned for us, they kept us busy.”

Annie made friends here easily. “I had a really wonderful group of friends growing up and it was great having siblings and cousins here. I tried to be a super sporty kid growing up because everyone was. I joined the Nordic ski team in middle school, but I had never been on skis and all those kids grew up on skis. I did some downhill, I thought it was fun, but I wasn’t in the same ballpark as my friends whose every free moment was spent skiing. I kept trying to be a sporty kid, I was on the basketball team for three years, volleyball and Nordic skiing but then I found theater when I was in high school. I found the place that made sense to me, where I fit in more, where I wasn’t constantly the weakest link,” she laughs. “At the Mountain Theatre, I auditioned for anything and everything, but the show I remember the most was Hamlet, mostly an all-girl high school production with Teens On Stage. I played Polonius,” she says, and after that she was hooked. “The theater became my favorite place,” she says. Annie graduated in 2000.

Knowing that theater was a hard industry to break into and make a living in, Annie took a gap year after high school. “I wasn’t sure if I actually liked theater or just the CB Theatre.” She was accepted into an apprenticeship at the prestigious Dallas Theater Center, working in all the different departments to gain the maximum experience, from the prop shop and costumes to working on the sets and sound and lights, learning every aspect of the theater. She got in some onstage acting as well.

After her gap year, Annie enrolled at the College of Santa Fe and majored in theater with a minor in film. She had taken Soo Bahk Do in high school and taught it while in college. Annie was cast in the campus sketch troupe, where actors write and perform their own comedy material. “We had sold out shows and it was a fun group to be a part of. We were called Underwear Society. I think I’ve always been better at comedy, or always drawn to comedy.”

She graduated in 2006, and Annie and another comedy troupe friend decided to move to Chicago. “Most people move to New York or L.A. and we decided we liked Chicago. It’s a dog city, you see a lot of people with dogs. I had a dog named Juno, he was the best black lab. Coming from CB, Chicago felt less overwhelming,” she says of the other cities. She was hired at the Goodman Theater to run crew and help backstage. “I could have stayed there doing run crew forever but then I couldn’t perform and I wanted to audition for stuff. I could either waitress or do temp work so I could do more acting.” She wound up as a full-time back office stock trader, “It’s basically data entry because I’m not a financial advisor.”

While she was working, she took classes at night at The Second City Conservatory. “One of the big improv theaters in Chicago is Comedy Sportz so I started performing there and got hired onto the main stage as a comedy performer,” Annie explains. She was also on the Harold Team, which is a long form improv troupe. “I was performing in numerous comedy clubs throughout Chicago and the suburbs.” She met her husband David Flora in 2007 through Second City when they were cast in a couple of shows together. They married in 2016.

Annie’s one goal was to quit her day job. “My colleagues said I wasn’t a real performer until I didn’t need my day job. I got to a point where I could actually become a full-time performer but then I thought, I didn’t want to quit. I liked my job and the people I worked with and having insurance. I decided I didn’t want to quit just for the sake of quitting. I enjoyed doing both acting and my day job,” she says.

Annie and her hubby decided to go into podcasting together and in 2019 created Quiz Quiz Bang Bang, a trivia podcast. Although she was performing less and less, she says, “I had podcasting so I felt I still had a creative outlet. We had patrons and that gave us income from our podcasts. With podcasts, you don’t get that same feeling and energy as you do on stage, but people tell us stories about how it helped them get through a rough time. It gave them something to do during COVID lockdown, “she says of the worldwide podcast that also had Zoom meetings across the globe.

She and David had been talking about moving for a few years as they were ready for the next chapter when COVID hit. “Since we weren’t tied to stages anymore because of our podcasting, we could work from anywhere. So I convinced David to move to CB. I wanted to be close to my family again,” Annie says.

They moved in February of 2021, in the middle of COVID. “What a great place to be during lockdown. Even when lockdowns were lifted, it was a better, safe place to be. My older sister Mamie moved back from Munich six months after I moved back and my brother Robby was already back,” she explains.

Annie still has her Chicago day job. “It’ll never go away,” she laughs. “We still podcast our trivia show and David has a paranormal podcast called Blurry Photos.” The Center for the Arts has hired them to do live trivia shows occasionally. They recently did a benefit for the Save the Majestic team with all movie-related trivia questions. Annie is also on the board of the CB Mountain Theatre, “It’s very exciting, we just hired Alec Lindeman as the new executive director.”

Although Annie isn’t onstage yet, she’s hoping to act in something sometime. As far as her aspirations for the CB Mountain Theatre she says, “I’m really hoping we can reach out to the community to let everyone know they’re welcome, whether they’re interested in acting or tech or bartending and want to feel a part of it, even just as an audience member, that the Mountain Theatre is a fun, welcoming and special place to be.” She’s been coaching improv with Subject to Change, the theater’s improv troupe. “If they’re short on performers, I’ll perform with them, but I want them to get as much stage time as possible,” she says.

Being back in her community has meant everything to Annie. “I love being close to family regularly, it’s such a treat to be able to spontaneously walk the dog up Peanut Lake with my mom. You can’t beat the views here, the wildlife and hiking… it’s all breathtaking and humbling and awe inspiring,” she says. “And my childhood best friends still live here. I’ve come home.”

Share
Previous Lords of Dirt win, then lose, but remain in the hunt
Next Summer visitation numbers trending as expected…