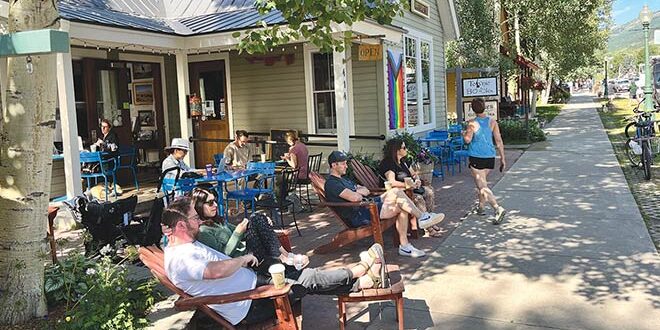 If the summer tourism season feels less chaotic than the previous two, that’s probably because it is. Summer started off very soft up until the Fourth of July holiday and then picked up, but numbers are still not matching what was seen the previous two summers. According to lodging numbers compiled from the Tourism and Prosperity Partnership (TAPP) via their partnership with KeyData, the numbers appear to be consistently off by about 10% over 2021. That would fall in the ballpark of the projections put out at the start of summer by TAPP that predicted summer numbers would be down about 6% (see June 3 issue of CB News).

Crested Butte-Mt. Crested Butte Chamber of Commerce executive director Scott Clarkson said he heard from several businesses that the week prior to July 4 was much slower than expected. He noted the weather was a bit chilly and wet so some people may have put off their trip to Crested Butte at that time.

“We’re hearing that the booking window has shrunk from the booking date to the arrival date; plans are being made more last-minute,” he explained. “The travel plans of the drive market are more negatively affected by weather forecasts and rising gas prices. This may have simply resulted in the decision not to come here considering Denver/Boulder entertainment draws like Red Rocks and Rockies games that are back to pre-pandemic attendance. Pent up demand for these activities over the past two years is releasing and may be having an effect on regional vacation travel. While it may appear a week out that bookings are off by 20% or 25% compared to last year on any given date, that usually shrinks to about 10% by the time the day arrives.”

Clarkson said while the Visitor’s Center at the Four-Way Stop in Crested Butte has been consistently busy, the one at the Mt. Crested Butte Transit Center has been lagging significantly from previous years. His June and July numbers show that the downtown location is seeing between 10% and 15% more people throughout the week with Thursdays and Fridays being the busiest days. Up on the mountain however, visitor traffic is off compared to 2021 by 26% to 36%.

“That does not mean that lodging occupancy is off as much as walk-in visitors have been in Mt. Crested Butte,” he explained. “Our walk-in visitor data basically supports that the end of June/beginning of July was soft compared to 2021. This also supports that walk-in traffic is up in town. I don’t have an answer as to why the Mt. CB Transit Center is down other than possibly because of more weather-related lift closures and fewer restaurants being open on the mountain with the Avalanche Bar and Grill closure. Keep in mind that these visitation numbers are basically units of people with whom an interaction or engagement was had. One person may be representing more than one person.”

Clarkson said that most of the lodging in Mt. CB are hotel rooms which tend to be booked last and cancelled first when compared to other types of accommodation. He said short-term rentals, condominium and vacation home rentals typically have a booking curve that begins further out from the day of arrival, whereas hotel rooms can be more last-minute.

Digging down into details, Clarkson said Thursdays and Fridays are busy downtown while Mondays and Tuesdays on the mountain see the most traffic. “To me this trend makes sense with drive market visitors arriving in CB for the long weekend,” he postulated. “At the Mt. CB Visitor’s Center, my guess would be that those here for a week or more arrive on different days, or they take part in other activities then head up to Mt. CB/CBMR later during their stay. Or perhaps they may arrive on Saturday or Sunday for a longer stay and hit the Adventure Park or take a scenic lift ride on a Monday or Tuesday.”

Maybe the busiest visitor’s center is located in Gothic. According to Rocky Mountain Biological Laboratory executive director Ian Billick, the traffic at the visitor’s center there has been growing every year for the last three years. He said in June of 2020 there were 2,899 visits, in 2021 there were 3,299 visits and in June of this year 4,007 people stopped in their Visitor’s Center. He expected July numbers to be similar citing several 500-plus days.

While specific numbers have not yet been tallied for backcountry camping, Clarkson said his read on the matter is that there are fewer people here pitching tents or parking the campervans up the various drainages. His observations while out riding are that there are empty camping sites available most days including on the weekends. That observation might be confirmed through grocery sales tax which for June was down noticeably at the start of the summer season.

Sales tax looking flat but airline seats are up

Sales tax figures for early summer in Crested Butte are basically flat compared to a year ago but keep in mind that product costs are more expensive and that could be shoring up sales tax numbers even with fewer people here. The tourism indicators of the restaurant/bar category along with the groceries were off in June and July numbers are not yet available. While restaurants and bars are up about 13% year to date compared to 2021, in June that category was off by five-and-a-half percent. Grocery sales are almost even for the year but in June they were down just over 9%. Crested Butte town manager Dara MacDonald said it appears overall summer sales tax will be flat or a bit down compared to 2021.

Mt. Crested Butte sales tax figures for June are not yet tallied.

TAPP numbers are showing that July occupancy for lodging is down about 7% but the room rates are up about 10% from 2021. That means fewer people are here but there is more spending per person. TAPP marketing director Andrew Sandstrom said it appears that August will be about the same or a bit down from last year in terms of number of visitors, but they will be paying more per room which indicates they have more discretionary income. September is expected to be a busier month than 2021 with a strong 15% increase in visitors projected.

“For us, we are seeing folks with more disposable income booking earlier and spending more. Tracking airlines, the seats are as full as ever this summer,” he said while noting that summer visitors arriving by airplane make up less than 10% of the total visitor market. “It does appear that the folks making last-minute trip decisions are not coming as much as they were last year.

“This is correlated to the flights which are performing extremely well,” Sandstrom continued. “The JSX flight out of Dallas is filling most seats quickly and United seats are filling up consistently and doing very well too. That said, folks taking a last-minute trip from Denver or other drive markets seem to be booking less and that is bringing the numbers in the heart of summer down from last year. Maybe this is people being more conservative because of inflation and rates being up. Maybe it is that there are a lot of city activities that weren’t available last year.”

Clarkson said the people that are coming here this summer really appear to like it and they appreciate the people and place. “From overhearing visitors in the Four-Way Visitor’s Center, there have been quite a few first-time visitors, not only nationally but from within Colorado,” he said. “July is certainly skewed toward wildflower aficionados. It is a bit surprising, but we have seen a number of people return to the Visitor’s Center to thank the information specialists for the info that made for a terrific hike or a great meal. That is different from what we’ve seen in the past. Is ‘Nicer People’ a trend?”

A final hoorah on the horizon

The Crested Butte Arts Festival’s 50th anniversary weekend is coming up and that traditionally signals the start to the end of the summer as second homeowners and tourists prepare to leave to get their kids back in time for the start of school. “Arts Festival is one of the last hoorahs of summer for sure,” he said. “Right now, they are projecting somewhat fewer attendees than last year based on fuel prices and hotel costs. We are still more than a week out, and they expect those sales to even out the closer we get to the event.”

Overall, the numbers feel consistently down from last year. There is still a bit of summer to go but Clarkson concluded that perhaps, “the summer 2022 volume is just right…”