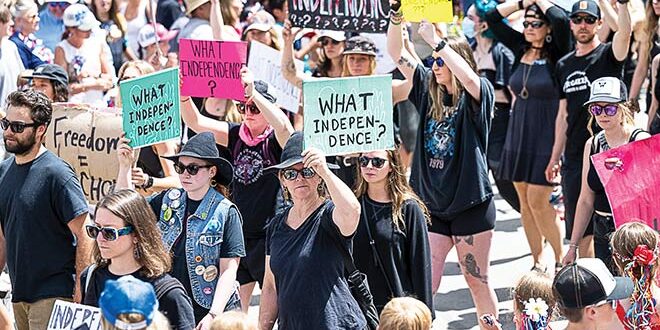 On top of everything else…

A heat dome? What? That’s not exactly what we need right now as it feels everyone is already late summer tired and so much is teetering on an edge.

We’re supposed to be under the influence of a heat dome starting at the end of the week. The forecast says it’ll be in the 80s in CB this weekend. Ouch. These days when everything feels more than a bit off and everyone appears on edge and under pressure, a heat dome is just what we all have been waiting for…not.

According to an alert from AccuWeather, “meteorologists expect temperatures to skyrocket across the Intermountain West heading into this weekend. The hot conditions will pose an increased risk of heat-related illness to occur, particularly among those working or recreating outdoors, as well as residents without access to air conditioning.”

The heat dome is explained basically as a shift in the jet stream that will allow a heat dome to build and under that dome air will sink causing temperatures to climb and precipitation to generally be limited. The deserts in the southwest are expected to see 110-degrees. Cities in the west will likely set record temps. The monsoons bringing the backcountry around Crested Butte a gorgeous green backdrop and abundance of wildflowers will take a break.

I’m not sure a heat dome is what we need to pull people back from the edge. And Lord knows there is no shortage of edge.

Recent Supreme Court decisions basically now allow individual states to determine what women can and can’t do. I appreciate the sign in a ranch pasture along Highway 135 that boldly states, “Women Are Not Livestock.”

What year is this again?

Given their interpretation of the 14th Amendment, other decisions likely to come from the court would do the same thing when it comes to any manner of privacy and liberty issues – whether it is what contraception you might use or who you might marry or sleep with. It feels like the court is set up to return the country to the mid-1800s and remove government oversight of all business while letting conservative white men with the mindset of 1860 (Mitch McConnell anyone?) rule the states.

Yet the idea of controlling firearms in the smallest of ways is apparently abhorrent to the Supremes, even as a young man decides to legally buy a high-powered rifle and spray bullets into innocent families during a sleepy Fourth of July parade in a quiet suburb of Chicago. Meanwhile, police in Akron, Ohio shoot a black guy 60 times as he ran away from them. Have we not learned anything since George Floyd?

More former Trump insiders are apparently stepping up to speak important truth to the Big Lie. Yet without any solid proof, the believers refuse to see anything other than what Donald tells them.

Crested Butte’s Fourth of July parade was pretty mellow and tame compared to historical parades. But I was impressed with the long line of stoic women and men protesting the country’s recent dramatic changes. Silently marching while dressed in black, but making a loud point, they represented America – the America that is still a place where citizens are allowed to publicly protest the government. They did so effectively, and I doubt it will be the last time. They are fighting the edge.

More than one person asked why I would run last week’s letter signed by David Justice that espoused a white racist philosophy. Fair question. I too found the letter crazily confusing and filled with racist trigger points. I used an expletive to describe it when we were doing our “galley” of the paper. However, I believe it is important for a community to know that such positions exist up here in the bubble and people should be aware of those who hold such views. To hide that belief beneath a basket and pretend it doesn’t exist here, is in my mind, more dangerous than allowing someone the opportunity to state what I see as their oftentimes unhinged beliefs. It is part of what a community newspaper should uncomfortably do.

I continue to believe people here are smart enough to discern the crazy and hateful from the reasoned and debatable. I prefer shining a light on what in my mind (but not David’s and his associates) is crap more than letting people hide it in darkness. And BTW, the chair of the Gunnison County Republican party said Tuesday that while Justice is a registered Republican he is not on the county party’s leadership committee and was not representing the local GOP with that letter.

A young inexperienced hiker just barely 26 years old falls off a cliff on Mt. CB while on vacation and dies. A local young adult camping with her friends is hit by a car. Those things put every parent on edge. The suddenly fast changes coming to the valley have people on edge whether it is the new people, the new levels of real estate prices or the new pace of gentrification. The amount of visitors – for some, too many and for others, not enough — has people on edge. It sure seems the summer numbers are starting off slower than the last couple seasons…putting some on edge. Searching for a place to grab a bite in the downtown business district without a huge wait and hassle is edgy as so many places are either closed or overtaxed. It leaves a bad taste and I imagine pushes some past the edge of wanting to come back. The idea of new property taxes making it more expensive for workers to live here has people on edge. The amount needed to pay the grocery bill and filling up the tank has people on edge. And, and, and…

What can go wrong?

At least for us here at 9,000 feet, 80-degrees is a lot better than what those in Denver will be dealing with and for that we are again fortunate…but prepare yourselves for the heat dome!