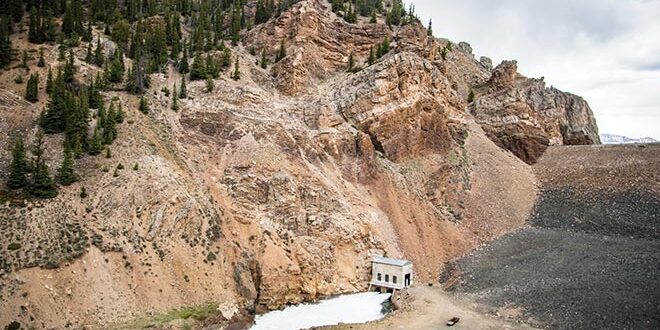 In 2020, GCEA and the Uncompahgre Valley Water Users Association (UVWUA) formed Taylor River Hydro, LLC to jointly develop, own and operate the plant.

The Taylor Park Dam was built in 1937 and was originally designed to incorporate a hydroelectric facility at a later date, explained Feier. The Bureau of Reclamation owns the facility and has awarded a Lease of Power Privilege to Taylor River Hydro, LLC. to get the hydroelectric project running.

“What’s really made this project possible is our partnership with UVWUA,” said Feier. “We’ve spent a long time developing that relationship and it’s critical to this project’s success.”

The new 500 kW turbine generator will be mounted at the base of the Taylor Dam and is designed to run 24 hours a day, seven days a week, 365 days a year. “It’s really advantageous in that sense. It will always have enough flow to generate electricity, even in the winter,” explained Feier. “That’s about as maximum as we can handle on our existing infrastructure there in the canyon. But it does set the stage for an expansion at a future date where we could upgrade the line.”

“Hydro also has a very good track record of producing for very long periods of time. There are hydro facilities that have been running for 100+ years,” said Feier.

The project is also very cost effective in terms of kWh produced, versus a solar project, explained GCEA CEO Mike McBride. Even though it is a small generator, it would produce about the same amount of energy annually as some 2,500 kW fixed-tilt solar arrays. “Another advantage of this renewable project is it’s not intermittent, as is solar. Because this produces around the clock it’s a very good resource for us,” he said.

The hydro project will be another resource as GCEA continues to diversify its supply portfolio with renewable and sustainable resources. GCEA is working on the Sunshine Park solar project just south of Crested Butte, and is also pursuing another community garden solar project in addition to its two existing locations at the Crested Butte wastewater treatment plant and at the GCEA headquarters in Gunnison.

“We’ll be very close to 7% of our power supply being produced locally once Taylor and these two solar projects are completed,” said McBride. The other 93% comes from GCEA’s electrical supplier Tri-State Generation and Transmission Association, Inc.

“We are relying on Tri-State for a large portion of our strategy with respect to the energy transition and climate action because there’s so much more that they can do, and much more cost effectively, than we can. They’re on a path to increase their renewable energy and making a lot of progress.” Tri-State is aiming to be 50% renewable by 2024, 70% renewable by 2030, and achieve an 80% carbon reduction from their 2005 level by 2030.

Share
Previous Profile: Jay Prentiss
Next On top of everything else…