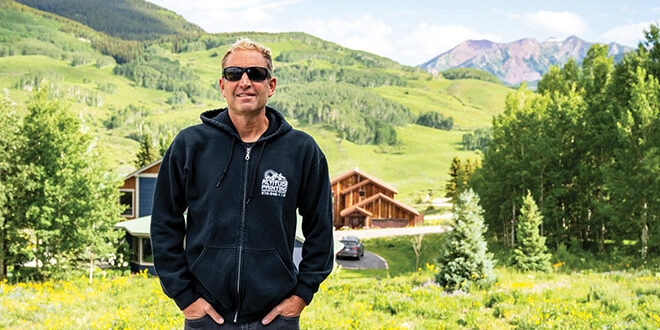 Jay Prentiss was born into an adventurous family and from a young age his parents would take them skiing in Quebec in an old step van his father converted into a camper. If it got too cold, they’d stay at a cheap motel. The family loved to travel and would take road trips across the country. Eventually, his dad bought a little cabin at the base of Mount Saint Anne, a ski area in Quebec.

Born and raised on Long Island, New York, Jay’s family moved to the Pennsylvania Poconos when he was 15, where he could throw a rock across the Delaware and hit the New Jersey shore. The Delaware was relatively calm and deep where it flowed by their property. “We were into swimming and eventually we got boats and jet skis. It’s wilderness, a really beautiful area,” Jay recalls.

Although Jay enjoyed high school, life in the Poconos was quite a bit different than in New York where he had moved from. “It was very rural. I was always very much into sports in New York – soccer, wrestling and lacrosse – but I got more into individual sports in Pennsylvania, like skiing, motorcycling, rock climbing and mountain biking. I bought the first mountain bike that came into our town in 1986. I hadn’t been to Colorado since I was 4 years old and I always wanted to go because of skiing and mountain biking. I was a NASTAR ski racer when I was a kid then I got into club racing on a ski team when I moved to Pennsylvania,” which he did all through high school. Jay graduated in 1988.

Jay dreamt of attending college in Colorado. “I got a brochure of Western State, it had a photo of the ski resort and then the campus and I pictured a campus at the base of the ski area,” he says.

He was accepted at WSC with a scholarship and ski raced all through college. “I had heard that Gunnison is the coldest place in the nation. I had a down jacket with me on the plane… in August. It’s 90 degrees in Newark and when I get off the plane in Gunnison it’s like 85 degrees, I don’t see any big mountains and I’m thinking I landed in the wrong place because it’s like desert and hot and I thought I was going to be skiing tomorrow. I realized that it wasn’t the coldest place in the country every day of the year,” he laughs and adds, “I fell in love with it, with everything, and I had four amazing years.”

Jay remembers the first dusting of snow in 1988, which was only an inch but enough to stoke his snow frenzy. He and a friend drove up to CB determined to ski and ruin their skis if necessary. “When it really dumped for the first time and they opened the resort, I had never seen anything like that before. The first year I got to Western I think was the first year the North Face opened. We skied everything. We’d hike up Kebler, no skins, no beacons, and boot-pack up.”

Jay returned to Pennsylvania to work in the summers and come back to the valley the rest of the year for mountain adventures. “We’d ride bikes, climb mountains, rock climb and I learned how to kayak.” He graduated in 1992 with a BA in business administration and a minor in psychology but he really didn’t know what he wanted to do with that, except run a business. ”I had an obligation to be successful, so I moved to New Jersey, bought my own house, and started a small wholesale car business in New Jersey and Pennsylvania. I’d buy cars, boats and motorcycles for resale.” Two years later, he merged with his dad’s business. Even though things were going just swell, he missed Colorado.

So he bought a van, fixed it up into a cheap mini camper, sold his house, broke up with his girlfriend and hit the road in early January heading south for a hard-earned two-month party in Cocoa Beach before making his way back west to Boulder and Bozeman for some rock climbing, skiing and mountaineering. “I was living the life for a year but I really missed the Gunnison Valley. I ended up back in CB the fall of ‘96.”

Jay recalls that there was actually a serious housing shortage that year. “I was living in my van but it was starting to get cold and I couldn’t find a place. My friend Jody and I convinced Fritz of Mountain Express to let us share a room in his house, we weren’t dating but we both needed a place to live. I stayed for six years and I wound up having all kinds of roommates even after Fritz moved out to the Front Range.”

Jay was painting in the summers and, he smiles, “Winters, I wanted to be a ski bum so I got a job working at the Twister Warming House at The Fondue. I also became a DJ at KBUT. My show was The Road Trip, my roommate Jody and I did it together. I got a part-time job working for the CBMR race department. That year we put on the X Games and all the ski races.” Through a friend, he got a gig doing extreme skiing photoshoots for one day and it turned into more work and a trip to Europe.

“Eventually, I started my own painting business, Altitude Painting, and now we have 17 employees,” he says. In-between work, Jay continued adventuring, motorcycling, climbing tall mountains in Peru and Denali and skiing. “But I really wanted to focus on making my business successful. I bought 10 lots in Gunnison out of foreclosure in the early 2000s. Because of the housing crisis at the time, I was really interested in creating affordable housing, so I put 10 modular homes on those lots.”

Jay had fallen in love with a Mexican town he had visited, Huatulco, and was able to purchase a beach home there. “I’m a big surfer. I was fortunate to get into a home in CB back when it wasn’t expensive, but I worked my ass off to do it. I was never greedy and always took care of my employees.”

Jay met his wife, Krista Seier in CB, she started working for him. In 2015 their son Ryder was born.

In early March of 2020, Jay contracted COVID and to everyone’s astoundment, it slammed him hard. “At the time, it was mostly older or compromised people who were affected and dying, not people like me. I have changed a lot of people’s behavior because of my COVID. A lot of people may not have taken the virus seriously if they hadn’t known me. It was two of the most hellish years you could imagine,” he relays and says that he was in and out of the hospital for over a year. They had to leave their home because he couldn’t breathe at elevation. They moved to Grand Junction but ended up at the Mayo clinic in Arizona, then bought a camper van and lived in it in New York for doctor appointments. When they were able to return home, Jay felt he was finally starting to live again. “But I’m the poster boy for long-haulers. I’m still seeing the doctor regularly for COVID,” he says.

Back in CB, “We’re living the dream and I feel that life is really, really good. Crested Butte is the most beautiful place in the country. I have my business here, and an amazing group of people working for me. I want them to live a good life here in the valley. Having a son and my wife and family really kept me going when I was sick. She was a saint for what she had to put up with. This is the best place to raise a child, it’s like winning the lottery.”