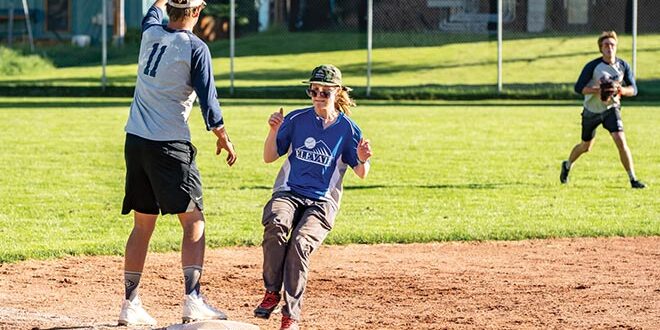 Blame it on the rain that keeps fallin’ fallin’

You’re welcome. That Milli Vanilli song should be firmly stuck in your head now. But seriously, softball coverage last week was trumped by Mother Nature as recent afternoon storms forced the postponement of numerous games. But I will take the rain. And for those Tuesday/Thursday teams wondering when and where those rained out games are happening, merely go to the schedule and scroll back to week five and week six and it’s all there.

Is it me or is “boutique” trending? We got a “boutique” airline flying into Gunnison and it seems that there are a number of people buying houses here that work at a “boutique” investment bank.

“Zenith Investments, how can I help you?”

Meanwhile, in local softball, where most of the investing done is in blood alcohol content, things are coming to a close in the regular season with the playoffs just around the corner. So, I felt it wise to check in on a couple of teams in the Tuesday/Thursday league as it appeared Elevate was struggling under the pressure as defending champions having lost three games this year, and the Bangers were on a five-game winning streak.

After what I saw Thursday though, things seem to be back on track. While still missing player/manager CJ Hoover to injury, Elevate asserted themselves as a potential repeat title contender handing the Bangers a 29-11 thumping. As for the Bangers, well they were hot and, perhaps, now they’re not. But, and there’s always a but, anything can happen in the playoffs.

It started out as a quality showdown between two teams as Elevate took a 3-0 lead in the top of the first inning thanks to base hits by Christian Allen and Kelly Jones and a base clearing dinger from Sam Reaman.

The Bangers immediately climbed back into the game as RBI base hits from Heather Culley and Slater Weil pushed in two runs in the bottom of the first and a sacrifice RBI by Abby McGee tied the game in the bottom of the second. And it could have been more had it not been for some untimely strikeouts by a couple of hitters who shall remain nameless, and the defensive work of Elevate third baseman RJ Spinella.

Elevate then seized on the hitting shortcomings of the Bangers in the top of the third inning to build a five-run lead. Hits from Reaman, Spinella and Paige Rumery loaded the bases and Yan Linero, back from Columbia to help push Elevate to a second title, Grant Spear, Heather Theiss and Allen all connected for RBI base hits.

The fourth inning was almost a carbon copy of the third for Elevate as the top of the order got on base and the middle to bottom of the order all drove runs in for a 14-3 Elevate lead.

The Bangers finally shook off some of their strikeout woes to mount a threatening comeback in the bottom of the fourth inning. Gracie Willette and Mikey Weil led off with base hits and scored off hits from Joe Coburn and McGee and Carey capped it all off with a moonshot two run home run to pull the Bangers well within comeback potential.

Elevate was far from done though as Sophia Gonzales found her swing for a single. Spinella and Rumery followed with additional singles to load the bases and Linero went longero stroking a grand slam.

Elevate re-loaded the bases and Jones and Reaman drove three more in and when Spinella stepped to the plate to smack a two-run home run, the umpires had to call the 10-run rule.

Things got entertaining then as the Bangers looked to their closer Theo to take the mound. His erratic pitching style flummoxed the Elevate hitters and the Bangers did manage to score a few more thanks to a solo shot from Slater and a two RBI single from Culley.

But the circus show on the mound soon came to an end as Reaman connected for one more grand slam for Elevate and they coasted to the 29-11 win.