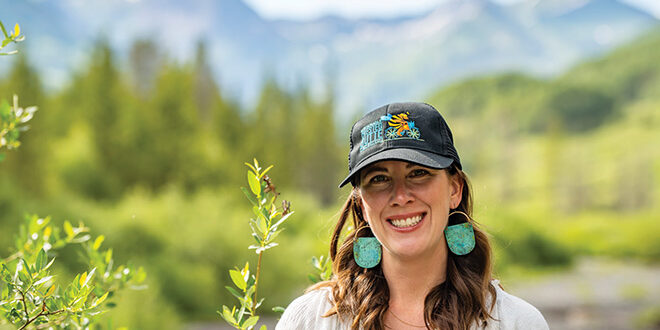 It made perfect sense to Nicole DelSasso that she was destined to wind up in the mountains of Crested Butte, especially after she discovered that her surname referred to the Gran Sasso mountain range in the Abruzzo region of Italy where her family hails from, “sasso” literally translates into “rock.” Her Italian grandfather started a cabinet-making business out of his garage in Joliet, Illinois, where her dad and younger brother still work. Nicole’s mother was a dental hygienist and now leads an oral systemic health organization. As kids, the family would take yearly summer road trips out west visiting national parks and enjoying whitewater rafting, “I wanted to be a river guide after those trips,” she recalls.

From the time Nicole was 10 years old until she went to college she was an English riding equestrian, spending her time in training and show jumping. “It’s very proper, your horse has to look a specific way, along with your form and posture. It’s very graceful,” she explains.

She competed at midwestern shows, traveling with her barn pals. “All those adventures made me want to move away out of the city and suburbs, but I didn’t know where.”

Nicole graduated from a Catholic high school in 2000 and attended Ohio State University, thinking she wanted to be a veterinarian since she loved animals. However, after a few classes she realized she couldn’t memorize anything and then there was organic chemistry, so she switched her major to humanities and “Mostly cultural studies because it’s so broad,” which she says was the attraction for her. “It was more about chasing a path to a career that had a broad perspective with a taste of a lot of different things. I wanted to try something new,” so she enrolled in a Semester at Sea. “It’s a three-month study sailing across the globe on a cruise ship,” Nicole explains. “I went to 11 different countries. We studied each country on the ship before we got to the country.” They started in Vancouver, then two days on open seas to Japan, traveling from there to China, Vietnam, Thailand, India, Africa, Brazil and Venezuela, before being dropped off in Florida. “What other time in life do you get to spend time doing all of that travel at once? It made me want to travel more and have more adventures,” she determined, and graduated in 2005 with a BA in Comparative Cultural Studies.

After college, Nicole returned to Chicago and got her first real job as a program manager for the Chicago Humanities Festival. “It’s a two-week long event with many different happenings from poetry to theater. You plan for it the whole year.” After a couple of years, she realized she needed more of a business background. “It was great to learn about culture, history and social problems but what are you going to do with all that? I wanted to do something that would positively affect society.”

It was 2008 and the recession had hit, so Nicole decided that enrolling in an MBA program at DePaul in Chicago would be the best use of her time. She was working part-time as a restaurant server but really wanted to work in environmental issues. “I wanted to work on helping our planet survive all the destruction we cause to it,” Nicole says. She was hired by an energy non-profit that was leading programs to help municipalities reduce their energy use. She earned her MBA in 2010 and went to work for the U.S. Dairy Industry, helping farmers across the country reduce their energy use. “I’d fly all over and talk to farmers about the equipment they were using on the farm and I’d talk to them about using different, more energy efficient equipment which would also save them money,” she explains, like a more efficient way to pump milk that uses less energy. “The dairy industry at the time had a goal to reduce their greenhouse gas emissions by 2020. They were really ahead of their time as an industry for a goal like this,” she says.

In 2013, Nicole became a sustainability consultant at Guidehouse, where she’s still employed today. Guidehouse is a global consultancy for corporate, government and utility clients where Nicole helps big corporate clients reduce their greenhouse gas emissions. “I work with corporations like Pepsi and Taco Bell, but I also work with small governments, like Crested Butte,” where she led the Climate Action plan in 2019. She moved to CB six years ago when her company let her work remotely. She and her hubby, Jeremy Herzog, found CB on one of their many adventures. They had met in Chicago and traveled all over looking for the perfect mountain town to relocate to. “We wanted to live in a small town where we could give back to the community and enjoy the outdoors. When we moved here in 2016, I started volunteering for Sustainable CB.” She’s been board president for the past three years.

Nicole is pretty excited about all the things Sustainable CB has accomplished for a small organization. “Our mission is to reduce waste in the Gunnison Valley. We have a program called Waste Free Events where we rent event place settings for businesses, weddings and events. It’s really competitive pricing compared to other services who provide this but we’re keeping the waste out of our landfill. We also have a program called Boomerang Bags, recycled material made into bags that you pick up at stores in town and on the mountain to be used instead of paper bags, then you return them to store,” Nicole explains.

Another successful program she’s proud of allows residents and businesses to recycle items that curbside and CB don’t accept, like electronics, hard plastics, outdoor furniture and bike parts. “Unfortunately, we had to stop the program because we need to find a permanent location (for drop off) and secure more funding for it. But we’ve diverted over 40,000 pounds of material from the landfill. It’s quite costly which is why we really need the support of the town and county to continue this service.”

Nicole takes time to go to yoga, hike with her golden retriever Bruce, and in the winter she’ll take to the trails to Nordic ski. “I love the community. I love that it’s small and everybody knows each other and wants to help each other out. I’ve met a great group of friends and I love that I can just walk out my door to enjoy all the activities and the outdoors. I feel like I’m able to experience a bit of the adventure I was seeking but I also love my role with Sustainable CB and giving back to the community by being part of the change that we need to see in the world to keep our town sustainable and thriving.”