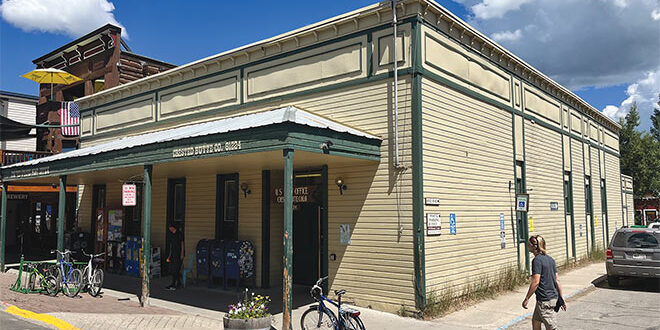 [  By Mark Reaman and Kendra Walker  ]

The United States Postal Service (USPS) informed the public in the spring that the lease on the current building at 217 Elk Avenue would not be renewed in 2026 so the agency would be looking for a new location in the 81224 service area. USPS officials initially proposed finding a new spot in the town of Crested Butte that could accommodate future growth, so the hunt was on for an 11,390 square foot building. But there are few such existing buildings inside the town limits and building one that large would take a lot of time and money. The USPS is conducting a public comment period on the relocation until the middle of the month.

Representatives of Crested Butte, Mt. Crested Butte and Gunnison County penned a joint letter (yes, a real letter to a PO Box in Greensboro, North Carolina) to the USPS outlining their joint suggestions on how best to address the relocation issue.

The letter makes clear that an 11,000 square foot building is not currently available and would be “challenging” to build in Crested Butte or Mt. Crested Butte (the 81225 zip code). A town-owned lot at the corner of Sixth Street and Gothic Avenue could perhaps accommodate a building that size but officials say it would max out the parcel and better solutions are possible.

The letter starts off by suggesting the three government entities could “partner” with the USPS to evaluate relocation proposals. The overriding idea in the joint letter is to reduce the new facility size requirements thus reducing costs for the USPS and making it easier to find suitable locations for new facilities while providing adequate service for the service areas.

The letter first suggests putting the main USPS facility in a central location within the town of Crested Butte that would allow the new post office to continue to be walkable and bikeable for Crested Butte’s 1,639 residents and minimize traffic and air quality impacts of a new facility.

The second point is to consider establishing a new post office within the town of Mt. Crested Butte to “re-establish and effectively serve the 81225 zip code and the town’s 964 residents. A post office in (that) town will provide essential service to residents and facilitate the town’s ability to collect tax revenue more effectively,” the letter makes clear.

The letter emphasizes that any relocation should not then remove the postal annex in Crested Butte South. “An elimination of this facility would inconvenience the approximately 1,700 residents of Crested Butte South and significantly increase the transportation impacts of the new facility,” the letter states. The current CB South annex has about 200 post office boxes “and expansion of the facility should be considered to serve more residents of this area.”

Throwing up the Hail Mary pass, the letter requests that the USPS consider establishing home delivery for people living in the 81224 and 81225 zip codes. “We realize home delivery may not be practical,” the letter admits. But “…if not possible we request that residents are provided Post Office boxes without cost.”

The Mt. Crested Butte town council discussed the joint letter during their July 5 meeting, in addition to a second letter coming from just the town of Mt. Crested Butte specifically addressing their issues with not having a separate post office.

Because the town of Mt. Crested Butte encompasses the 81225 zip code, residents are often informed their address is not valid when they order something online and try to enter their physical address. Additionally, tax revenue from online short-term rental sites is often redirected to the town of Crested Butte.