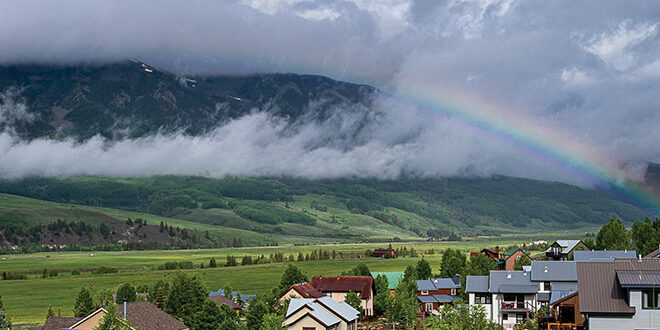 Missing a buzz…finding a balance

A few people mentioned to me this past week that some of my recent editorials have been a little “heavy.” Well, yeah — I’m watching what the Supreme Court is doing to the 14th Amendment and what Donald and his cronies tried to do on January 6. Even up here in the high mountain bubble, freedom, liberty and the attempted theft of a fair election by a former president will matter. But having said that, I agreed that it was time to lighten up or refocus a bit more on the 9,000 feet issues. It was time to try and strike a balance…but it’s not all unicorns and rainbows, even though the rainbows are spectacular these days.

We are in the high time of summer. The trails are going off. The recent early monsoons have made this one of the most lush and beautiful summers in years. Of course, there are some paying the tab as that lushness makes eyes itchy and noses runny. As one of those picking up the tab, I have to say it is worth it.

I mentioned to my wife the other day that while biking I was overwhelmed with the feeling of balance. The temperature was perfect and I was in harmony with the high mountain 73 degrees. The trail was smooth, the wildflower colors brilliant. Getting thwapped by corn lilies lining the singletrack was being awakened with a bamboo cane while riding a Zen koan. I told her that if I died at that moment riding that trail and was fortunate to end up in heaven, I would simply continue to pedal down that trail in the same way I was doing. It was that good. And it has been that good many times over this past week.

Do not forget to get out there and experience the reason we live here. Whether it’s biking, hiking, Alpenglowing — do not forget to embrace the summer. They are short. No matter your schedule, no matter your challenges, get out at least a little bit in these next few weeks. It is the reason you probably came to the valley. Bring it back to your heart. It is going off out there.

One thing not exactly going off is the downtown CB scene. I mean it’s busy, but it doesn’t feel as busy as the previous two ‘pandemic’ summers. One example: On the day after the Fourth I was covering a meeting that ended about 8:15 p.m. I thought about a quick bite but just missed Mikey’s. So I rode uptown. The Noodle was busy. The Stash was open and busy but there were open tables and no slices. Riding the townie to Second Street I noticed that of course the Brick was closed but so was Pita’s, Prime, the Nickel, the Sunflower, the Steep, Montanya’s, the Breadery and the Public House. I forgot to look the other way on Elk and didn’t investigate the busyness of the few other downtown restaurants that were still open. There were literally two people wandering the center of the town’s main business district at 8:30 on a beautiful evening on the Tuesday after the Fourth. It could have been Pitkin. That raised a red flag. The downtown scene matters as much as the trail experience.

Now I have often admitted that I like living in a tourist town. That rubs some people the wrong way, but I enjoy the amenities that come with such a location: a good selection of restaurants, nearby trails, a top flight ski area, art options, a positive buzz of diversity with new people here for a good time. It was the buzz that was missing at that particular moment.

It can’t of course be all about tourism, as the place needs to be able to support an active, vibrant local working community. A balanced tourism economy is much better than a whacked out busy beehive of activity but there is the danger of going too far the other way. Right now I miss being able to saddle up to the tiki bar at the Brick and meet an out-of-towner here for the first time who is awed by the place. Or popping into any number of places to order quick take-out while I have a beer at the bar with locals.

I will continue to advocate that the community needs to find ways to reasonably provide housing for the service workers and make sure they earn a decent wage for CB and are still able to enjoy the reasons they have come here. There are good efforts underway to do that up and down the valley, but it seems some of the new property owners have the means to do it quicker and more nimbly than government entities and they should be. And maybe they are working toward that end but I’m not sure. I know the long running gag of me waiting to hear from billionaire and major valley property owner Mark Walter might be getting old, but if he could share some vision and hope with the community of how he wants to help maintain a vital community scene that benefits everyone, there is an outlet to do so. I would remind him that it probably starts with taking care of the people who work for the properties he owns. Anyway…

As one local gendarme mentioned to me this week, it is still plenty busy but it sure feels less crowded. “Left hand turns seem possible occasionally now,” he noted. Fair. And that is not a bad thing.

Than and Josephine were on the tower to see the crowd at the Fourth of July parade and they both said it seemed thin compared to the last couple years. The food vendors indicated it was slim as well.

At the same time, the Crested Butte poop-o-meter indicates the numbers of people are not totally off. While not entirely accurate given variable circumstances like snow melt and run-off timing, the town’s wastewater flows can be a good indicator of how many people are in town. Of the last four Fourth of July periods (July 3 to July 5), data indicates that 2021 was the slowest in terms of flows into the sewer plant. While 2019 brought in the most wastewater in that time span, this year saw more than 2018 and 2021. I’m not so sure about that data but as the public works director reminded me, “The poop does not lie!” Maybe one of the variables is simply that people here in 2022 are simply full of it?

Then there is the text-o-meter. There have been many times this summer when texts float around in the ether for hours before being delivered and phone calls are dropped because the cell and Internet infrastructure are overloaded.

In that vein, I was reminded by one of the artists who work the Sunday Art Market on Elk Avenue that it can be so crowded at that time, the vendors cannot access the payment systems set up through their phones. And while last year there was an ATM at Mountain Spirits close to the market, that is no longer the case. So the advice was to remind people to come in with cash or even old-school checks. Having to struggle with a customer who wants to spend money in town is no fun for anyone and another damper on the experience. So come prepared when you know it will in fact be busy, and the Farmers/Art Market on Sundays is certainly one of those times.

Look, we are living in “interesting times” both locally and nationally. It can seem overwhelming. So breathe. Scratch your eyes and look up. Blow off another non-productive business meeting and explore the Woods Walk. Connect with the reasons you moved here. That is a huge part of the balance.

Understand too that this community works on visitors. And while maybe it was a one-off, a downtown with more tumbleweeds than tourists will keep people away from CB as much as overcrowded trailheads and not being able to use a credit card in a resort town. It’s all about balance. The Supreme Court feels out of balance. Donald certainly seems unbalanced. That Tuesday evening downtown seemed out of balance. If you are working too hard to enjoy the mid-summer backcountry opportunity that is peaking – that is out of balance. Do what you can to even the scale and I’m guessing that exploring a trail will do nothing but help. Look for and find the sweet summer balance. This is the time.