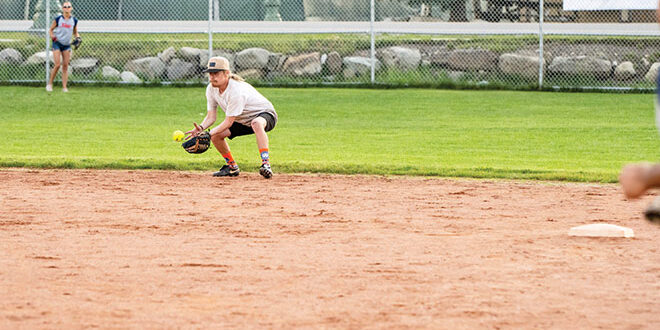 While KBUT reached their goal of $50,000 in their summer pledge drive, their softball team fell short of their goal losing to CB Extreme last week to be eliminated from the playoffs.

KBUT came into the game hot having won their first game that evening to remain in the title hunt in the loser’s bracket. But one thing was strangely missing at their game, music. And it did not go unnoticed that after raising $50,000 they still couldn’t have music playing at their game.

But that was merely a minor detail to the major deal, which was the game.

So, as I was saying, KBUT had just sent Pork Missile packing the game prior and continued their roll against CB Extreme scoring three runs in the top of the first inning. After the first two batters were turned away, Shawn Harrington and Heather Heinz slapped base hits and Phil Dujardin, Nel Burkett and Seth Quigg drove the runs in.

The KBUT defense then held CB Extreme to a lone run and then tacked on three more runs in the top of the second inning off RBI hits from Kat Harrington and Dujardin.

The magic of KBUT slowly but surely started to wear out though as CB Extreme climbed back into the game and then took the lead over the next three innings.

Andrew Tower lit the fire with a leadoff triple, a couple of walks scored one more and then the next two batters fanned the CB Extreme fire as Mick Demi knocked a RBI single and Jess Forbes smashed a two RBI double.

After retiring KBUT 1-2-3 in the top of the third inning, CB Extreme bats remained on fire in the bottom of the third to knock in six more runs.

Frank Stichter started it off crushing a single-walled bat double into the netting for a RBI and scored off a double by Sean Slattery. Tower hustled for a RBI infield single and Heather Cooper and Rhett Yarbrough combined for two base hits and another CB Extreme run. Demi then topped it all off with a two RBI single and CB Extreme was on top 10-6.

KBUT woke back up to score two runs in the top of the fifth off a RBI double from Dujardin and a RBI single by Brett Biebyuck, which apparently is a Flemish name. I would have guessed Dutch. Or, wait, is Dutch Flemish. Or is Flemish Belgium. Ummmm… Belgian waffles. Furthermore, is it Holland or the Netherlands? And what’s up with Brussels and Bruxelles?

“There’re two things I can’t stand in this world. People who are intolerant of other people’s cultures, and the Dutch.”

As I was saying, KBUT was making a comeback, finally got the music going and were back on track at the plate and on defense until the bottom of the sixth when CB Extreme turned up the heat once again.

Drew Stichter slapped an RBI single and Frank continued to have the game of his life with another hit to drive in two more runs. Tower, Cooper and Yarbrough joined forces to drive in three more runs as CB Extreme pulled ahead 18-8 heading into the seventh inning.

KBUT did connect for five more runs in the top of the seventh, including a three-run inside the park home run by Sonny Burgess, but CB Extreme finally turned the final out to seal the 18-13 win.

CB Extreme must now get through the Rainbow Unicorns and the Rent-A-Gades before they can get to the finals to face Pitas OGs on Wednesday, August 17 at 5 p.m. at Gothic Field.

Share
Previous CBMBA overnighter this weekend
Next Water: The Lifeblood of Colorado (Part 3)