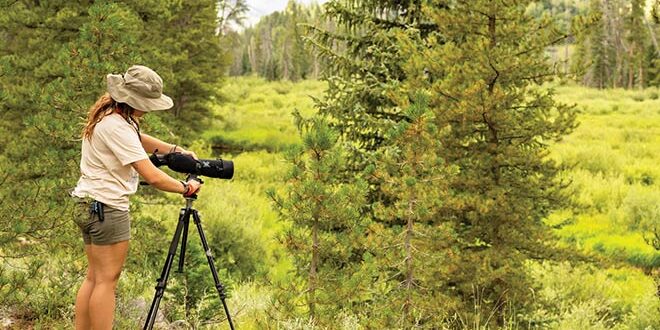 It appears that not all, but most people have avoided floating the Upper Slate River during the time the Great Blue Herons were hatching and raising their young this spring and summer. According to Western Colorado University associate professor of wildlife and conservation biology Pat Magee, the voluntary avoidance of the heron rookery through July 15 was successful and as a result, 38 chicks were counted this summer. The number of floaters, especially stand up paddleboarders (SUPs), using the Upper Slate in the early summer appears to have decreased over the last three years as a result of education and awareness.

While as of this week there was still one active nest with three large and nearly flight-ready chicks, the Great Blue Heron colony is now largely gone for the summer and the voluntary period to avoid that stretch of the Slate ended in mid-July. As of early August, two nests remained active in the “lower colony” area and one of those contained three chicks. Three chicks were also counted in one nest located in the “middle colony” area and all four nests observed in the “upper colony” were done for the season by August 6.

Magee said it appears that two new nests were added to the overall colony in 2022.

“So far, Hadley Nelson and Camryn Uetz — undergraduate research students in Western’s Wildlife and Conservation Biology program — have only seen two river recreation groups pass by the colony,” Magee noted. “Both times the students were not set up yet for data collection, so were not able to quantify the disturbance. Hadley mentioned that at least three herons flushed when she saw the river crafts pass by. I saw the CBLT river steward, Landan Schaller, today as well and he said he has only seen a half a dozen groups this year that floated the upper stretch. It seems like most folks are avoiding floating the upper section of the Slate.”

Magee’s data which won’t be finalized into a report until the end of the year, thus far indicates that the number of total nests and adult herons that stayed there this year were similar to the last three years. The number of total chick however saw a decline with the 38 counted this summer. That compares to 46 in 2021 and 45 in 2020.

Magee said that preliminary data for 2022 indicate we had 18 active nests, but three disappeared, perhaps blown out of the trees in the windy conditions of 2022. “We lost three potential nests before they fledged any young,” he explained. “In the five years of our study, we have never observed active nests being lost mid-season. Inactive nests are routinely raided for precious sticks. Sticks are a valuable resource in heron life and are used not only for nest construction and maintenance, but also for courtship and are exchanged as gifts between males and females.”

Crested Butte Land Trust stewardship manager Peter Horgan said that that the community in general definitely seems to understand the situation and is respecting the no-float period. “The recommendation and request to voluntarily avoid floating the upper stretch of the Slate River past the Great Blue Heron rookery was largely honored during the 2022 floating season,” he said. “We want to express our appreciation to river users for respecting wildlife by waiting until after July 15 to float.”

Horgan said the Land Trust’s conservation ranger, Landan Schaller, engaged with river users at Gunsight Bridge and at the new Slate River Boat Launch in town, collecting river use data that will inform the Slate River Working Group’s ongoing management recommendations and educating river enthusiasts about the community’s effort to protect the herons during their sensitive nesting period.

“Thanks to the community’s willingness to participate in the voluntary no-float period, much of the river use this season was redirected from Gunsight Bridge and Rec Path Bridge toward the Slate River Boat Launch,” Horgan concluded. “That allowed for reduced impacts at the heron rookery upstream and commencement of the Rec Path Bridge River Access and Restoration Project to provide ADA access to the Slate and restore heavily impacted riparian areas.”

CBLT stewardship director Jon Mugglestone said the whole experience is a good reflection on the community. “Community members working together can address complicated problems when everyone is willing to listen to one another, work together and compromise for the greater good,” he said. “I guess everybody already knew that, but the Slate River Working Group has put this theory into practice in a pretty exemplary and practical way.

“I suspect the voluntary no-float through July 15 may be the best compromise the Slate River Working Group can find to protect the herons, while still potentially (depending on annual runoff) accommodating some river recreation on the upper Slate,” Mugglestone continued. “As the SRWG continues its discussions over time, a focus on improvements on the lower Slate to better accommodate river recreation and a focus on ecological restoration on the upper Slate may lead to new recommendations. Of course, the SRWG will keep everybody posted if new recommendations arise.”