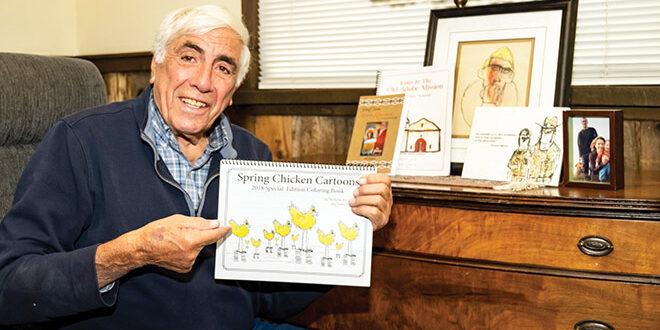 Nick Rayder is a man of many talents and disciplines, drawing from his vast experiences and challenges throughout his lifetime. He offers this thought, some of it paraphrased from Thomas Merton, to all who would seek a more joyous existence, “Appreciate that life is not a problem to solve but a gift to be opened. And remember to do some art. Art enables us to be ourselves and lose ourselves at the same time.” Born in New Jersey, New York was a major influence in his young years, but not solely because he only had to be 18 to drink in N.Y. His high school “gang of guys” would go into the Big Apple have a three-foot pizza and raise hell, he recalls.

While he was still in high school, Nick’s grandparents sent him to barber college in New York’s Bowery to enable him to have an employable skill. “My high school academics were very poor and I ended up flunking out,” he says, but he put his barber license to use, working with his maternal Italian uncles who were all barbers. While he was in the Bowery, Nick spent a lot of time interviewing Bowery bums, many of whom, he determined, were very intelligent. “All the derelicts drank Sneaky Pete, a chemical drink that would sneak up on you and make you feel good. They’d beg on the streets, they’d clean your car windows, and I couldn’t understand how they ended up sleeping on the streets, or why they ended up ruining their lives,” he says, and it intrigued him. “I became interested in psychology.”

Watching his friends graduate from high school traumatized him, and afterwards, Nick was encouraged by both his sister and a teacher to continue his education. He made up the high school class he flunked and enrolled into Lycoming College in Williamsport, Pennsylvania. “I was good in art in college. Every day I was going to the Catholic church to pray for help. College was a transformation both educationally and spiritually. I learned how to learn and had good mentors,” Nick says. He became an honor student, graduating with a degree in psychology and art in 1962. After graduation, he and a friend decided to do an extensive road trip, traveling 11,000 miles in 21 days, through Canada, to the west coast and back to New Jersey.

Having seen the Canadian Rockies, Nick set out to experience the Colorado Rocky Mountains and enrolled at Colorado State University in Fort Collins. He negotiated a research assistantship which paid his way. “I loved it there. We’d raft the Poudre. We were neophytes on the power of nature,” he laughs, “and the river, its beauty, was an eyeopener for me.” Nick received his Masters in Industrial Psychology in 1965, all the while, his art work was blossoming as well.

At that time in 1965, Nick recalls meeting a wonderful student, Janet Sneddon, who would later become his wife. “I was allowed to date her after an interview process by her grandmother,” he smiles. “We decided to continue our education at the University of Northern Colorado in Greeley.” Nick enrolled in a program to become a dean of students, called Student Personnel, inspired by all the mentors he was influenced and helped by. He later changed his major to Evaluation, Measurement and Research Methodology, a stats program that dealt with measuring achievement in students and educational programs, a natural for Nick who confesses that he had a talent in mathematics. He earned a PhD in 1969, which was also the same year he married Janet.

Nick became an assistant professor at Michigan State University, teaching research and sociometric scaling, while also developing a student evaluation of professors program. While he was there, Nick took on the 4H program for inner city kids. “It was a real turnaround in my life working with these children,” which he did for two years.

When a position for director of evaluation for early childhood education became available at the Far West Laboratory in Berkeley, California, they picked up and moved west. “It was a lab to improve the quality of early childhood education, developing good Head Start programs,” he explains. Throughout all this, to keep some sense of balance in his life, Nick continued doing his artwork, and also created a cartoon book.

“My artwork became second nature,” he recalls, as he was traveling across the country, working to reduce the gap between African American kids and white kids, going to different sites, like inner cities, helping to improve the implementation of good educational programs and alternative ways to measure child achievement. Nick also taught stats at UC Berkeley and was later asked to join the faculty in the Math department. Nick was appointed a joint fellowship with the Stanford Research Institute. He spent 15 years in Berkeley before work and life slammed him with a reality check.

Nick confesses that he was a burned-out workaholic by 1982. He was diagnosed with MS and became incapacitated, which he felt was a result of the stress of work and, “Not attending to my health, losing any spiritual component of my life and the importance of my family. I was out there trying to save the inner cities and out there singing Kumbaya with those parents.”

He and Janet divorced in 1983. “It all happened at once, it became intense, the burnout, the MS recurring, I was in bad shape and very depressed. I needed something to shake me out of it. I was really involved in trying to change things but I couldn’t cope with it, and I thought I was going to die,” he says. “I had to do something to get out from under the stress. I was trying to do too much and be someone I wasn’t. I was trying to change things that couldn’t be changed.” When he finally decided to seek help, Nick found a holistic medical program in the San Francisco Bay Area, and began extensive counseling along with changing his health patterns, taking vitamins and homeopathic treatments. He moved out of Berkeley to Crested Butte.

He had visited Crested Butte in 1980 since Janet’s parents were in Gunnison. “It was suggested that I not go to CB because there were too many hippies there,” but in reality he discovered, “I found people just like me.” He learned of AMAX and its proposed mine. “One part of me is always making an effort to help out disenfranchised groups of people or programs that would improve our lives,” he took on the AMAX fight, raising over $15,000 to pay lawyer Wes Light to keep AMAX in the courts until the price of Molybdenum dropped, “Which stopped them temporarily.”

Nick bought a house in town and he started getting healthier and feeling better. He even began chopping his own wood. He had traveled to the monastery in Snowmass, where he found mentors who helped him with his life and editing his book on life planning, The Leap of Faith, the Dance of Change, co-authored by Sandy Fails, which is based on the writings of Thomas Merton, who, he tells, was a maverick priest. In his sojourn back to health and spirituality, Nick returned to the Catholic church, where he paired up with Frank Orazum, “He became my spiritual father,” and later, Nick became a Eucharistic minister at the church. “I had immersed myself in Crested Butte, volunteering to drive the senior van, getting to know all the seniors and all their stories. They became my family.” He volunteered for Adaptive Sports. “One of the most dramatic experiences was going up on the lift blindfolded,” he says.

Nick taught some classes in early childhood at Western State College (WSC, now Western Colorado University) and applied his consulting skills for various organizations. He was the consultant facilitator of the group who came up with a new mission statement for WSC.

Around 1986, Nick tells, “Edward Callaway asked me to conduct a survey to look at whether it was viable to have a high school in CB, since the students were being bussed to Gunnison.” He hired Mike Miller help him do the survey, and instead of just presenting a report of the data to the school board, they decided to do a survey theater. “I would present the data against and Mike would present in favor of, like a court-like setting. It was an innovative way to present the data and they voted unanimously to build the school.”

In 2009, Nick came up with a new idea to help locals in need. “I would bring coffee to the Mexican men sitting outside of Ace Hardware,” which led Jim Miller and Nick to design a program to help them get clothing and shoes. That was the birth of Saint Mary’s Garage, the unique “thrift shop” staffed by volunteers and where everything is free. “The new owners who bought the building on 6th Street, gave it to us to use. We had to clean it up a lot. It was a small closet, but it blossomed and the women’s group at the church took it on. Other congregations began volunteering and sending over clothes and it became part of the ethic and fabric of CB, of sharing and taking care of each other. We have so much there that we outsource the items to other communities, in Denver, Grand Junction and other parts of the world. We’ve had clothing taken to Pakistan and India,” he says.

Currently, Nick is working on his autobiography, and all of his publications can be downloaded for free from his website nicholasrayder.com. “Crested Butte is a beautiful place to be. It’s an important part of my life and it will always be. I have old friends and now new friends, all wonderful, incredible people.”

When asked what Crested Butte should do in this time of big changes, he says, “Embrace the newcomers, encourage them and show them of how to become part of the Crested Butte ethic of caring for our kids and helping each other. And I want to encourage people to just keep going.”