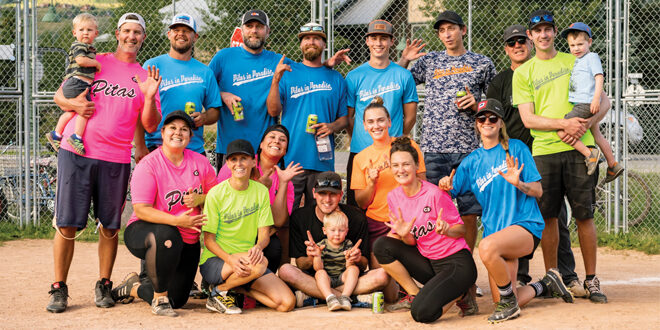 I’m not going to say it was a bad game, it just wasn’t the most enthusiastic championship game I’ve ever seen. Almost makes me wish the Psycho Rocks were back in the mix.

Still, there is something to be said for the Pitas Meatsticks dynasty. I mean when they lined up for their team photo after the title win Tuesday night at Gothic Field, they couldn’t even signal how many titles they have on one hand because they have so many, six to be exact, aka a six-pack. Or is it a Meat-pack.

In addition, it wasn’t that there weren’t any defensive highlight reel worthy plays or big bats, it’s just that neither team seemed that excited when something awesome happened.

Can I at least get one effing Ric Flair?!

“To be the man, you gotta beat the man.”

And, if there’s one thing Elevate may have learned in the story arc of their franchise, it’s one thing to get to the top, it’s another to stay there and the stress of being the hunted eventually took its toll on the Elevate team with a series of injuries throughout the season.

They got off to a solid start in the championship game scoring four runs in the top of the first as everyone seemed to be doing what they were meant to do.

After CJ Hoover, who missed most of the season with an injury, walked, Sophia Gonzales drove his pinch runner home with a single. Sam Reaman then pushed a single to right field and scored off a single from Hannah Crofut and Matt Savard returned to action to crush a two-run home run to straightaway centerfield.

The Elevate defense held Pitas to a single run and then returned to the plate to build on their early success. Only, Pitas’ defense had other plans and when Rhett Yarbrough made a leaping grab smashing into the fence to rob Hoover of an extra base hit, things already started to look gloomy for Elevate.

Yarbrough’s effort helped spark some Pitas offense as they knocked in six runs in the bottom of the second inning. Emily Crooks, Thomas McLean and Heather Cooper all hit singles to load the bases and Bryan Densmore knocked two of them in with a single as well. Scott Sanders scored another Pita with a double and Yarbrough and Drew Stichter each cracked RBI hits to put Pitas up 7-4.

Elevate got back to doing what they do best, base hits and smart running but Pitas’ defense did more soul-crushing damage as Heather Duryea made a leaping grab at second to deny Christian Allen a RBI hit and retire the side.

A two-run shot from Densmore kept tightening the grip on the title for Pitas but Elevate still had some punch left in them with some solid defense of their own. Mallory Zimmerman grounded to second, Liz Wigginton scooped and fired to first for the out only to have Hoover then fire the ball to Crofut at third to tag out Sanders for the inning-ending double play.

Sanders did the same thing as Duryea at shortstop though to hold Elevate’s enthusiasm in check. Hoover did drive a run in with a double but that was it and Pitas continued their consistent ways at the plate to score four more runs including a three-run home run from Stichter to pull ahead 14-6 heading into the fifth inning.

Still, it was only eight runs but with Pitas’ defense playing the way they were, it was going to take a Herculean effort by Elevate to mount a comeback.

Which never materialized as their bats remained silent playing through the fifth and sixth inning without a single hit while Pitas added three more runs off a double from Duryea and a single by Stichter to eventually seal their sixth title in the franchise’s existence.