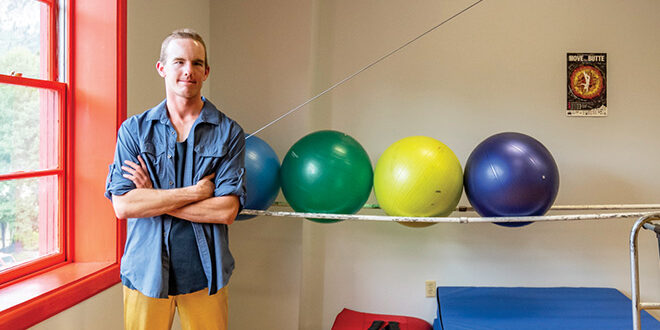 You’ll find Barron Farnell in his studio working up new choreography, dance exercise routines and dancing around town with a big smile. He’s the longest reigning Soul King in KBUT’s history of crowning the funkiest, danciest, grooviest King and Queen during their annual Disco Inferno rager, since he was dubbed royalty in 2019. When COVID canceled the event in 2020 and 2021, he remained the King for those years. Although he’s been in Colorado most of his life, Barron started out in South Florida.

He says that his family lived on the east coast of the Sunshine State quite a bit when he was growing up. “It was difficult in a lot of ways because I wasn’t used to the big city environment and my entire family didn’t like the humidity,” he says of the Florida climate. “I couldn’t stay outside for more than five minutes.” School was rather a mediocre affair for Barron, and it wasn’t a place he particularly enjoyed. “I did have a small group of friends but just not as much as I had when I moved up here to Crested Butte. In Florida, I didn’t like half my teachers at all, they drove me crazy,” he laughs. After school, Barron would go home to indulge in watching movies like, “Lord of the Rings, and Harry Potter,” he says of his favorites. However, he adds, “We had a tradition, we wouldn’t see the movies until we read the books,” as his parents had insisted. “Every night we’d just read out loud to each other.”

Barron tells that when he was born, the doctors told his parents, Crockett and Bonnie Farnell, that he might never be able to speak or walk. “And my mom wasn’t having that,” he says. “She created these fun exercises to teach me how to walk and speak,” She also homeschooled Barron from an early age. “I was a late bloomer. I didn’t start walking until I was older, like three or four years old.”

The family moved to Crested Butte in 2005, when Barron was 12. His dad started coming out here as a kid and by the time both parents graduated college, they were enjoying CB visits. Afterward, when the boys were older, they’d bring Barron and his brother Quinn along. “We all immediately loved it,” he says. “The change for me when we moved was definitely a relief. I was glad to get the hell out of Florida, as I think all of us were. After a week here, I already felt so comfortable and knew so many people. The cultural changes were a great switch for me, it changed me physically and mentally,” he explains. “In Florida, I never really wanted to exercise or do anything. It was hard, it was too hot. The only thing I miss about Florida is Disney,” he grins. “In CB, I love to be outside. When we first started visiting in the winter, I started snowboarding with Adaptive Sports. When we moved out here, I was still boarding with them.” In the summers, the family would go camping, hiking and rock climbing.

School in CB was amazing for Barron. “The best school I’ve ever been to,” he declares. “I was becoming friends with everyone in school and the teachers were really cool. It was my first time joining a team. I played soccer, basketball, and during my senior year I ran track and field. Beforehand, I hated running but once I got better at it, I enjoyed it more.” Throughout high school, Barron had the variety of jobs most Buttian youngsters had, dog sitting and walking, working as a busboy at McGill’s, pulling weeds for the town, working at the Flying Petito Sisters video store and generally, “Working my butt off doing everything I could.”

From the time he was five years old, Barron knew he wanted to be an actor. He had been in some school theater productions in Florida but was given more opportunity through CB Mountain Theatre’s Teens On Stage program in seventh grade. After high school, Barron became intrigued with dance as well, performing in Move the Butte in 2010. “I really loved it. I knew I had an interest in dance also but at first it was hard to find dance lessons in town that were for beginners and not advanced,” he says. Move the Butte gave him the chance to take dance classes and when he met Sasha Chudacoff he started taking hip hop classes. “She was one of the first to encourage me to not only dance but to choreograph. The main person who got me to choreograph was Annie Pyron,” he says of the teacher. “But she moved, so I wound up getting help from another dancer friend for Move the Butte.”

After high school graduation in 2010, he attended the University of New Mexico at Roswell but unfortunately Barron’s main passion, acting and dance, was not in the curriculum. There was no theater program, but they did have a veterinary technician program that interested him. “I didn’t like college life, but on the other hand, it helped me grow as a person. After one year though, I was done. New Mexico reminded me too much of Florida, it was flat and dry and the water tasted bad. It was a one-year program. After that I graduated with my Vet Tech certification and was happy to leave.”

He returned to Crested Butte and eventually became involved in the Six Points system. He rented an apartment in Gunnison and started work at City Market, where he’s still employed. He was even the CBMR Bubba Bear for several years. “It was a lot of fun. It was like acting. I don’t know any other Bubba Bear who did splits in a costume,” he says proudly.

His love of dance led him to teach it as well. “I’ve grown to love teaching. My mom suggested I become a Zumba instructor,” he tells, so off he went to Boulder to enroll in a session to learn all the different styles of dancing and how to teach them. As a certified Zumba instructor, Barron began teaching his own classes in 2020 at Western Colorado University, in Crested Butte and at other Gunnison venues. To claim the title of Zumba instructor, Barron was required to pay the corporation $50 monthly — that’s when his friends convinced him to do his own thing since he had all the experience backing him. When COVID hit, he’d teach outdoors and in Zoom meetings.

“Currently, this summer, I’m teaching with Crested Butte School of Dance, Fridays at 5:15 at the Pump Room in CB,” he says of “Dancersize with Barron.”

“I’m still trying to follow my dreams as far as being an actor and dancer,” he says enthusiastically. “I’ve been auditioning for stuff and posting videos on YouTube. I want to be the next Patrick Swayze. I’m still doing theater, at least one or two plays if I can.” So far, he’s won four CBMT Golden Marmots. These summer days, you can also find him outside of his dance studio, scanning lift passes on the mountain.

Barron acknowledges that he looks like he’s still a teenager which, the 30-year-old says, he doesn’t mind if men think he looks younger but as far as women thinking he’s too young, “That sucks because I’m trying to date and they think I’m a kid.” He gestures to his face and quips, “look at the hair on my upper lip, that’s man hair!”

“Crested Butte, the Gunnison Valley and the people definitely had a huge part in making me the person I am today and I just love everybody here. I’m hopeful that I’m still doing enough to repay everything that everybody’s given me. I’m grateful to my mom and dad for bringing me out here,” he says.