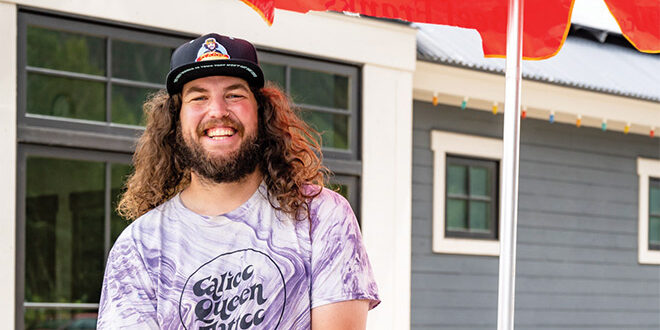 He stands on the sidewalk in sunshine, rain or horizontally blowing snow, the aroma of hotdogs and fixins’ wafting into the day from his wiener cart, conjuring memories of ballgames and summer cookouts. For more than 111 Saturdays, Logan Uhlenhake hands out free hotdogs to feed the multitudes of locals, who always know where the free grub is, and surprised visitors who have never experienced something for nothing and the generosity of a small-town vendor.

He’s always been an entrepeneur; as a child he loved running lemonade stands. “That’s where it all started. My best friend and I ran the stands. I was like six,” he recalls. Then, from the young age of 12, he started his own landscaping business. “I mowed lawns, weeded, raked leaves and did snow removal. I started out with a push mower and then we went down to my father’s family in Iowa and ‘Frankensteined’ two riding mowers together,” he says of combining the parts of both machines to make one working one. “I did that until I was 16 to save for my first car,” and his parents matched any earnings he made. “I’ve always enjoyed working for myself.”

Logan claims he’s a Midwestern boy, born in Iowa but grew up in Chanhassen, Minnesota, a suburb just outside of the Twin Cities. “That’s where I spent all my formative years from three years old to 27.” He enjoyed school and its activities. “School had dinner theater and field trips, some of my favorite things,” but he also tells, “I was more of a sports guy – baseball, football and golf. I still play golf, it’s one of my favorite things to do on this planet. My maternal grandfather was a club smith, he’s actually made me four sets of clubs. He’d made clubs for our whole family.”

In high school, Logan was the VP of their business club. “We’d do full breakdowns of local businesses, full business plans and competitions, presentations at nationals and state. It got me totally stoked for business.” He graduated in 2008 and with his path set for business marketing in college, he enrolled at Minnesota State University at Mankato, which he laughs about because, “The college was not business-related at all.” But he knew there were other ways to make money than by getting a degree.

In 2012, he walked into a startup brewery just down the road in Victoria, Minnesota, and introduced himself. “Hi, my name is Logan and I love everything about beer and I want to work for you,” he said and they told him to come in the next day. “It was Enki Brewing. I wanted to be a part of that and that set me on my journey into the beer industry.” He worked there for three years as brand ambassador. “I’d promote their product, going to events to introduce the beer and get our name out there. I’d just smile and serve beer. I absolutely loved it. I was assisting with brewing and delivering kegs so that the person brewing the beer could just keep on making badass beer.” But he felt the need to grow further, “I felt that I had moved through my time there,” so he left in 2015 and applied to one of his all-time favorite breweries.

Steel Toe Brewing in St. Louis Park, Minnesota, he says, was an homage to the hard-working people who had to wear steel boots every day. “I was a lot of different things there and doing a lot of the same things I was doing at the other brewery. I moved into head of wholesale and distribution for 100-plus restaurants and 100-plus liquor stores. It was a lot of accounts and a lot of work, but I got to see what a home-grown business can aspire to.” Logan remained with Steel Toe for three years and then, “I left in 2018 and came straight to Crested Butte.”

It was the 2018 Super Bowl, which essentially shut down the Twin Cities, and Logan decided to bolt as far as possible from madness, so he hopped in his car in January and headed out to see his long-time childhood buddies, Andy Ellwein and Connor Coughlin, who happened to be living in CB, and, to snowboard, of course. He’s been snowboarding since sixth grade and had been to Colorado in eighth grade. “The first time I saw mountains I knew I had to be out here,” he realized.

Coming up the valley, Logan remembers his awe, “I saw Round Mountain, thinking it was so cool, and then we came around the bend and CB came into view and I felt totally at home. It was a comforting and cool feeling; it feels so back there.”

Logan hung out, chilled and, “Did a bunch of skiing that week. It was our last day there and I just remember falling in love with the town.” He had brought beer from Steel Toe to give to the Eldo Brewery. “I introduced myself to the owner and gave them the beer. It was their second day owning the business.” The owner offered him a job on the spot and even though it was less than what he was making at Steel Toe, he was ready to move to Crested Butte. “I knew this was a way to the mountains and I was really ready for change.” Seventeen days later he became local. “One of my first days here, I said to Andy, this town needs a hot dog cart and he said, good luck getting a permit, there are only four in town and a girl already owns the hot dog stand.’ I just laughed and said, watch me. I needed that little challenge, even if sometimes it takes a lot of work.”

The Eldo wasn’t moving toward distribution, which was Logan’s forte in the beer industry, so he became a budtender for SOMA, moved into being a manager and later a certified extraction tech, making all their concentrates. He was also working at the Wine House, “Living the Buttian lifestyle, skiing all day and selling beer and weed. It’s like the life force of CB,” he grins.

It was the last day of the 2019 ski season and Logan had just met Emily Montesinos at Dead Head Ed’s Eldo Show, “We totally hit it off and we ended up skiing naked together down from Uley’s Cabin past the Flauschink Royalty and on down to the base and now it’s three and a half years later and we have a beautiful 1-year-old son, Teddy. He was named after my grandmother Theodora but everyone called her Teddy.”

Later that week, after the lifts grinded to a halt, Logan and his buddies were having beers out on the porch at Pita’s when serendipitously, “The gal who ran the hot dog stand, Mariah, says that she’s about to leave town and stressed because she has to sell her stand, and her friend was coming to look at it at 5 p.m. I bought her a drink and said, call me at 5:02 when your friend declines your offer. I felt like I was exactly where I was supposed to be in the universe. She called me at 4:47 and said her friend just bailed.”

That was April 9 and for the next three months Logan spent day in and day out getting everything together, the correct permits, talking to the health inspector and all the appropriate authorities. “Everyone wants a piece of the pie once they know you’ve baked a pie,” he says of all the government agencies. “Town was the easiest and nicest of them all, because we live in a beautiful community and I had never done this and I was kind of on my own.”

By July 2, he had gotten his food inspection and jumped right into the fire on July 4, 2019. He sold out. “My family came in, and Emily made shirts of a hotdog walking with my face on it. On the back was written, ‘Ask me about my wiener.’” His slogan now is “The only wiener in town that won’t let you down,” and he uses only Hebrew National all beef, kosher dogs and Harvest Moon buns. There are condiments galore, “For the classic I do ketchup, mustard, mayo and relish but you can also get a Spicy Puppy with Maple syrup and serrano hot sauce.” His “Cheese Wizard” aka the “Wizzy Glizzy” with Cheese Whiz and bacon bits is also on the menu and lastly, the Canadian Tuxedo with maple syrup and bacon bits, which he developed for the 4/20 Carnival celebration at the I Bar. He also has veggie dogs, which are jumbo plant-based smart dogs for all the veg-heads.

Logan says he enjoys schlepping his cart to all the summer events as well. “I do Alpenglow and my stand is like a totally safe place for all people if you want to just hang or need a hug.” His “Free the Wiener” Saturdays are sponsored. “I get sponsorships every Saturday and I give away 100 dogs and 10 veggie dogs, and soda pop, chips and a real good time. Sponsorships come from people all over – the community, local businesses, and out-of-towners.” He‘ll be slinging dogs for the hungry mobs at the Crested Butte Art Festival this weekend, August 5 through 7.

As for living in Crested Butte, Logan feels, “It’s still a beautiful place and the love is still freely given but I’ve watched it change so much. I watched Mother Nature not be the top priority to respect. I think it’s reminiscent of our country right now and not respecting mother, as in earth and mother womb. I think Mother Nature should be a top priority. I think there’s a battlefield, to keep this place weird. I don’t think that leaving is the right choice, this place is worth fighting for and it just needs to be respected more.”

What keeps him here, he says, “Is the core group of locals who can always put a smile on your face. There is so much happiness. It’s always lovely to see those people and know that we’re all here for a reason. One of the first things I ever heard when I first got here was, if the Butte likes you, she’ll keep you around.”