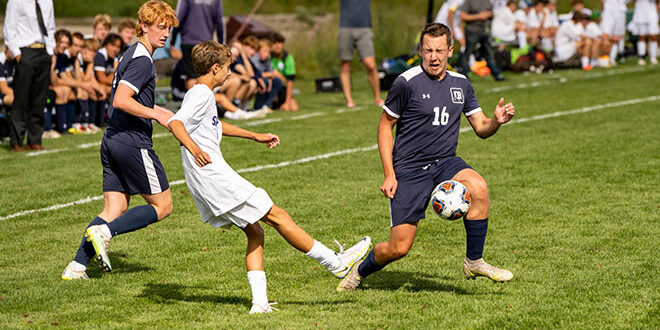 “It just seemed smoother, and I think our strikers started getting a little more hungry”

It took some time but once the Crested Butte Titans boys soccer team started turning their possession game into goals, they connected for four goals in the second half to cruise to a 6-1 win over the Salida Spartans on Tuesday, August 30.

Salida has been a non-league 3A challenge for the Titans for years and the Titans expected the same once again.

But when the two teams took to the field, the Titans had a noticeable advantage and started to take control of the pace and possession early in the first half. Their work paid off 10 minutes into the game when consistent pressure in the attacking third eventually prevailed as Brendan Hartigan slipped a pass across the top of the penalty area and Matlock drove a shot to the low corner for a 1-0 lead.

Things then got quiet on the Titans side. While they still maintained the upper hand in possession and attacking chances, they failed to put the finishing touch on their effort until the 28th minute. Another low shot to the corner by Matlock was denied by the Salida keeper but Blue Gardner followed to blast the rebound in for a 2-0 Titans’ lead.

The game slowed considerably though as the Titans started to sputter and the team’s shape was a bit askew on the back line. The Spartans capitalized on it with a goal in the 33rd minute to cut the Titans lead in half.

“I think we had a synapse breakdown, and the final connecting piece wasn’t there,” says coach Bob Piccaro. “We slowed to their pace. We also need to get more from our bench, more intensity to keep the game at a certain level.”

“We seemed to lay off the gas a little and stopped working the ball quickly out of the back and through the midfield,” adds Matlock.

Adjustments were made on the back line and the Titans speed and size soon started to wear the Spartans down in the second half. Crested Butte added a third goal six minutes into the second half as Jacob Bernholtz got on the end of a cross from Gardner to head the ball home.

“That goal was crucial,” says Matlock. “It gave us a cushion and I think it boosted us up.”

Crested Butte continued to set the tone and pace of the game, they but were stalling in the final third once again. Fortunately, with a better organized back line, Salida had nothing to work with on offense and the Titans held the ball in their half a majority of the time.

That relentless pressure ultimately opened a late game scoring run as Crested Butte rattled off three more goals in the final 10 minutes of the game. A string of quick passes from side to side in the attacking third opened the middle up and Gardner found Matlock open in front of the Salida goal and Matlock netted his second goal of the game. Two minutes later, more quick passing opened another seam through the Salida defense and Nathan Sawyer slotted a pass to Matlock for him to finish off his hat trick. Bernholtz then capped off the run taking a pass from Kaiden Marziano to tuck it past the Salida keeper to finish off the 6-1 win.

“We had better passing, a quicker touch and were connecting better,” says Piccaro. “It just seemed smoother, and I think our strikers started getting a little more hungry.”

The Titans hit the road this weekend for their first league game of the season against Caprock Academy. They remain on the road next week when they take on non-league Vail Mountain Tuesday, September 6.

Share
Previous Back to school comes mask-free and with fewer students
Next Profile: Hailey Loeffler