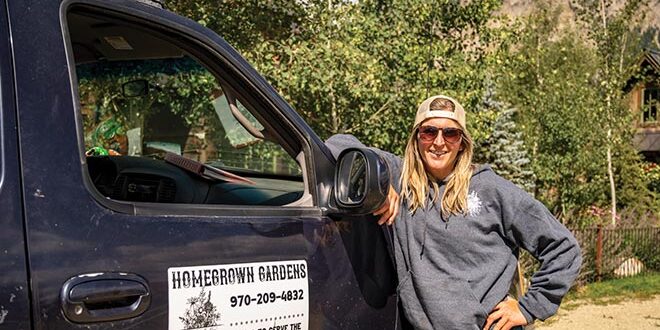 Born in the southernmost hospital in the U.S., Hailey Loeffler spent the first two-and-a-half years of her life in Key West with her parents Holt Loeffler and Patti Kaech, along with her brother Ian, until, she tells, they bought a sailboat, sold their beach house and businesses and went on a grand cruising adventure. Even though her parents had never done open water sailing, Hailey notes, “The nice thing about sailing was you meet up with other families and do crossings together so it was this nice little community.” During their year at sea, the family sailed to the Bahamas, Virgin Islands and Granada, ending up in Venezuela where they sold the boat.

The family then flew home to Florida, with the intention of heading to Steamboat Springs where Hailey had an aunt and uncle who talked them into coming to Colorado in 1996. “We bought a car and a janky trailer, packed it full of stuff and drove from Florida to Colorado,” she recalls, but their plans changed in Buena Vista when a random stranger at the gas station mentioned they should check out Crested Butte. The intrepid family took that detour over Cottonwood Pass. “We stopped at the Bakery Cafe and met some people who invited my parents on a bike ride and that sealed the deal. We never left and never made it to Steamboat,” she laughs.

Hailey attended Stepping Stones preschool and then kindergarten the following year. There were dirt streets and those notorious potholes on Maroon, all of which were her puddle playgrounds. In the winters, Hailey would snowmobile after they got home from school. “Dad would pull us on sleds and whip us around the roads up at Meridian Lake where we lived. We learned to ski right away. When I was four-and-a-half, I got lessons from Sherrie Vandervoort,” she remembers, and although she was behind in her downhill ability because all the other local kids were skiing before they could walk, Hailey soon caught up. “At first, I was the only one who had edgy-wedgies,” she describes the small rubber bands put on the tips of beginning kids’ skis, “but it didn’t take me long to get rid of those.”

With her parents working, Hailey had the typical Buttian wildchild freedom. “We had free reign. We’d ride our bikes out Peanut and jump into the Slate where there was a deep pool. We’d just bike around and if I needed to use the phone, I’d go into the Brick Oven to use their phone. I had the typical feral CB childhood,” she smiles.

Hailey recalls how awesome high school was for her here. “I graduated with 20 kids – 10 boys, 10 girls. Barron Farnell (see his profile in the August 18 issue) was my Junior Prom date. I didn’t date too much because I’d known these kids since they were pissing their pants in preschool,” she laughs. “We had a group of about five girls and we’d all ski together. After the CB Academy moved away, CBCS started the Mountain Sports team as an after-school program. We’d get early release one day a week and then we’d ski all weekend, competitions, mostly Extreme and Big Mountain comps.” She graduated in 2010.

Hailey had won the National Junior Extremes in her senior year and decided to take a gap year to ski and compete. She was working at Butte and Co, teaching dance, the latter since her junior year. It was during her time at Jackson Hole, after falls and stress fractures, that Hailey says she lost her passion to compete and she set out to attend Humboldt State in California, majoring in dance. “They had a huge Latin Dance scene in the community. You’d go to these old hotels to dance,” she says of her one semester there, because she couldn’t find work. “Plus,” she notes, “it’s hard to move somewhere else when you come from Crested Butte. Everything else pales in comparison.”

Hailey transferred to Western State College (now Western Colorado University) where she finished her degree in environmental studies with a minor in English. “Environmental studies was depressing because you’re thinking you want to save the world, or at least make it better, but every time I left class I felt it was hopeless. We’d talk about all these horrible things like climate change, but it wasn’t very solution based.”

She met Carl Rickey in college and they decided to save up for a trip to Bali, afterwards moving in together in Delray Beach, Florida, she says, “To try something new and get tropical and sweat some.” After a short relationship and the too-hot weather, Hailey returned to CB. She discovered she was pregnant with her daughter Rowan, who came along in November of 2016. Hailey worked at Rumors Coffee and Tea House throughout her pregnancy, as she had in high school and all through college. She had already gotten her real estate license. After Rowan was born, she continued her barista stint and sold a few houses but she confesses, “I saw that Crested Butte was changing and I didn’t have it in me to sell out CB by selling homes.”

Hailey began working for her dad’s landscaping business, and her stepmom, Kelly Dean, gave Hailey a few of her garden clients to maintain. “They sold their business and then I got in with a property manager and gained 30 more gardens my first year.” She created her own business, Homegrown Gardens, and by her second year Hailey had 70 gardens to maintain. Her third year in business increased her clients even more and now included lawns and irrigation in addition to gardens.

With all the work, Hailey took on a business partner, Emily Jones. They built a greenhouse to create hanging baskets for local clients. “We both do everything,” she says, and adds, “I thought everything would be easier with a partner but we doubled the work. We’re maxed out with 100 clients, and we have a shortage of employees and everyone’s burnt out because it’s so much work. It never ends – we work seven days a week during May, June and part of July. Once our greenhouse is empty, we can take some time off. The greenhouse was sold out before the snow melted,” she laughs.

In her first year, they had planted 150 baskets plus annuals and perennials. “All from seed, and we stuffed our greenhouse. We had a humidity issue because at -20 degrees with a soaking wet greenhouse, there’s no way to dry it out without it getting too cold. This year we didn’t do as many baskets, only about 70, so they could have more airspace and room to grow, so it was much better.” She notes that they’re the only local suppliers of hanging flower baskets, grown in the valley. She’s thankful despite the work it entails. “I’m surrounded by plants,” she smiles.

During her time off, Hailey is an ultra-runner of long and hard races, “That’s what I do with my free time when I’m not working or raising children. I do the local races or go to Moab. We have a good running community in CB that’s fun to be a part of.” She does the Grand Traverse, “I’ve done the ski a few times with a friend,” she says, and plans on doing the triple crown of running, biking and skiing after the baby is born. “I met Josh McEwen in 2019 at a friend’s wedding,” she smiles, and they hit it off, “He came over and basically never left.” The couple bought a Gunnison house and are expecting a baby boy in January of 2023.

“For now, we can’t think of another place we’d rather be, and where do you go? We bitch and moan about Crested Butte but what’s the alternative? It’s easy to complain,” she says of the changes in town, “but when you take a step back it’s still pretty good. I’ve lived here my whole life and there are still places I haven’t explored here yet. I love Gunnison, it’s nice to have a little separation between work and home. It’s a beautiful commute and when it’s a little too crazy, I get to leave at the end of the day and go back to my dirt road up at Cranor Hill where there are families and kids. Rowan plays outside until dark with the neighbor kids. It’s very reminiscent of my childhood at Meridian Lake, there are pockets left of that same vibe.”