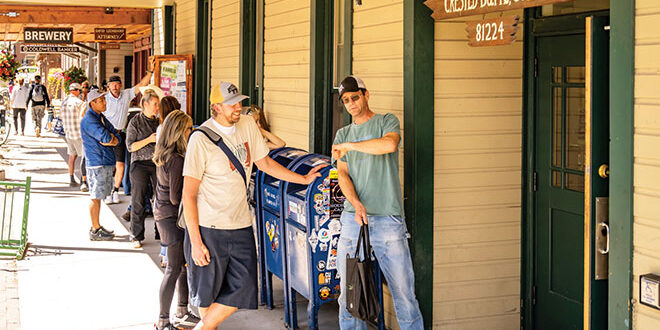 CB continuing to look for ways to alleviate the lines

The town of Crested Butte is continuing to search for ways to help alleviate what can honestly be described as the Crested Butte Post Office cluster. A series of circumstances including being short-staffed and working in a space that is too small for the volume that comes from a growing community has resulted in regular long lines of people waiting outside the post office for literally hours to get their packages or conduct regular retail services provided by the post office.

Town manager Dara MacDonald is searching for solutions but was recently rebuffed when she asked the U.S. Post Office about its contract with Amazon.

In what may be a speed record for a USPS response, it took less than a day for MacDonald to be told she would not be given information based on a Freedom of Information Act (FOIA) request she filed. MacDonald had asked to see “a copy of the national agreement with Amazon for last mile delivery.”

She sent the request August 22 and the privacy and record management office of the USPS had a response to her dated August 23 that included the definitive statement that “in response to your FOIA, your request is denied. While you may have been informed that there is an agreement between the USPS and Amazon to deliver last mile delivery, we cannot confirm nor deny an agreement exists.”

MacDonald said it is obvious that the shift to the USPS handling so-called “last mile delivery” for Amazon in approximately 2017 has caused an overwhelming increase in parcel volume in the Crested Butte post office which is not equipped to handle the influx.

“The physical space has no parcel lockers and every package must be handed across the counter by hand. While not all parcels come from Amazon, a change in last mile delivery from that vendor alone would likely have some relief for postal staff and customers,” she said. “Surely this is an unintended consequence of the agreement between Amazon and USPS. While most customers in the United States receive home delivery or can utilize a parcel locker, we are left with long lines for basic delivery services. We have been told on multiple occasions by USPS staff that there is nothing that can be done to change package delivery in our area, that ‘it is a national contract and cannot be changed.’

“Rather than accept the USPS staff interpretation of the arrangements with Amazon, I requested the contract so we could review it ourselves and see what possible ways there may be to alter or amend the agreement,” said MacDonald.

The Post Office denial response written by Sr. Government Information Specialist Marthea Hodge stated that while agencies are required to produce records with such a FOIA request, there are certain exemptions. The USPS cited a federal code that states “Financial information in or the identities of parties to Negotiated Service Agreements or Package Incentive Agreements will not be disclosed…Acknowledging the existence of a specific Negotiated Service Agreement (NSA) would cause harm and is confidential commercial information that would not be disclosed under good business practice. As a result, the Postal Service declines to conduct a search for the records requested or to perform any analysis to identify or segregate portions of alleged records.”

It was made clear by Hodge that unlike other federal government agencies, the USPS receives no tax dollars for payment of operating expenses, “and instead must fund its operations through revenue it receives from its customers for the sale of both competitive and noncompetitive postage, products and services.”

MacDonald said that while there are multiple challenges facing the CB post office — short staffing, space constraints, volume of mail and parcels — providing relief in one area will help with the others. “If we can find a way to reduce the volume of parcels being handed off from other carriers like UPS, that will give staff more time for other tasks, reduce wait times for counter service and provide a little relief on the space constraints,” she said. “I am working with staff from Senator Bennet’s office to pursue short-term solutions for parcel delivery such as a temporary parcel locker location in town. I have also begun efforts again to communicate our concerns directly with Amazon.”

When the town, along with 10 other Western Slope communities with representatives of both Colorado senators and Congressional representatives, began making the USPS aware of staffing shortages in the spring of 2022, MacDonald said “the USPS increased the pay rate and benefits for several locations in Colorado, including Crested Butte. However, even these measures do not appear to have proved sufficient for several communities including ours.”

It is possible for the town to file an administrative appeal of the denial decision within 90 days. MacDonald said town is reviewing the options on how to proceed.

In related news, the facility relocation process that started when the USPS received word its lease would not be renewed is continuing. “It is a slow but steadily moving process,” explained MacDonald. “We are continuing to work collaboratively with the USPS and staff from Mt. Crested Butte and remain hopeful that a long-term solution will include a postal facility in Mt. Crested Butte and expanded facilities in CB South in addition to an improved facility in town.”