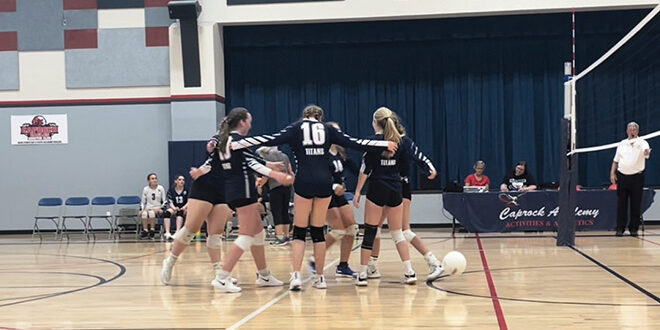 “They’re getting better game by game”

After winning two of three matches at their opening home tournament, the Crested Butte Titans got tested with some tough matches this past week and, despite falling in all three matches, the young team stepped up and continued to take massive steps forward.

“We’re playing with a lot of players without a lot of experience but they’re getting better game by game,” says coach Sheri Covey.

They opened the three-match set on Tuesday, August 23 against the Sargent Farmers, a stout opponent every year.

“Back when we were coaching before, they were a known force,” says Covey.

This time around the Titans either battled to get ahead in each of the three sets or climbed back into the set but still fell short losing 25-19, 25-19, 25-21.

“I thought they played better than in the matches before, but we just don’t have the capacity to seal the deal,” says Covey.

They returned to workouts the rest of the week as they prepared for a tournament in Grand Junction where they would meet Caprock Academy, Ridgway and Norwood. Caprock is a growing force in the 2A ranks and while the Titans were noticeably outmatched, they still raised their game another notch to battle with Caprock eventually falling in straight sets 25-12, 25-17, 25-16.

“Caprock is a strong hitting, true volleyball team,” says Covey. “But we played way better than I thought we would. Caprock made us step up and play a much faster game.”

The Titans rebounded to battle the Ridgway Demons pushing the match to five sets before falling in the end. They closed the three-match day against Norwood and after taking a 2-0 lead, they dropped the third set and couldn’t recover to eventually fall to Norwood as well. Ellie Duryea and Mandala Covey-Bleiberg each recorded eight kills in the final match and Paige Stewart had a nine-point service run during the day.

“Once we started losing, we couldn’t get our feet underneath us again,” says Covey. “Still, they played better that whole day.”

Despite the string of losses, there is no need for panic and Covey sees the team starting to understand what both she and coach Marla Covey are asking of them.

“We struggle with accurate passing and mental mistakes but that’ll get better as the season continues,” says Covey. “We’re coaching a more sophisticated game and it just takes a while to get all of the gears going.”