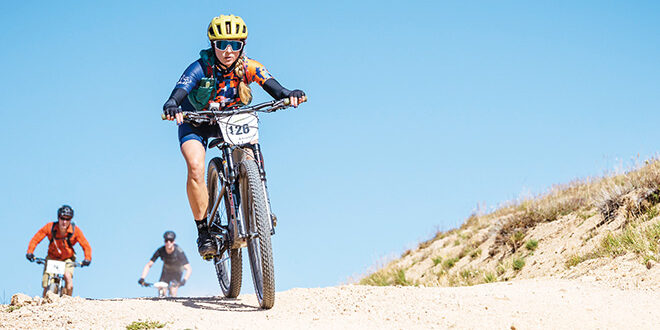 Here we go again. Or, here they go again, I ain’t going nowhere. The Montane Grand Traverse Mountain Run and Bike presented by CB Nordic and Black Diamond is set for this weekend as 350 runners will run from Crested Butte to Aspen, 150 bikers will ride from Aspen to Crested Butte and some will do both.

The two races have gained traction throughout the first eight years of existence building off the success of the winter race as well as the surge in long distance running and biking. Not to mention the uniqueness of the event tying two classic ski towns together via ski, run and bike racing. In fact, both races filled up in record time compared to past years as they provide just the right amount of challenge along a spectacular course that reaches an altitude of 12,336 feet at Star Pass.

“I feel bad because I wasn’t as able to open up the wait list as much this year,” says CB Nordic events director Becky Nation. “People are holding onto their bibs.”

The weekend kicks off Saturday, September 3 at 6 a.m. when runners start in the Mt. Emmons parking lot across from CB Sports and head to the lower section of the Westside Trail, through St. Moritz and then out the Upper Loop, Bridges and Upper, Upper Loop before turning onto Brush Creek Road and head into the mountains. The course follows, more or less, the same course as the winter ski race that includes Star Pass, Taylor Pass, Richmond Ridge and a thigh-pounding, cartilage-pressing 3,000-foot descent down Aspen Mountain to the finish line. All told the course is 40.5 miles long with close to 5,000 feet of climbing strewn throughout the course.

Racers will be met at the finish line with free beer from Aspen Brewing Company and a catered meal including a vegan option. In addition, the top six men and top six women will take home some cash with the winners each getting $1,000 thanks to a grant from the Gunnison County Tourism and Prosperity Partnership (TAPP). Based on times last year, Nation expects the men’s winner to cross the line in Aspen sometime around noon and the women’s winner to cross around 1 p.m.

Then, on Sunday, September 4, 150 bikers will line up at Ajax Park in Aspen for a neutral roll out to the base of Aspen Mountain before turning uphill for an opening 3,000-foot ascent over the first five miles of the bike course.

Bikers will then follow the same course as the runners, more or less, but in reverse before finishing at the Crested Butte Mountain resort base area by the Silver Queen lift. The bike course has a little more to it with 6,000-feet of climbing throughout the 41.02 miles and, based off times from last year, Nation expects the men’s winner to cross around 11 a.m. and the women’s winner coming in at around 12 or 12:30 p.m.

They will also be greeted by cold beer from Aspen Brewing Company, a lunch with a vegan option and some cash as the top six in both the men’s and women’s races will get paid with $1,000 going to the winners.

There will be prizes awarded to top finishers among the folks who opted to run one day and ride the next and the Triple Crown winners will be announced lauding the efforts of the man and woman who have the lowest combined times from the ski race last winter and the run and bike race this summer.

Got friends or family in the race? There will be no live tracking, but CB Nordic will update those that missed cutoff times or pulled out of the race on their Twitter feed @emgtskirace and/or on the Grand Traverse Facebook page.

For a complete course breakdown and any additional information go to thegrandtraverse.org.