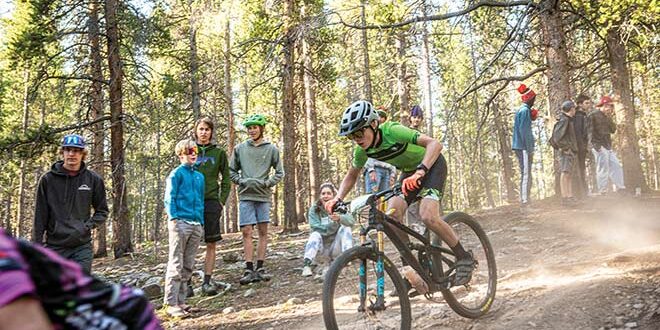 Another race, another team title

For the second race in a row, the Crested Butte Devo high school race team rallied to an overall team title at the Cloud City Challenge in Leadville on Saturday, September 10.

Twelve Crested Butte riders made the trip to Leadville and following the spate of top results across the board, the team is taking Division 3 in the Crystal Conference by storm this year.

“They’ve always been strong riders and good racers, they’re just getting better,” says coach Jenny Smith. “As a group they’re definitely a lot tighter and faster so we’ve been able to step up their training accordingly.”

Finn Veit started his high school race career last year as a freshman and bumped into the JV race class as a sophomore and continues to set the pace among his peers. Veit won in Leadville to rack up the most points among his teammates. Sisters Piper and Katie O’Neill are two of the four athletes who have raced all four years and are staking their claim in the varsity races this season. Piper placed sixth among the varsity girls with Katie coming in ninth to bump up the team total significantly.

That sibling strength carries over on the boys’ side as well as Sam and Kenny Bullock finished first and second in the sophomore race to round out the team total and secure their first place finish. Classmate Ebbet Weinberg had a strong showing as well cracking the top 10 to place eighth in the sophomore class race.

Lance Lakoski is the lone junior among the Crested Butte contingent racing in the varsity class placing 14th, with four-year racers Luca Loperfido and Oliver White finishing in 18th and 20th respectively.

Benjamin Geisler just stepped into the high school racing world this year as a freshman and placed 11th in the freshman class with juniors Cy Davis and Conner Knight placing 27th and 29th respectively in the JV race.

Smith attributes the team’s success thus far in part to consistency among the coaching staff as well as the riders. The team has four seniors who have raced all four years leading the way for the rest of the team in commitment and passion for the sport of bike racing.

The team returns to racing Sunday, September 25 in Snowmass. While the Leadville course had little climbing and relied on athletes’ bike handling skills, Snowmass is a different beast with plenty of ascending on the course.

“Even though we won’t have as much intensity in our training, we will substitute that with climbing,” says Smith.