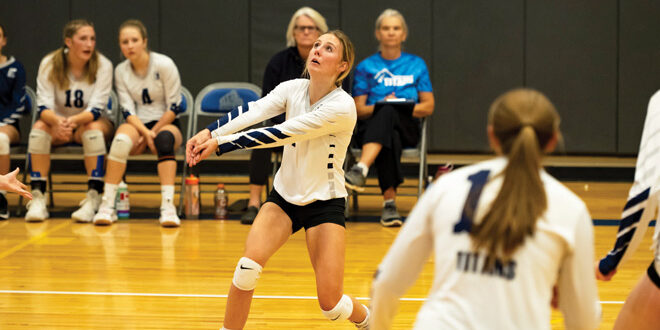 Every match of every week, the Crested Butte Titans volleyball team continues to limit the small mistakes and build momentum and coach Sheri Covey believes they’re on the cusp of turning a significant corner.

They got a big test when they hosted the Sanford Indians on Saturday, September 17. Sanford typically finishes in the top two spots of the league including this season where they are currently at the top of the league standings and ranked ninth in the state.

While Sanford’s penchant for volleyball success had them the odds-on favorite to take down Crested Butte, Covey still thought they could make a run at Sanford.

“I actually think we’re playing so much better now that we could surprise Sanford a little,” says Covey.

Sanford opened the match on Saturday rolling to a 25-11 win, but Covey saw some things working well, just not entirely.

“We were passing well but just couldn’t get our offense to go,” says Covey.

Crested Butte started to put more together for the second set and were in the mix against Sanford before falling 25-17. The Titans continued their upward trajectory in the third set but fell 25-18 to lose the match.

Annie Collins led the Titans with nine blocks, Ellie Duryea had 25 kills and 13 digs and Blakeley Reynolds had 14 kills and 12 digs. Paige Stewart led the team from the service line with 10 serving points including two aces.

“The passing was the best I’ve seen all season and the offense started clicking,” says Covey. “They stayed in it for a long time.”

They are currently in a massive stretch of home matches as they host Buena Vista, Monte Vista and then Telluride on Friday, September 23 for the Titans Homecoming match at 6:15 p.m.

Covey is looking to see the team continue to gain momentum as the week progresses to get their energy up against a tough Telluride team.

“If we see a win in either of those first two matches, it will change everything inside the players,” says Covey. “Telluride is a known great team and to get a chance to play a team like that always brings our level up. I have hope but it’s all about when the players start to get it. If we can get some of those little mistakes corrected, we can be consistent enough to grab some of the close matches.”