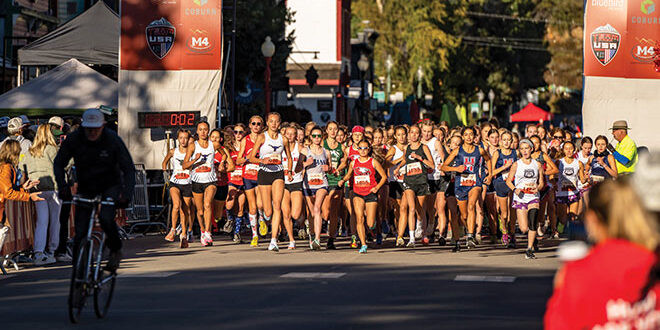 It has now become a tradition, and a great one at that. The Crested Butte Titans host a high school cross-country meet every year as part of the annual Elk Run 5k and it continues to draw teams from throughout the state with 17 teams showing up for the race this year on Saturday, September 24.

“We’re so grateful for Emma Coburn and Joe Bosshard, the Elk Run and all of the support they give our team,” says coach Shari Sullivan-Marshall. “It’s such a special high school meet and our runners get pumped up to run at home and showcase their hard work here in Crested Butte.”

Fourteen Titans toed the line Saturday morning for the race surrounded by over 100 runners in both the boys’ and girls’ races including some big 4A programs from the Front Range.

“It definitely helped that no matter where they were in the field, they always had someone to chase,” says Sullivan-Marshall. “At some of the smaller meets, runners can end up out on course on their own and that’s tough.”

The girls race kicked off first with all of the pomp and circumstance set for the Elk Run 5k as teams were called into the start corral. Senior Ruby Pendy was in the mix surrounded by runners from some of those bigger schools. Pendy held her own to place seventh overall running 20 seconds faster than she did last year in the same race. Freshmen Sophia Bender and Josie Feier were next to cross the line and set personal record times in their young careers.

“It was fun to have both of them run fast,” says Sullivan-Marshall.

Freshmen Aubrey Laird and Ilo Hawley had tough races on Saturday, but junior Lilla Laird continued her season long effort of improving with each race. The team finished the day ninth out of 17 teams.

The boys then filed into the start area with the same ceremonious call up and sophomore Jake Pendy cut 10 seconds off of his personal record and ran a minute faster than last year to place 11th.

“It’s so great to see that kind of improvement,” says Sullivan-Marshall. “It was a huge jump and he’s learning how to challenge himself in a race.”

Freshmen Flint Hoyt set a new personal record as well, his third in as many races, and broke the 20-minute mark. Cody Pleak was another Titan who fed off the energy to set a personal record while freshmen Colby Smith and Max Sullivan flirted with new personal record times. Freshmen Cole Wimett and junior Connor Brown closed out the Titans’ effort on the day with their races.

The Titans head to delta on Friday, September 30 and Sullivan-Marshall hopes to have her entire team back in action and ready to continue their upswing from the past three weeks.

“I’m hoping everyone can run, we’ve been battling some illnesses and kids are a bit worn out,” says Sullivan-Marshall. “Delta is a good time for us to run fast and show our fitness.”