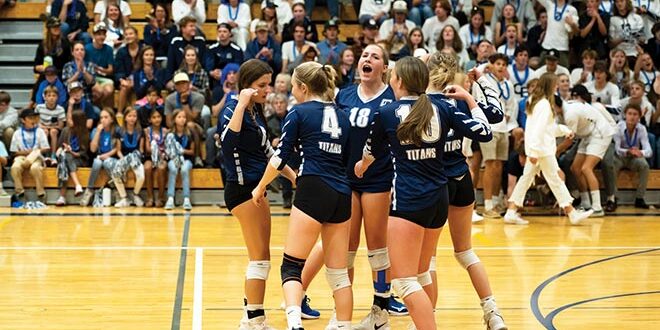 “Right now, it’s about getting them better, more confident and building on that”

The Crested Butte Titans volleyball team had a big stretch of home matches last week and while they dropped all three, they didn’t go down without a fight and look to build off their efforts.

“It was not our best outing,” says coach Marla Covey. “We didn’t do some of the things we had been doing and I feel like we went backwards that match. You’ll have days like that.”

The Titans then took Wednesday off with much of the team playing in JV matches and Covey looked to the varsity players to take the time off to regroup before returning to their home court to host Monte Vista.

“They had to turn things around themselves,” says Covey.

And it looked as if the Titans did just that from the opening serve against Monte Vista as they were in the mix of an intense battle in the first set of the match. The two teams battled back and forth and were tied up 24-24 destined for an extended set. Every time Monte Vista pulled ahead by one and were sitting on a match point, the Titans would tie it back up with both Ellie Duryea and Blakeley Reynolds coming up with big hits when it mattered most. Ultimately though, Monte Vista held on to edge out the first set 31-29.

“That was a good one,” says Covey. “We didn’t crumble which was nice to see.”

The second set was much like the first with the Titans taking a two-point lead, Monte Vista tying it back up, Monte Vista taking a slim lead and then Crested Butte tying it back up. The two teams were tied up 23-23 when Monte Vista tallied the next two points to win the second set 25-23. At that point, the Titans reserves were tapped and they fell in the third and final set 25-13 to lose the match. Duryea led the team with 20 kills and 25 digs, Reynolds had 15 kills and 19 digs and Mandala Covey Bleiberg led with 15 service points followed by Annie Collins with 13.

“We battled and I think we surprised Monte Vista a little bit,” says Covey. “I think we just lost our bearings in the third game. I was happy with the way we played though.”

Crested Butte closed out the week with their Homecoming match against the Telluride Miners on Friday, September 23. The Miners have had Crested Butte’s number for years including taking the Titans down earlier this season. But, after a gutsy performance the evening before, the Titans came into the game energized. Unfortunately, an injury the night before flared up so the Titans lost one of their big hitters up top and were forced to move players around.

Nevertheless, they put up a good fight before losing in straight sets 25-23, 25-14, 25-16. Reynolds moved from left hitter to middle hitter and tallied 15 kills, Duryea had 13 kills, Bleiberg Covey recorded 36 assists and Olivia Reamer and Maddie Roberts each had eight digs in the match.

“We came out swinging and even though we had to switch things up, they actually did pretty well,” says Covey. “We just had too many mental errors in the third set. Overall, I think we learned how to battle better and, hopefully, it gave the players some confidence that we can play with those better teams. Right now, it’s about getting them better, more confident and building on that”

The Titans head to Del Norte on Friday, September 30 and then remain on the road to face South Park on Saturday, October 1.

“It would be nice to pull out a win or two before the break,” says Covey. “We can, just depends which team shows up.”