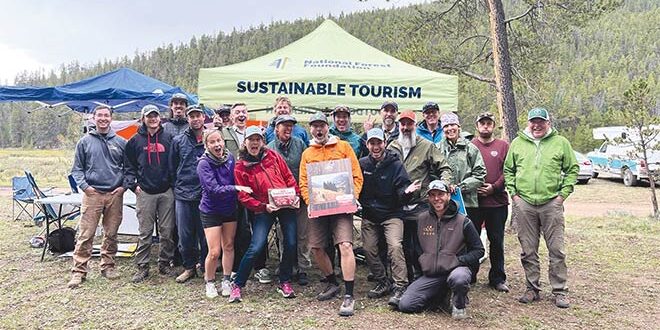 STOR receives Starburst Award for use of lottery funds

The Gunnison County Sustainable Tourism and Outdoor Recreation Program was awarded a Starburst Award this month in recognition of its work in the past three years to make sustainability improvements across the Gunnison Valley. The award recognizes excellence in the use of lottery funds already deployed, specifically two Great Outdoors Colorado (GOCO) grants the county was awarded in 2019 and 2020 totaling $810,000.

There were eight total 2022 Starburst Award winners, chosen based on the creativity of the project, economic and social impact on the community, and whether the project achieved its goal.

The award recognized the STOR Committee for its work in a Colorado Lottery press release this summer: “Negative environmental impacts affecting the Gunnison community from increased visitation to public lands, evolving recreation styles, human and wildlife interaction, and climate change drove the county’s decision to make sustainability improvements. Approached collaboratively, the community created the STOR program, which brings together stakeholders to better navigate a variety of land use issues.”

Joe Lavorini, Gunnison County stewardship coordinator and Southwest Colorado program manager for the National Forest Foundation, detailed the STOR committee’s work. “With those funds, we were able to implement the designated camping project around Crested Butte, construct the Shady Island River Park in Gunnison, build a toilet at Tent City, create Leave No Trace messaging throughout the valley, and employ the STOR Corps conservation corps, among other accomplishments,” he said.

The Starburst Award was presented to STOR at the conclusion of a volunteer event at Trail Creek near Gunnison on Thursday, August 25. The STOR Corps and STOR Committee are working on the Trail Creek Wetland Restoration Project to restore degraded wetlands and mimicking the role of beavers in the ecosystem.

Share
Previous Bridges of the Butte Townie Tour all stars:
Next School District ahead of state in school assessments