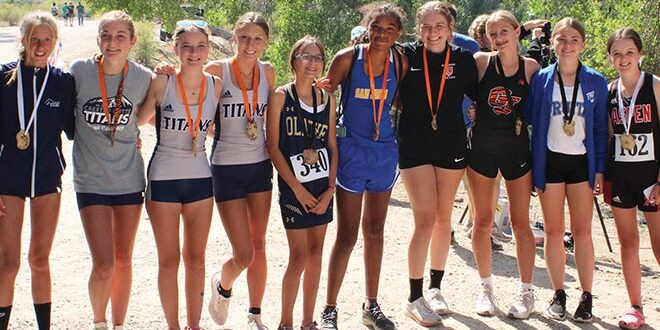 Crested Butte Titans cross-country coaches Shari Sullivan-Marshall, Vince Rogers and Laura Puckett Daniels took a different path to the start of the season this year and based on how their first race of the season went, it appears the plan is working well.

Typically, the cross-country team will get one, sometimes two, races in by this time in the season. This year though, the coaches decided to hold off on the race schedule until the Tiger Invitational in Grand Junction on Saturday, September 10.

“We wanted to give them a solid five weeks of training without a race and that allowed us to increase our training,” says Sullivan-Marshall. “They were ready.”

The race format opened the door for the coaches to get runners who were ready into varsity races while also getting new members of the team into JV races, so they weren’t overwhelmed by their first high school race.

“Ten of our 17 runners had never run a high school race before so we wanted to set them up for success and this was the perfect place to do it,” says Sullivan-Marshall.

Three Titans toed the line in the girls varsity race and senior Ruby Pendy continues to lead the way as she finished in second place overall out of 60 runners posting a time 50 seconds faster than her effort on the same course last year.

“She ran a smart race and it was great to see her hard work over the summer and at the start of the season pay off,” says Sullivan-Marshall.

Sophomore Paloma Lamar has been mixing in soccer with cross-country workouts this fall and tested the waters of varsity racing coming in 41st place while junior Lilla Laird finished in 52nd place cutting over a minute off her time in Grand Junction last season.

“Paloma ran an awesome first 5k and it was fun to see Lilla really challenge herself,” says Sullivan-Marshall.

“It was good for him to see what he can do out there,” says Sullivan-Marshall.

Sophomore Giles Billick and juniors Matthew Howe, Ethan Kaufmann and Connor Brown also battled it out in the varsity race to bring a team score element to the Titans effort for the first time in a while.

“They’re all learning where they can push themselves,” says Sullivan-Marshall. “The two varsity races gave us a lot of information to work with.”

The Titans will remain in the valley this weekend to race in the Mountaineer Cowboy Invitational on Saturday, September 17 in Gunnison. With 17 total runners getting into the two varsity races, Sullivan-Marshall looks forward to seeing the athletes develop a team effort in Gunnison.

“From now on we’ll be scoring as a team in all of our races,” says Sullivan-Marshall. “It’s great to get back to the team aspect of cross-country.”

The race starts behind the Gunnison Middle School with the boys race at 11:15 a.m. and the girls race starting at 11:45 a.m. The Titans remain at home the following weekend as they all will compete in the Elk Run 5k on Saturday, September 24.

“We have two local meets in the next two weeks, it’ll be great,” says Sullivan-Marshall.