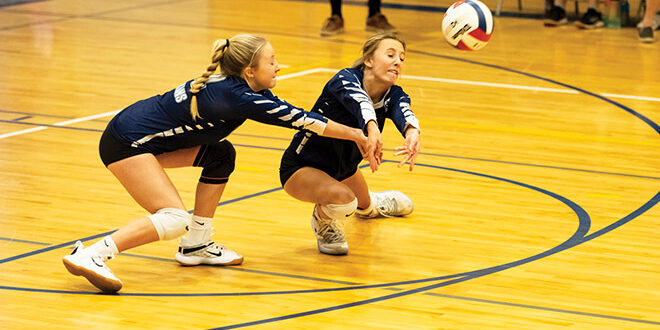 While the opening weeks to the season of road matches and tournaments week in and week out accelerated the development of the young Crested Butte Titans volleyball team, it also wore the team down as nagging injuries popped up leaving coaches Marla and Sheri Covey to shift line ups and ask players to play new positions in nearly every match.

This past week, the Titans started to see a light at the end of the tunnel as players started returning to the floor for matches and after falling to Gunnison, the team rallied the next day to edge out a five-set match win over Trinidad.

“We didn’t really have anyone on our team with much experience when we started and now they’re starting to get that experience,” says Sheri.

The Gunnison match Friday, September 9 fell in their laps when Gunnison’s original opponent canceled last minute. Never ones to turn away from a match, the Titans answered the call to fill in last minute and headed to Gunnison.

The Titans got a big boost to their line up as senior Blakeley Reynolds stepped onto the floor for the first time this season, yet were still missing another starter leaving Marla and Sheri to mix things up once again.

“They were still kind of freaked out playing Gunnison and we had to make some line-up adjustments but having her back helped take some pressure off the other players,” says Marla.

While the Titans fell to Gunnison in four sets, there was some new energy on the team out on the floor that had the team more energized.

“They played more cohesively, it helped having a senior walk back on the court,” adds Sheri.

The Titans then hosted Trinidad the next day in Mt. Olympus and while the energy from Friday’s effort remained, home court nerves still lingered among the players as they dropped the first set 25-12. Sparked by a nine-point service effort from freshman Maddie Roberts the Titans regrouped for the second set to win 25-23 only to drop the third set 25-12.

Down but not out, Crested Butte picked up their game thanks in part to a six-point service effort by sophomore Mattie Halverson to win the fourth set 25-17 forcing the match into a fifth and final set.

“They dug deep and we talked to them about believing they can do it,” says Marla.

The fifth set of a volleyball match is always intense as teams play to 15 rather than 25 leaving little room for recovery. The two teams traded off points and the Titans were up 14-12 looking to seal the win. Trinidad won the next point to pull within one but missed on their next serve and the Titans won the set 15-13 and the match. Ellie Duryea led the team with 21 kills followed by Reynolds with 15 and middle hitter Annie Collins recorded eight. Setter Mandala Bleiberg-Covey tallied 10 assists in the match.

“They were overjoyed to persevere and win that fifth set,” says Sheri.

“We’ve been coaching them how to play to win instead of not to lose and this was one small step in that direction,” adds Marla.

Their new energy will be put to a serious test this next week as they host Sanford on Saturday, September 17 at 5 p.m. in Mt. Olympus and remain at home to host Buena Vista on Tuesday, Monte Vista on Thursday and then Telluride for Homecoming on Friday, September 23 at 6 p.m.

“We have a good stretch of matches coming up,” says Sheri.