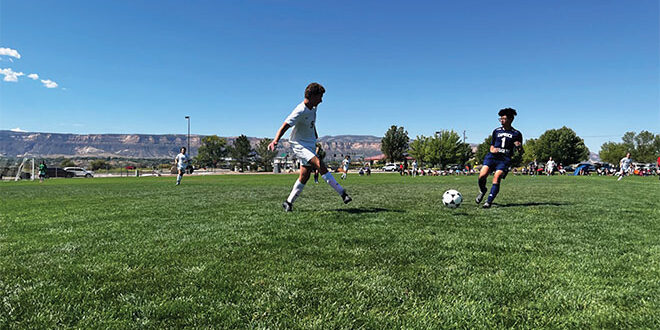 Caprock has always struggled in the league as the school continues to try and build their soccer program up yet continue to suffer lopsided losses. Knowing that, the coaches hoped to use the game to get additional players time to develop a sustainable bench for later in the season.

“The biggest thing is we wanted to see more of our non-starters and swing players to see what they could do,” says coach Bob Piccaro. “And, to see some of the things we’ve been working on with the starting unit like movement off the ball and getting in sync between our midfield and strikers.”

The Titans followed through on both goals early on as Crested Butte opened the scoring in the third minute when Jacob Bernholtz got on the end of a cross from Blue Gardner to score. Three minutes later Gardner punched home a corner kick from Jamis Matlock and then struck again seven minutes later following on a shot from Bernholtz to score on the rebound for a 3-0 lead.

Caprock was obviously worn down by the opening 20 minutes and when the Titans mixed in players from the bench to get additional experience on the field, Crested Butte started to pull away even more.

Joe Syson floated a left footed shot from 25 yards out over the Caprock keeper and into the net. Sawyer Barney then set up older brother Ben Barney for a goal 90 seconds later and the Titans pulled ahead 6-0 just two minutes later when Syson assisted a goal by Avi Narayana.

Ben tacked on a seventh goal when he fired a shot from 25 yards out and Kai Greene closed the first half scoring run finishing of an assist from Sawyer for an 8-0 Titans’ lead at halftime.

“I think the starters just wore Caprock down,” says Piccaro. “It’s like a boat filling up with water, sooner or later it’s going to tip over.”

The starting 11 returned to the field to continue their effort on quicker play and tacked on the ninth goal of the game in the fourth minute of the second half as Bernholtz knocked in a corner from Matlock. Piccaro started filtering players back into the game and after a stretch of chaos, the Titans finished the game 20 minutes into the second half as Narayana scored off an assist from Ben to end the game 10-0.

“We still saw some things we wanted to see,” says Piccaro. “Some good and some not so good. It was good training for us in that they saw when they move the ball, it makes things happen.”

Crested Butte has a big week this week with three matches in five days including Vail Mountain and Ridgway on the road and a home game against Colorado Rocky Mountain School on Friday, September 9 at 4 p.m.

“Vail Mountain will be a good test and we close the week away at Ridgway,” says Piccaro. “We’ll get to see how we stack up against quality teams. We have to be ready for every game and take it one game at a time. I’m curious about what we’ll see this week. Whether we win or lose, we have to keep moving forwards.”